Australia's Senate has rejected a proposal to hold a non-binding referendum on gay marriage, arguing it would be expensive and spark divisive debate. Gay marriage advocates vow to push for parliament to take action. 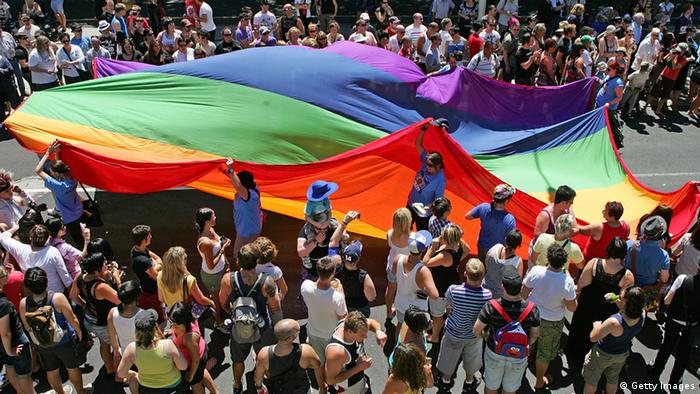 The Australian government has announced plans to hold a plebiscite early next year on whether to legalize same-sex marriage. Critics warn the vote is an expensive exercise that will only give a platform to homophobia. (13.09.2016)

A discussion in parliament is due Tuesday, but with Labor rejecting the plebiscite, the next steps remain unclear. A conservative Liberal Party leader accused Labor of playing politics with the issue. (11.10.2016)

A member of parliament from the ruling coalition, has defied party doctrine by presenting a draft law on marriage equality. The Liberal Party has been staunchly opposed to the issue despite public opinion. (17.08.2015)

Gay marriage advocates pledged Tuesday to keep fighting for parliament to change Australia's laws to allow same-sex couples to marry legally. Australia's upper house had rejected a government proposal 33-29 for a plebiscite of 15 million people on the issue. But after several gay senators, including Labor's Penny Wong and Louise Pratt, made impassioned pleas against the plan, saying it would subject their families to hate speech, prominent gay rights advocates agreed.

"The plebiscite was a policy that no-one will miss, yet wasting time dancing on its grave will not achieve marriage equality," Australian Marriage Equality chair Alex Greenwich said. "Now that the prospect of a plebiscite has been defeated, no-one need be distracted by a debate by politicians on a public vote versus a parliamentary vote."

Prime Minister Malcolm Turnbull's conservative government had planned a February 11 referendum to end what's been a long-running debate in Australian society. He argued that a public vote - around $130 million, (117 million euro), would allow all Australians to express their view.

Many opinion polls show most Australians support gay marriage, but plebiscites and referendums to change the constitution rarely succeed in Australia. The public vote would have carried no legal weight and lawmakers would still have had to change the law in parliament.

The New South Wales Gay and Lesbian Rights Lobby said a conscience vote in parliament - where politicians are not restricted to party policy - was the most appropriate place to resolve the standoff. "Marriage equality is supported by MPs of all persuasions," said the organization's co-convenor Chris Pycroft. "We urge Mr Turnbull to allow his coalition colleagues a vote on legislation so that we can get this done once and for all."

Christopher Pyne, a senior government minister who supports gay marriage, said the government would not make a quick decision on how to proceed now that the referendum had been scuttled. The prime minister's predecessor, gay marriage opponent Tony Abbott, decided on the plebiscite to avoid division within the conservative government's ranks. But incumbent Turnbull, who supports marriage equality, agreed to hold the plebiscite in return for the most conservative elements of his party supporting his successful challenge to Abbott's leadership a year ago.

Lawmakers voted 267-157 to protect same-sex and interracial marriages amid concerns that the Supreme Court overturning Roe v. Wade could jeopardize other rights.

Homosexuality used to be a crime in the small Himalayan kingdom. That changed in 2021, and the LGBTQ community is becoming more accepted, but activists say more needs to be done.

A court in Japan has upheld a ban on same-sex marriage as constitutional. Three same-sex couples had sued for compensation, saying their right to equality and free union was being violated. In a blow to LGBT rights, the court rejected their demands.