In Germany, marriage remains out of reach for gays | Germany| News and in-depth reporting from Berlin and beyond | DW | 24.07.2015

Same-sex couples cannot get married in Germany - in contrast to the situation in the US and some other EU countries. Chancellor Angela Merkel's governing Christian Democrats remain opposed. 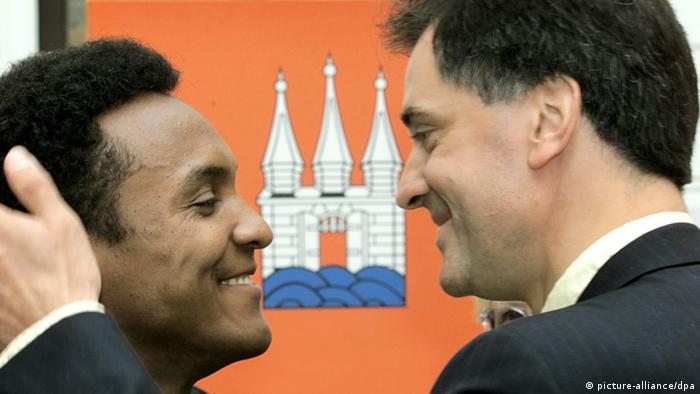 An office door opens and you see what appears to be Angela Merkel's silhouette at the window. The chancellor is typing something into her cellphone. In the background you can hear scraps of sentences being spoken by a presenter relaying the recent news from Ireland: "A clear majority of about 62 percent voted for same-sex marriage. This is a historical turning point in the Catholic nation." Right then, a pretty young woman in a nightgown draws nearer to "Merkel" and embraces her from behind. Merkel tenderly reciprocates the embrace and clearly enjoys it.

Of course, this is only a fantasy turned into a video by the Berlin lesbian magazine "Straight." Reality is quite different for Merkel, reputedly the most powerful woman in the world. She rejects marriage equality and does not want to present any draft legislation on the matter. So, same-sex couples still have many legal disadvantages compared to legally married heterosexual couples. Even gay men and lesbians living in civil partnerships have little chance of adopting children, and, if they do, the process proves to be difficult.

"I find it hard to accept full equality," Merkel told a television program in 2013, before she was re-elected. In this video, you see a homosexual viewer who, with his male partner, is trying to adopt a child. "What reasons lead you to believe that children of same-sex couples are not brought up so well?" he asks the TV presenter and the chancellor.The audience applauds the question.

The audience member who asked the question responds: "But we gay couples are also concerned."

"Yes, I know that, I know," Merkel says, but she has obviously been forced into a tight spot. She does not go into detail about her stance.

Instead, the faction leader of Merkel's Christian Democrats (CDU) voiced his opinion. He asserted that "until proven otherwise, I am convinced that it is in a child's interest to be raised by a mother and father." In other words, marriage means a union of man and woman. On July 24, 52 percent of 12,000 CDU members surveyed were of the same opinion. Internal party opposition does not seem to be growing against Merkel.

The party's stance toward gay marriage

Up until 1993, homosexuality in Germany was a criminal offense, according to a law known as paragraph 175. That year, Justice Minister Sabine Leutheusser-Schnarrenberger stepped in and the law, passed in 1872, was finally abolished. It wasn't until 2001 that the "registered civil partnership" was introduced as a substitute for marriage for couples deemed ineligible. In the last government, the supposedly progressive liberal Free Democrats (FDP), too, opposed marriage equality, keeping in line with the CDU and their Bavarian partners, the Christian Social Union. In 2013, the FDP lost its seats in parliament.

The current coalition of the CDU and Social Democrats (SPD) inspired hope for gay men and lesbians. SPD Justice Minister Heiko Maas had been expected to oppose Merkel more strongly. But new draft legislation by the Justice Ministry does not accommodate the main point of criticism toward the "registered civil partnerships," according to the Greens, who had already introduced the first legislative initiative for gay marriage 25 years ago. Back then, when Helmut Kohl was ruling, it was like fighting against Don Quixote's windmills. Now, the Green MP Volker Beck is particularly keen on backing marriage equality.

No substitute for marriage

Currently, homosexual couples only live in a consensual union, known as the registered civil partnership, which also has many disadvantages compared to traditional marriages.

Adoption laws are complicated and they hinder many applications. State health insurance does not pay for lesbian couples' in vitro fertilization but it does for women married to men. Children of homosexual migrants cannot automatically join their parents, but children of straight couples can. These are only a few reasons why same-sex couples would like to wed. They frequently point out Article 6 of Germany's constitution, which protects marriage but does not define who is permitted to marry. Legal experts state that the constitution does not even need to be amended to facilitate gay marriage.

Just a few weeks ago, the Federal Constitutional Court ruled that registered civil partnerships should be granted the same tax advantages as straight couples. Parliamentarians had to comply and decided to grant gay couples the same fiscal rights. Sadly, there have been growing signs that the changes haven't reached the acting authorities: the revenue offices. Many types of tax software stop working when male-male and female-female are entered, one of Volker Beck's staff members says.

In 24 of the Council of Europe's 47 member countries, marriage equality is recognized to its full extent. Just a few days ago, the European Court of Human Rights in Strasbourg hinted that this should be the case in all member countries. Partnerships are encompassed in the term "family life" and protected by Article 8 of the European Convention on Human Rights. Advocates of marriage equality view the statements in Strasbourg as an imminent turning point for political opinions on the issue - even in Germany.