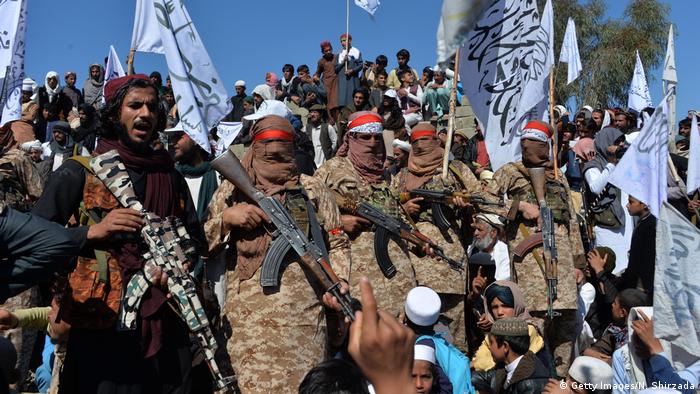 The head of the Taliban's political office in Doha held a video conference with US Secretary of State Mike Pompeo to discuss the Afghan peace process, the Islamist group said on Tuesday.

Taliban spokesman Suhail Shaheen tweeted that full implementation of the Doha accord had been discussed in the talks between the official, Mullah Baradar, and Pompeo.

The agreement, signed between the US and the Taliban in February, includes plans for a withdrawal of foreign forces from the war-torn country in exchange for security guarantees from the insurgent group.

Violence has increased in recent weeks

Rising violence and a contentious prisoner swap have proved a sticking point in getting talks underway that were to have begun in March.

According to the Taliban, Pompeo acknowledged the insurgent group had "lowered the war graph by not attacking cities and major military bases" in the latest talks.

The US Embassy in Kabul did not immediately issue a statement.

Violence had reduced across much of the country after the Taliban offered a brief ceasefire to mark the Islamic Eid al-Fitr festival last month. However, officials say the insurgents have stepped up attacks in recent weeks.

The confirmation comes amid a raging controversy in Washington about when President Donald Trump learned of US intelligence that Russia was paying the Taliban to kill US and NATO soldiers in Afghanistan.

The New York Times on Monday said it had information that Trump had received a written briefing about the bounties in as early as February.

That month, the US had signed the Doha agreement, which meant withdrawing all American troops from Afghanistan by mid-2021 in return for security guarantees in a bid to pave the way for negotiations between the two sides.

Trump has denied being informed of the assessment and the White House said Monday that the information had been kept from him because the intelligence underpinning it was unverified, marking an unusual move since it is rare for intelligence to be proven without any doubt before presenting it to senior government officials.

A UN report has claimed that the insurgents still have a tight-knit relationship with the terror network once led by Osama Bin. Taliban leaders, however, slammed the accusations as "baseless and bigoted." (02.06.2020)