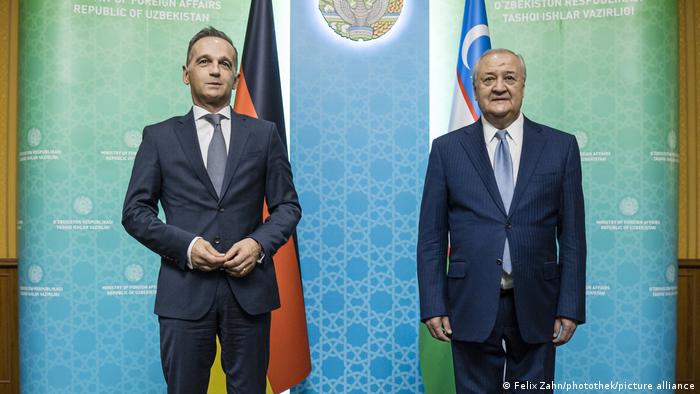 German Foreign Minister Heiko Maas is in the middle of a four-day trip, visiting Turkey, Uzbekistan, Tajikistan, Pakistan and Qatar, to discuss the future of Afghanistan

German Foreign Minister Heiko Maas was in Uzbekistan and Tajikistan on Monday as part of a four-day tour to discuss the situation in neighboring Afghanistan.

Maas said that Uzbekistan had declared itself willing to provide support to Afghans who are still in Afghanistan, but who are eligible to go to Germany and who can reach Uzbekistan via air or land. The details were still being negotiated, Maas said in a tweet.

However, Maas will not take part in discussions with the Taliban over the further evacuation of Afghans who had supported Germany's Bundeswehr, dpa reported. Instead, the German diplomat Markus Potzel will be the country's contact with the Taliban in Qatar.

Heiko Maas 'grateful Turkey will continue to run the airport'

Qatar will be the last leg of Maas's tour of five countries most relevant to the Afghan crisis; he is set to arrive there to meet Potzel on Tuesday, after talks in Pakistan.

The German foreign minister also visited Tajikistan's capital of Dushanbe on Monday, where he called for commercial air travel to and from Afghanistan to be restarted to enable more Afghans to leave.

"Re-establishing air traffic is a clear prerequisite for flying people out on an organized scale," Maas said in Dushanbe. "By land it [the journey] is considerably more difficult."

DW correspondent in Tashkent Nick Connolly said that Uzbekistan had concerns of turning into "essentially a refugee camp for Europe."

"They [Uzbek officials] are very certain and very clear that this is only going to be about transit, and they will not let people stay in large numbers for the long term," he added.

People in Uzbekistan have had mixed opinions about the government's handling of the situation.

While some people were criticizing the government for the slow process of allowing people's entry from Afghanistan, others feared that migration could cause political instability in Uzbekistan, Connolly said.

Turkey reflected these concerns on Sunday when Foreign Minister Mevlut Cavusoglu said taking a new "refugee burden" was "out of the question" for the EU and NATO ally. Maas was in Turkey on Sunday.

So far, Uzbek authorities have allowed the entry of few people from Afghanistan, mostly those who already had visas, politicians, and people from the Uzbek ethnic minority, Connolly added.

The role of China and Russia in Afghanistan talks

Maas also called on China and Russia to be involved in international talks over the future of Afghanistan. A UN Security Council meeting was set to take place later on Monday.

There are efforts underway "to bring all important international partners to the table, and so it will be important that Russia and China are also there," Maas said from Tashkent.

China and Russia are the only members of the Security Council that still have their embassies open and functioning in Afghanistan. The other members, the US, UK and France, all closed theirs as they evacuated personnel from the country.

The foreign minister also denied a report from the German newspaper Welt am Sonntag that only slightly more than 100 local Afghan helpers had been evacuated by the German military.

Maas said that it would take a while to have a concrete number as the passenger lists from the evacuation flights were still being processed, but that it was significantly higher than 100.

Germany flew out over 5,300 people from Kabul airport before ending its operations last week. The country plans to take in some 40,000 Afghans, including people who worked for the Bundeswehr and people at high risk, such as human rights activists.