Opinion: Germany has failed in Afghanistan

The German government is facing the shambles of its Afghanistan policy. But even after the Taliban's triumph, it is being slow to assume any sort of responsibility. That's shameful, writes Marcel Fürstenau. 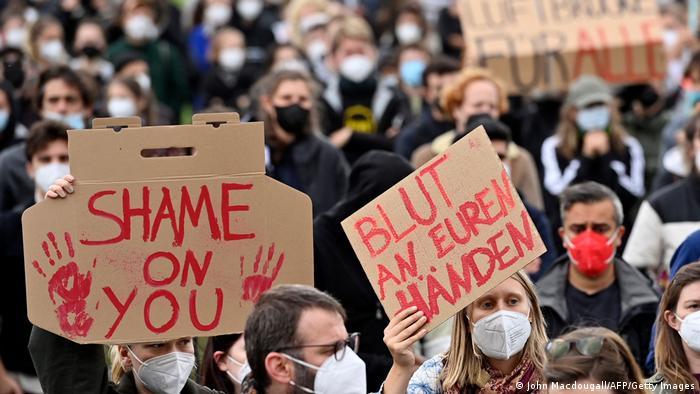 The German government misjudged the situation in Afghanistan. The German banner reads: 'Blood on your hands'

"Get out of Afghanistan!" This has been a demand by Germany's Left party for 20 years — since 2001, when Germany's military mission within the framework of the NATO-led ISAF operation began.

Was this just an easy and cheap demand to make because the opposition party never had to assume the responsibilities of government, and with them the responsibility for combat missions of the German armed forces, the Bundeswehr? The answer is: yes and no.

Yes, because fighting the Taliban and their terrorism was — at least at the beginning of the millennium — linked to a justified hope for progress and democracy benefiting the people in Afghanistan.

And no, because it became obvious rather quickly that this fight could not be won, in view of the fact that one Afghan government after another failed to get a grip on the basic problem of corruption — quite possibly because none of them wanted to.

The West never made a serious effort to change that, and, what is more — as happens so often during military operations — it did not give enough consideration to the culture and history of the country that it set out to pacify.

"Get out of Afghanistan!" This seemingly trite slogan employed by the political lightweight that is Germany's Left party was, in fact, part of the German government's deliberations for many years as well. The question was simply: when? Of course, those who were responsible — above all, German Chancellor Angela Merkel, who has the power to set policy guidelines — knew that the answer to this would be provided by Washington.

The US had always set the pace during this campaign, which was a complete failure in both the military and humanitarian sense. And it also did so recently when "Get out of Afghanistan!" all of a sudden became the order of the day.

Even so, the German government did have some margin for maneuver — more so in the civilian than in the military area. For Germany, and Germany alone, is responsible for the current small-minded, bureaucratic treatment of its own locally hired personnel and their families.

It is appalling and a shame for this German government that many of these people were not flown out of Afghanistan in time. In June, Germany's Foreign Minister Heiko Maas still ruled out a quick Taliban victory. When that very scenario became reality, he put the blame on Germany's Federal Intelligence Service (BND).  Criticism of the service's wrong assessment of the situation may be justified — however, there is much more to the matter.

Any farsighted policy must be prepared for every conceivable scenario. There should have been a Plan B ready — a plan for a quick evacuation of the German Embassy in Kabul and of the many Afghans upon whose support — often at risk of their lives — the German armed forces particularly relied during their disastrous and failed mission. The political coordination needed to handle the situation in Afghanistan was lacking in the hour of military defeat and during the weeks preceding it: The Foreign Ministry, the Defense and Interior Ministries and the Economy Ministry lacked a joint strategy.

Merkel has some explaining to do

The main responsibility for this lies with the chancellor's office, where all the threads come together. This is where key decisions are made during weekly Cabinet meetings. This is the place to which the BND, responsible for gathering intelligence abroad, is answerable and where a secret services coordinator is present.

In short, Angela Merkel now has some explaining to do. For her, as well as for all other people in Germany, all that remains is the hope that the ongoing evacuations of Germans and Afghans, which started much too late, will be successful.

It is still possible to save many lives. To achieve this, no price can be too high, financially or politically. There is one thing, however, that this German government is unlikely to accomplish in the wake of this disaster: win back the trust in it that has been lost in both Germany and Afghanistan.

German COVID rate soars to highest level since May 1h ago

Coronavirus digest: Austria warns of lockdown for unvaccinated 6h ago