Afghanistan: District after district falls to the Taliban | Asia | An in-depth look at news from across the continent | DW | 17.06.2021

Afghanistan: District after district falls to the Taliban

Since the beginning of NATO's official troop withdrawal from Afghanistan on May 1, the Islamist militant group has taken over at least 27 districts from Afghan forces, and the number is rapidly increasing. 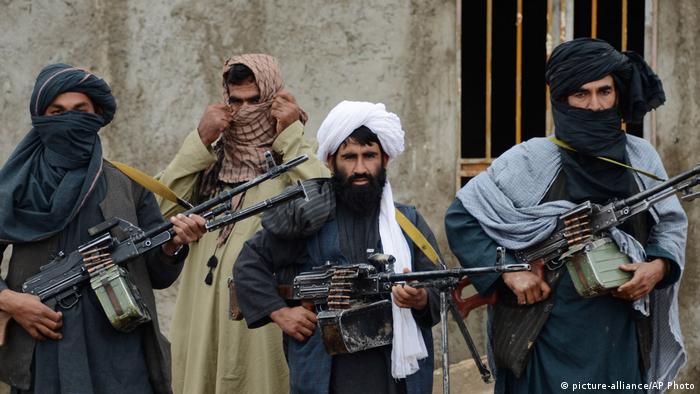 The Taliban are intensifying attacks across Afghanistan to gain more territory ahead of NATO's troop withdrawal in September. The militant group now controls vast swaths of land.

Heavy fighting in many districts in recent weeks has inflicted heavy losses on both Taliban and government forces.

On Wednesday, more than 20 Afghan commandos were killed in the northern Faryab province as they tried to regain control of Dawlat Abad district, which Taliban militants had seized 10 days ago.

The group's attempts to take over district capitals have also resulted in civilian casualties. Many locals in these areas are fleeing for their lives to safe havens.

According to authorities and residents, Taliban fighters have destroyed government buildings in some district capitals after capturing the cities for a short period of time and then withdrawing.

Khan Abad, in Afghanistan's northern Kunduz province district, fell to the Taliban in May, but the militants were subsequently pushed back by government forces.

"There was an explosion in front of my pharmacy. It destroyed everything. I had to leave the area due to heavy fighting. I am left with nothing now," Shirin Agha Azizi, 32, told DW.

Many other residents of the district are suffering due to the ongoing fighting between the Taliban and Afghan forces.

"Many shops in the district have been burned down," Ajmal Arian, another district resident, told DW.

The warlike situation in Afghanistan comes just months after US President Joe Biden announced a complete withdrawal of troops by September 11. European countries with a military presence in the country have followed suit.

Washington, which signed a deal with Taliban last year, is hoping that the militant group will engage in intra-Afghan talks and work with the government to consolidate the peace process.

Afghan President Ashraf Ghani's government has repeatedly urged the Taliban to declare a countrywide cease-fire. However, attacks across Afghanistan have increased instead.

"Taliban leaders know they can defeat the government in Kabul. Therefore, we have seen a surge in their attacks on Afghan districts," he added.

Gulzar Sangarwal, head of the provincial council in Laghman province, said Afghan security forces had been weakened as they no longer have NATO air support.

Despite claims by some Western officials that Afghan security forces are strong enough to deal with security challenges, the situation on the ground appears to be exactly the opposite.

"Afghan security forces are financially and militarily dependent on the US," said Mohammad Shafiq Hamdam, a Kabul-based security expert. "And, without its support, they will be in a tough spot."

The Taliban are not the only threat to Afghan forces; militant groups such as "Islamic State" (IS) have also gained a foothold.

Violence against civilians has spiked in Afghanistan in the past few months. Last month, an explosion outside a girl's school in Kabul killed at least 68 people — all of them civilians, with most of the victims being young girls between the ages of 11 and 15. The blast also left more than 100 people injured.

The Taliban denied attacking the health workers, but police spokesman Farid Khan said the group had targeted "health workers to deprive people of polio vaccines" in the past.

Last week, IS fighters attacked a group of mine-clearing workers in the north of Afghanistan.

Afghan authorities said the assault killed 10 people and left at least 14 injured. The attack happened in the Baghlan-e-Markazi district of Baghlan province, to the north of the capital Kabul.

"Civilians suffer the most in wars. A few days ago, a bus was hit by a landmine, killing dozens of people. This needs to stop," Mohammad Wali, a Kabul resident, told DW.