Afghan Taliban meet with Chinese officials after talks with US collapse

A Taliban delegation has met with China's special representatives for Afghanistan in Beijing. The meeting comes after US President Trump unexpectedly called off talks with the Taliban earlier this month. 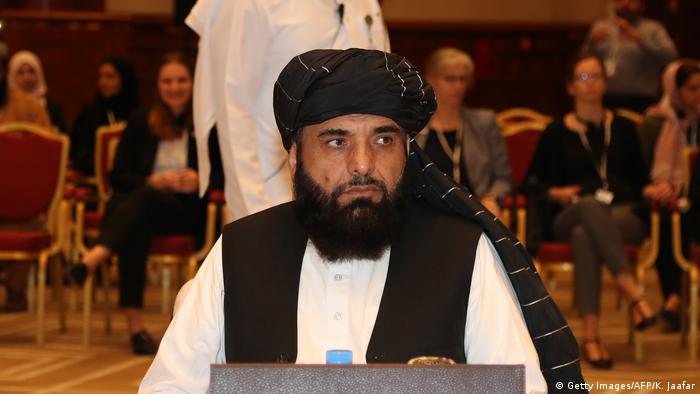 Suhail Shaheen, spokesman for the Taliban in Qatar, attends the intra-Afghan dialogue talks in Doha

Suhail Shaheen, a spokesman for the Afghan Taliban in Qatar, has said the group's delegation held talks with Chinese officials on Sunday.

The topic of discussion with Chinese officials was reportedly the canceled talks with the US.

"The Chinese special representative said the US-Taliban deal is a good framework for the peaceful solution of the Afghan issue and they support it," Shaheen said.

There is no immediate endorsement of the claim from China's foreign ministry.

A Taliban delegation also visited Beijing in June. At the time, China said it favored an intra-Afghan dialogue to end the 18-year-long war.

China shares a short border with Afghanistan to its far western region of Xinjiang. Beijing has long been worried about links between militant groups operating in Xinjiang, home to the Turkic-speaking mostly Muslim Uighur people.

Expressing his frustration over the Taliban's behavior, US President Donald Trump called off peace talks with the insurgent group on September 7. Trump's announcement came after the Taliban admitted to a car bombing at a security post near NATO's Resolute Support mission headquarters in Kabul. Two NATO soldiers — one US and one Romanian — were among 12 people killed in the attack.

Earlier this month, Shaheen told DW that the Taliban had reached an agreement with the US in Doha. "We had finalized the document about how the agreement would be implemented … The US president's tweets took us by surprise. We still don't understand how the US can call off the deal that took months to negotiate and finalize. This move has undermined the US' credibility," Shaheen said.

In his latest tweet, Shaheen quoted Taliban leader, Mullah Baradar as saying that "if the US president cannot stay committed to his words and breaks his promise, then he is responsible for any kind of distraction and bloodshed in Afghanistan."

Afghanistan is set to hold a presidential election on September 28. Afghan President Ashraf Ghani hopes a re-election would put him in a better position to negotiate peace with the Taliban.

The Taliban, on the other hand, have intensified attacks in Afghanistan. The group, whose government was toppled by the US in a 2001 invasion, opposes democratic elections in the war-ravaged country.

The insurgents, however, said they are willing to return to the negotiating table. But experts say the resumption of talks is unlikely until a new government in Kabul takes charge.

Taliban spokesman: Ceasefire is 'on the agenda'

The Taliban continue to attack civilians in Afghanistan despite reportedly pledging to negotiators in Qatar that they would stop. What is the militant group trying to achieve by continuing these violent attacks? (26.07.2019)