A suicide truck bomber devastated a hospital in southern Afghanistan, leaving 20 dead and up to 100 injured. The Taliban claimed responsibility for the attack. 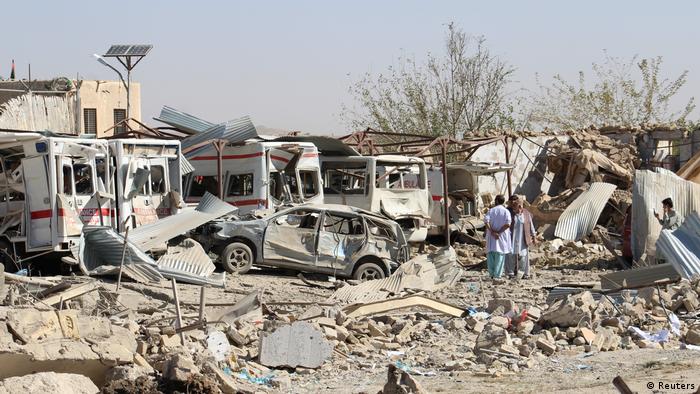 A suicide bomber driving a truck full of explosives destroyed part of a hospital in southern Afghanistan on Thursday morning, killing up to 20 people and injuring more than 90.

The Taliban claimed responsibility for the attack, which is the latest in nearly daily attacks since peace talks collapsed with the United States earlier this month.

Zabihullah Majihed, a Taliban spokesman, said the target was a nearby intelligence center, adding that the bomb had left "tens of intelligence operatives killed/wounded."

The wall of the nearby National Security Department building was partially destroyed, but Atta Jan Haqbayan, head of the local provincial council, said he could not confirm if there were any casualties. 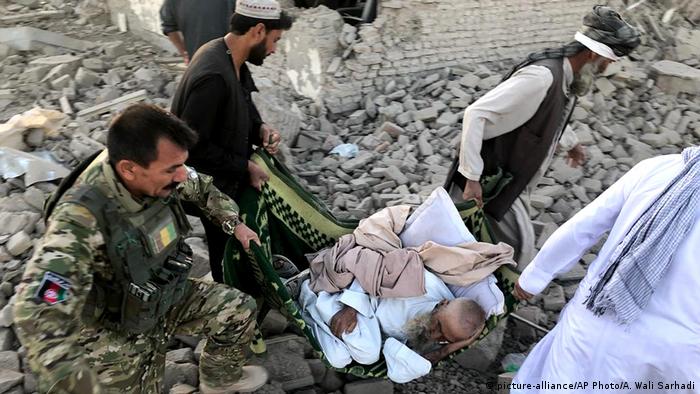 Workers search through the rubble at the site of the attack in Qalat, Afghanistan

The explosion left part of the hospital in ruins, which is located in Qalat, the capital of the southern Zabul province. A number of ambulances were left broken and a mosque attached to the hospital building was also damaged.

Morning prayers had just finished when the bomb was exploded in front of the entrance to the hospital. Residents used shawls and blankets to carry wounded people inside the destroyed building, while authorities transported the more seriously injured to nearby hospitals in Kandahar. Many of the dead were women and children.

There were conflicting death tolls in the hours immediately following the attack. The governor's spokesman Gul Islam Seyal earlier put the number of dead at 12, but those on the scene estimated the number to be closer to 20. 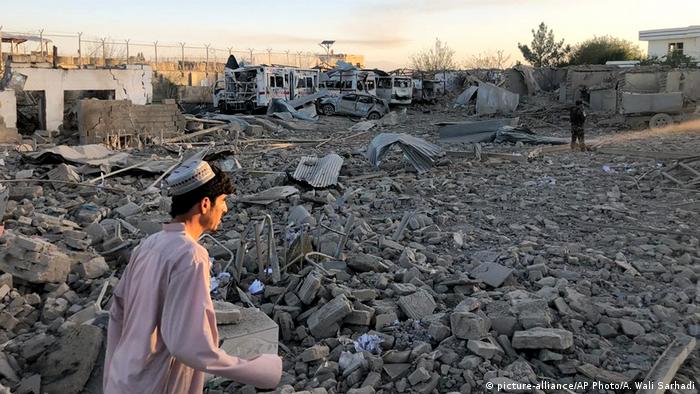 The attack is the continuation of a bloody week in the lead-up to national elections. Tuesday saw two separate attacks, one of which targeted Afghan President Ashraf Ghani's election rally and killed 48 people. The Taliban also took responsibility for these attacks.

The president's spokesman, Sediq Sediqqi, tweeted in response to Thursday's attack that the Taliban "continue to target civilians while their leader travel to Iran and Russia."

Afghan presidential elections are set for September 28. The attacks claimed by the Taliban have intensified since US President Donald Trump abruptly ended peace talks with the group earlier this month.

Officials also announced on Thursday that at least 30 civilians were killed and 40 were injured in an air strike conducted by the Afghan security forces in eastern Afghanistan, with US air support.

The air strike took place on Wednesday night. The attacks aimed to destroy a hideout used by the so-called Islamic State, but accidentally targeted farmers instead.

The defence ministry in Kabul confirmed the strike but refused to specifiy casualties.

The Red Cross has fully resumed operations in Afghanistan after the Taliban said they had agreed to "new promises in humanitarian aid." The militants also pledged security guarantees for aid workers. (15.09.2019)