Afghan refugees could get money to return home

Germany's interior minister appeals to failed Afghan refugees to return home to safe areas. Thomas de Maiziere is in Kabul to work out a remedy with the Afghan government, which may include financial incentives. 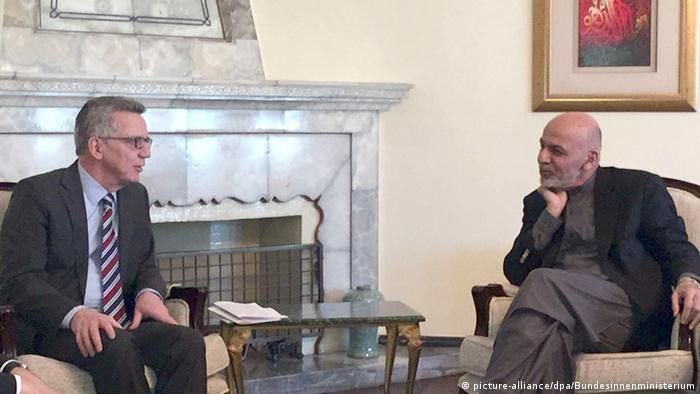 In a warning to those Afghans seeking asylum in Germany, De Maiziere said that many would be sent home over the next few months.

His remarks came during a trip to the Afghan capital Kabul, following a 15-fold rise in asylum claims from the war-torn country in 2015, compared with a year earlier.

More than 150,000 Afghans applied for asylum in Germany last year, up from just 9,700 in 2014. Afghans make up the second-largest group of refugees in Germany, behind Syrians.

De Maiziere told the German news agency DPA that smugglers were promising "paradise-like conditions in Germany" in return for money, as the security situation worsens.

But he said those found to be seeking better economic prospects, rather than fleeing persecution, would be refused permission to stay in the country.

"There is no welcome money in Germany, " he told Afghans on Monday. "There's no guarantee of a a job or an apartment and the prospects of being given a right to stay is low."

He also warned that the journey to Europe was dangerous and that those thinking of leaving should "not believe those who spread the rumors." 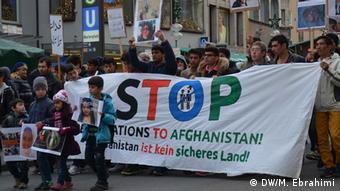 Afghan migrants in Munich have protested their expulsion

De Maiziere, who is Germany's Interior Minister, met his counterparts in Kabul to find a solution to the large numbers of people leaving Afghanistan and to improve resettlement conditions for unsuccessful migrants.

"Of course the security situation in Afghanistan is difficult," de Maiziere admitted. "But there are unsafe and protected regions," adding that returning migrants can make a good life in safe areas of the country.

He said German and NATO troops would remain in Afghanistan for "as long as necessary" and that an exodus of educated Afghans had to be prevented.

De Maiziere said he wouldn't rule out the possibility of financial incentives for those wanting to rebuild their lives back home. At present, unsuccessful asylum applicants can claim the costs of their flights home.

German Chancellor Angela Merkel has promised to reduce the number of migrant arrivals this year, after 1.1 million refugees entered the country in 2015. In December, she singled out Afghan refugees for return.

German officials estimate than less than half of Afghans who apply for asylum have a right to stay.

A public awareness campaign has been launched in the conflict-torn nation to tell would-be migrants to stay put.

De Maiziere's received a reminder of the security situation on Monday when a suicide bomber attacked a police base in Kabul, killing at least nine people.