Alexander Gauland, the top candidate for the right-wing populist Alternative for Germany, has told DW there should be a clear path for repatriating migrants. Accepting refugees is not in Germany's interest, he said.

Alexander Gauland is the top candidate for Alternative for Germany (AfD) in September's general election. In an interview with DW Editor-in-Chief Ines Pohl and reporter Jaafar Abdul-Karim, he said that Germany and Europe's borders should be closed. The former, long-time member of Chancellor Angela Merkel's conservative Christian Democrats (CDU) said it is wrong that people without papers can enter Germany. "These people shouldn't even be allowed into the country," he said.

Ayslum seekers should be in asylum centers outside Germany, even outside Europe, where they can apply for asylum if they really qualify, he added. Those fleeing a war zone, such as Syria, are entitled to only limited asylum according to the Geneva Convention, he said. Gauland is running with Alice Weidel as right-wing populist party's top candidates for the Bundestag. 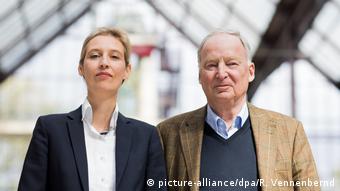 Most migrants are arriving for economic reasons, and while people have a legitimate right to seek a better life, he said, it is equally legitimate for a state to deny them a place. "We have to take our own interests into account, and taking in masses of refugees is not in the interests of Germany," Gauland said, adding that Germany is "not the world's doormat."

"It's all voluntary, nobody's forcing them to come from southern Africa to or through Libya," he said. "So anybody who comes through Libya of their own accord can also be sent back there."

The AfD has grown in popularity since the height of the refugee crisis in 2015. Germany's refugee policy is one of the party's core issues for the 2017 general election campaign. The party holds seats in 13 of the country's 16 state parliaments, and could enter the Bundestag for the first time in the general election on September 24. Polls suggest it may capture 8 percent of the vote. The threshold to hold seats is 5 percent.

"Chancellor [Angela Merkel's] misguided refugee policy is a gift to the AfD," said Gauland, who quit the CDU in 2013 after more than four decades working for the party.

Islam: No place in Germany

The AfD stands in contrast to Germany's other parties not only on refugees, but also on the topic of Islam in Germany, which is home to around 5 million Muslims. "Islam as a cultural and religious entity has no place in Germany," Gauland said, underlining a stance contained in the AfD's party platform. "It disturbs me that Islam, with its Sharia law and certain provisions, is a religion that we can clearly say is not compatible with the Basic Law." 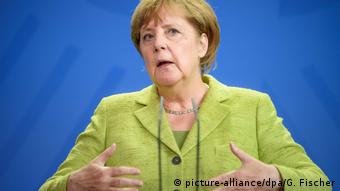 Gauland called Merkel's refugee policy 'a gift to the AfD'

Gauland went onto say that while the Basic Law, Germany's constitution, protects one's private beliefs, "what is not OK is to open a so-called back door to the gradual insertion of Islamic rules."

When asked why he himself does not meet with Muslims, Gauland said: "I have no need to talk to Muslims in any official capacity. But if I have somebody at hand, then of course I'm ready to talk to them. That's not a problem."

'Russia will never give Crimea back'

On foreign policy, the AfD opposes sanctions placed on Russia following its illegal annexation of Crimea. "Russia will never give Crimea back," he said. "I don't think sanctions will have any effect."

Gauland opposes EU membership for Turkey, saying: "All payments in this regard should be stopped immediately." However, he said the AfD would like to see Turkey remain a part of NATO, "provided [President Recep Tayyip] Erdogan refrains from neo-Ottoman policies."

"During the Cold War, Turkey was always a sentry," he added. "I see no reason to exclude it from the alliance."

Gauland is responsible for the AfD's foreign affairs "to a certain extent," he said. "But an anarchistic party doesn't have a real boss. And that's what we are." The AfD is well known for its regular infighting.

The DW series interviewing each of the party's top candidates concludes by asking the candidates to pick one of their opponents to have as company on a deserted island. Gauland chose Sahra Wagenknecht, the top candidate for the Left party.