The Alternative for Germany (AfD) party has voted to allow Frauke Petry to run in the September election, despite internal strife. After building up the AfD, she has become a divisive figure in the nationalist party. 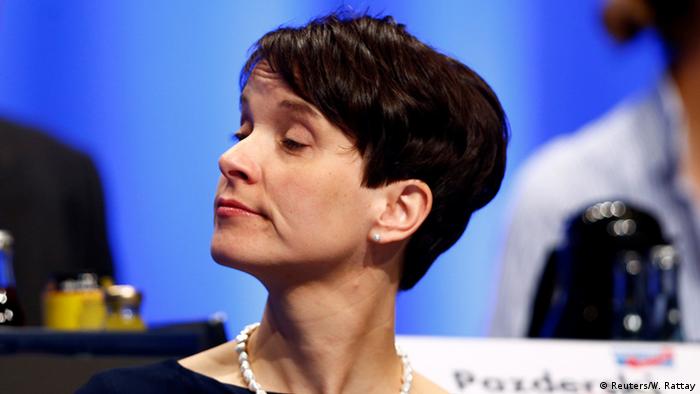 The Alternative for Germany's (AfD) party congress voted on Sunday in favor of allowing national spokeswoman and leader of its Saxony branch, Frauke Petry, to run as a candidate for the state of Saxony in this year's federal elections.

A proposal to stop her from running was put forward by a wing of the AfD who accuse her of splitting party ranks. Previously, Petry refused to support two disgraced party members over comments they made concerning the Holocaust at an event in January. Her detractors also claimed that the charges of perjury against her have damaged the party's reputation.

Read more: Ten things you need to know about the AfD

However, at Sunday's AfD party congress in the eastern German town of Dohna, 33 delegates for the nationalist party rejected the proposal to ban her from running, while 19 voted in favor.

Petry remains the top candidate on the AfD's list of candidates in Saxony for a seat in the Bundestag, giving her a very good chance of entering Germany's lower house following September's federal election.

Petry the target of anger as AfD support wanes

Petry, a trained chemist and businesswoman, entered politics to help AfD founder Bernd Lucke establish the party as a mainstream political force in 2013. Her ultra-nationalist, anti-Muslim and anti-immigration politics proved to be a boon for the AfD, with support reaching a record high of 15 percent last September.

However, the party has seen a recent slump in support in this year's state elections, thanks in no small part to a series of scandals that have plagued prominent members.

In January, AfD lawmaker Jens Maier  declared that Germany's "guilt cult" about the Holocaust was over during an event hosted by the AfD's youth organization in Dresden - the sort of statement generally designed to play well with Germany's neo-Nazis.

At the same conference, the AfD's leader in the eastern German state of Thuringia, Björn Höcke, called for an end to the culture of Shoah remembrance, attacking Germany's national Holocaust memorial and the country's devotion to teaching its citizens about Nazi genocide. Höcke said that German history was being made "appalling and laughable" and that "these stupid politics of coming to grips with the past cripple us - we need nothing other than a 180-degree reversal on the politics of remembrance."

Amid all the backlash directed at her from within the party, Petry announced in April that she would not be standing as the AfD's lead candidate in the federal elections. Instead, nationalist lawmaker Alexander Gauland and economist Alice Weidel will head the party into September's vote.