Activists or Kremlin agents - who protects Russian-speakers in the Baltics? | Europe | News and current affairs from around the continent | DW | 09.12.2015

Activists or Kremlin agents - who protects Russian-speakers in the Baltics?

Moscow has been financing Russian-language NGOs in the Baltic states for years. Security authorities there are suspicious of the organizations, but the NGOs deny there is any cause for concern. 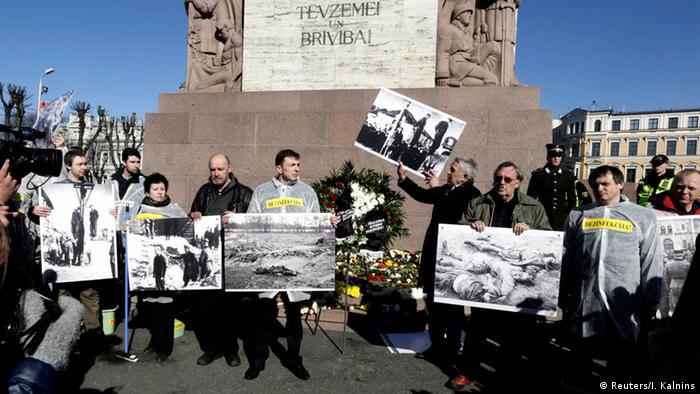 Gennadi Toprak is hoping to get some help from the Latvian Human Rights Committee so he can stay in his three-room apartment in the center of Riga. The 68-year-old said the apartment's owners want him to move out so they can sell the flat.

Having amassed some 38,000 euros in debt, he said he hopes the right committee, a non-government organization, will be able to help him stay in the apartment that was denationalized in the 1990s and given back to relatives of those who owned it before the war. 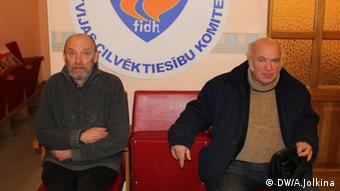 Founded in 1992, the Latvian Human Rights Committee is one of more than 40 Russian-financed NGOs in the Baltic states. Between 2012 and 2014, the committee received more than 200,000 euro from the "fund for the support and protection of rights of compatriots living abroad," which was created by the Russian Foreign Ministry in 2012. According to figures from the Baltic investigative journalism group Re:Baltica, the fund has provided at least 1.5 million euros to NGOs in the Baltic states over the last three years.

"Russian pensioners come, but also tenants in houses that have been denationalized. Most are Russian speaking," said Natalia Jolinka, the NGO's chairperson. Every day, four lawyers and several translators help people prepare lawsuits, some destined for the European Court of Human Rights.

In Estonia, the Legal Information Center for Human Rights in Tallinn deals with the problems of Russian-speaking citizens. This NGO is also financed by Russia. Currently they are trying to fight a new rule that would require taxi drivers to prove Estonian language proficiency before they could receive a license. 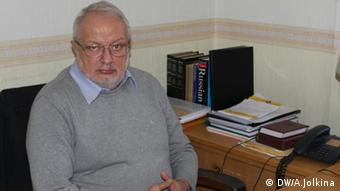 "That would be difficult for a taxi driver in the Estonian city of Narva, where more than 95 percent of inhabitants are Russian speaking," said the center's director, Alexei Semjonov.

NGOs: Human rights are being abused

The NGOs make a point of focusing their conferences and publications on the discrimination of people who speak Russian. In Estonia and Latvia, non-citizen status exists. Following independence in both countries, such status was given to persons from the former Soviet Union who settled in either country after 1940, as well as their descendants. Non-citizens are not allowed to vote or work as public servants. The Russian speaking NGOs see an abuse of human rights in this status.

Authorities have long had these NGOs in their sights. In its annual report, Latvian police stated that the Russia-backed organizations are tasked with the distribution of "biased and distorted information" on domestic procedures in Latvia. According to Estonian and Latvian authorities, the violation of the rights of Russian residents could serve as a justification for Russian aggression. In Lithuania, non-citizen status does not exist. Russian speaking NGOs there, concentrate on "fighting fascism."

National Socialism in the Baltics?

Baltic authorities said a revival of National Socialism is a myth cultivated by the NGOs, which accuse authorities of supporting fascism. A bone of contention is a march that takes place each year in Riga, honoring the memory of Latvian legionaries who served in the German Waffen-SS. The Latvian portion of the population sees the legionaries as freedom fighters against the Communist regime, Russian speaking residents see them as Nazi collaborators. 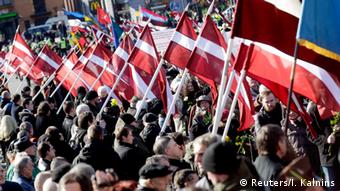 "I'm an anti-fascist - that is the position of all European counties," said Tatjana Zdanoka, founder of the Latvian Human Rights Committee.

The NGOs deny that their work is in any way controlled by Moscow, though several NGO activists appear regularly on Russian television. One of them is Alexander Gaponenko, from the Latvian Non-Citizens' Congress. Currently, proceedings are underway against him for incitement to ethnic hatred. On his Facebook page, he claimed that US tanks stationed in the country for joint military maneuvers were there to keep the Russian population in Latvia under control and to protect Nazi marches.

Gatis Pelnens, a Latvian expert on Russian foreign policy, called it ridiculous to talk of the revival of National Socialism in the Baltic states.

"There are neither ideological excesses nor a spread of National Socialist notions," Pelnens said, adding that Russians who regularly watch Russian TV often get the impression that their compatriots in the Baltics are being persecuted. "But in everyday life there are no such conflicts." 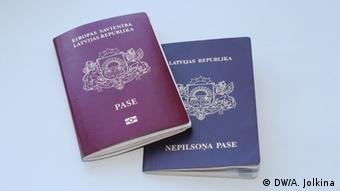 Experts also agreed that the influence of Russian-backed NGOs is limited, and that they pose no substantial threat.

"Today these organizations have to fight for their own survival," said Riina Kaljurand from the International Center for Defense and Security in Tallinn. "Therefore they tend to overdramatize events."

Ten eastern European governments have sent a letter of complaint to the European Commission that called for a summit-level debate on Russia's plans to extend its infrastructure for gas supplies to Germany. (27.11.2015)

To counter what many see as Moscow's destabilizing influence on its large minority, Estonia has launched its own Russian-language TV channel. Local news could be an antidote to propaganda, reports Isabelle de Pommereau. (01.10.2015)

Between 1940 and 1953, ten percent of the adult population in the three Baltic states - Estonia, Latvia and Lithuania - was deported or sent to labour camps. In Estonia, this collective trauma can be sensed in people's reactions to Russia's war with Ukraine.