Accused gunman admits to shooting at Frankfurt Airport | Germany | News and in-depth reporting from Berlin and beyond | DW | 31.08.2011

A Kosovan man on trial for shooting dead two US airmen at Frankfurt Airport has apologized for his actions. The 21-year-old confessed to the shooting and said he was influenced by radical Islamist propaganda. 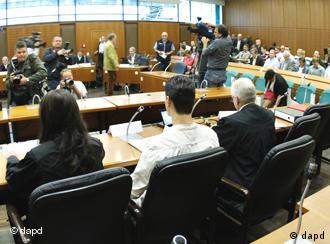 Arid U. faces a possible life sentence for the attack

A 21-year-old Kosovo Albanian man confessed in court on Wednesday for killing two US airmen at Frankfurt Airport in March.

German federal prosecutors have charged Arid U. with two counts of murder and three counts of attempted murder. He faces a possible life sentence.

At the opening of his trial in Frankfurt, Arid U. read out a statement in which he said he wanted "to apologize to everyone."

He confessed to the shooting and told the court: "Today I can't understand myself how I could have acted in this way."

The attack on March 2 was the first successful attack by a suspected Islamic extremist on German soil. It sparked fears about the danger of "lone wolf" terrorism - carried out by a self-radicalized individual, unaffiliated with any organization and previously unknown to the authorities. 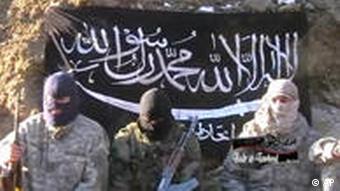 Prosecutors say Arid U. was radicalized by propaganda he saw on the Internet trying to incite jihad, or holy war. They believe he acted alone and did not belong to a terrorist network.

His lawyer told the Associated Press that Arid U. had watched a video the night before the attack purporting to show American soldiers raping a teenage Muslim girl. It turned out to be a scene from the 2007 anti-war movie "Redacted," which had been taken out of context.

On Wednesday Arid U. said he was influenced by "lies" and "propaganda" and "no one should think of imitating me."

"I thought [that] what I saw in that video these people would do in Afghanistan," he told the court.

Souad Mekhennet, security expert for Germany's ZDF television, has been following the trial and said Arid U. only became radicalized because he had done badly at school and was "deeply depressed."

"The only thing that was helping him make sense of his life was religion, so he became more interested in religion and tried to find answers on the Internet," she told Deutsche Welle. 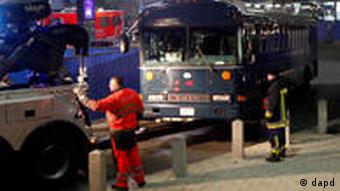 The driver of the US Air Force bus was killed, along with another airman

It was through this general curiosity that Mekhennet claims he was then linked to radical Islamist sites. She said many of these sites popularize radical ideas through youth culture, song and video.

"Sometimes people don't realize it's propaganda they're listening to, and that's what makes it so dangerous," she said.

More and more propaganda videos are coming out of Waziristan, including those made by the German-speaking Chouka brothers. "They are explaining - in fluent German - to a young audience why it's important to fight jihad," said Mekhennet.

"But there are an increasing number of videos coming out of Germany, and I know German and Austrian security officials are very worried about that," she explained.

Arid U. was working on a short-term contract at the airport's international postal center. He confessed to firing on the airmen at point-blank range using a 9 mm pistol.

According to the indictment, he allegedly followed two men in uniform to a US Air Force bus, where 16 unarmed servicemen, who had just arrived from London, were about to travel by road to an airbase. He is alleged to have approached one of the men for a cigarette, before pulling out his weapon and shooting the 25-year-old airman in the back of the head.

Arid U. then allegedly also shot and killed the 21-year-old driver, before wounding two others. His pistol jammed as he aimed at a fifth man. Police then overpowered him as he tried to flee.

No pleas are entered in the German system and Arid U. confessed to the killings after the indictment was read, telling the court "what I did was wrong but I cannot undo what I did."

The trial is expected to last until early next year.

Editor's note: Deutsche Welle is bound to German law and the German press code, which stresses the importance of protecting the privacy of suspected criminals or victims and obliges us to refrain from revealing full names in such cases.

Germany has brought charges against the man accused of murdering two US servicemen en route to Afghanistan in broad daylight at Frankfurt Airport in March. Prosecutors have declined to charge him with terrorism. (07.07.2011)

German federal prosecutors have begun investigating the attack on US soldiers at Frankfurt Airport for evidence of ties to Islamic terrorism. The German media have reported mounting evidence of a terrorist motivation. (03.03.2011)

Two US servicemen have been killed and two more wounded at Frankfurt Airport. A young man, who has since been arrested, opened fire on their US military bus outside Germany's busiest hub. (02.03.2011)

Islamist on trial for murdering US airmen