Germany has brought charges against the man accused of murdering two US servicemen en route to Afghanistan in broad daylight at Frankfurt Airport in March. Prosecutors have declined to charge him with terrorism. 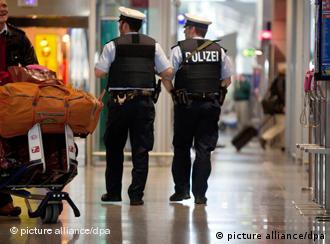 Arid U. is accused of killing two men and injuring two others

German authorities have indicted a man accused of shooting two US airmen at Frankfurt International Airport in March. Arid U., who is of Kosovar background, was accused of killing US servicemen Nicholas Alden and Zachary Cuddeback.

The 21-year old was also charged with three counts of attempted murder, for trying to kill three others before his gun jammed.

Prosecutors declined to charge Arid U. with terrorism, saying he was a loner with no connections to terrorist groups.

The man is suspected to have carried out the attacks on the soldiers to avenge US actions in Afghanistan.

Federal prosecutor Rainer Griesbaum told reporters the suspect shot the first airman in the back of the head at point-blank range after asking him for a cigarette outside the bus.

He then entered the bus, yelling "Allahu Akhbar" ("God is Great") and shot the driver dead. He then shot two others before putting the gun to the head of another serviceman and pulling the trigger twice, according to Griesbaum. However, the gun jammed and the man subsequently fled into the terminal. He was chased by the man he had attempted to kill, who apprehended shortly thereafter.

Prosecutors in Karlsruhe said Arid U., a Muslim, was radicalized by reading Islamist propaganda on the Internet. He had recently finished school and was living with his parents.

A US court has charged a Kosovo man with murder and attempted murder after he allegedly opened fire on a bus of US airman at Frankfurt airport in March. The 21-year-old is accused of killing two and injuring two others. (22.06.2011)

German newspaper Die Welt has reported that CCTV cameras at Frankfurt Airport were allegedly out of action when a young Islamist shot four US airmen on a terminal forecourt. (06.03.2011)

Prosecutors believe the man charged with killing two US airmen and severely wounding two more at Frankfurt Airport was acting alone. An online video apparently motivated him to commit the crime. (04.03.2011)