A New Thaw Ahead for German-American Relations | Germany | News and in-depth reporting from Berlin and beyond | DW | 11.01.2006

A New Thaw Ahead for German-American Relations

Angela Merkel heads to Washington Thursday for her first meeting with President George Bush since she became chancellor. Many hope US-German relations will get a strong boost. 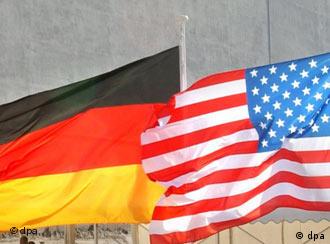 Will Berlin and Washington stand together strong as partners?

After the iciness that characterized American relations under her predecessor, Gerhard Schröder, following Germany's resistance to the war in Iraq, Merkel is expected to once again warm up the transatlantic relationship by reducing tensions between Berlin and Washington.

But the expectations are high -- unrealistically high, some say -- and Merkel's recent criticism of the US prison camp in Guantanamo Bay and differences of opinion on the methods the United States employs in the fight against terror could serve as stumbling blocks on the road to friendlier ties.

DW-WORLD takes a look at how German-American relations have begun to improve and some of the critical issues of Merkel's as yet brief administration.

German Chancellor Angela Merkel said she aims to bolster ties with the United States and smaller EU states. The statements came as her foreign minister began a trip to the US. (Nov. 28, 2005)

A new survey shows Americans still consider Germany to be a key ally, although the Iraq war has taken its toll on relations. (Dec. 8, 2005)

Germany's new Defense Minister Franz-Josef Jung has made his first official visit to the US. He met his US counterpart, Donald Rumsfeld and Secretary of State Condoleeza Rice for "very positive" talks. (Dec. 20, 2005)

Newspapers in Europe and the US were full of praise for Angela Merkel following her first visit to Washington since becoming German chancellor and her candid style during wide-ranging talks with President Bush. (Jan. 16, 2006)

German Chancellor Angela Merkel emerged from talks with US President George W. Bush in Washington Friday to say that Germany would not be intimidated by Iran but both countries would strive for a diplomatic solution. (Jan. 13, 2006)

German-American relations have seldom experienced the strains that developed during Gerhard Schröder's time as chancellor. The icy relations have thawed somewhat but differences of opinion remain. (Aug. 13, 2005)