Newspapers in Europe and the US were full of praise for Angela Merkel following her first visit to Washington since becoming German chancellor and her candid style during wide-ranging talks with President Bush. 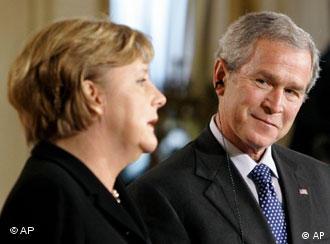 Merkel got Bush's undivided attention during her trip

"A new phase in European-American relations was ushered in with the meeting in the White House between the chancellor and US President George W. Bush. But Berlin is not about to give up its recent emancipation and its right to say "no" when it wants to. The grave crisis with Iran will be the first test, both have said. It is an opportunity to put this rapprochement and new willingness to cooperate to the test."

"If Merkel can build bridges within the EU and sort out the smoldering conflict over EU finances, then she can hopefully also building a transatlantic bridge between the US and a critical Europe. That helps international cooperation in many ways, not only in the fight against terrorism."

The New York Times had praise for "a new friend with good advice":

"Mrs. Merkel could be what Washington needs, a European friend with credibility and clout on both sides of the divide back home. Alas, Mrs. Merkel will most likely not persuade Mr. Bush to close down Guantanamo, but if she can convince him that her advice comes from a friend, the visit will be useful."

The Baseler Zeitung from Switzerland said that the new transatlantic relationship is still open:

"Exactly what Washington's new relationship to Berlin will look like is still rather vague. The line that the Merkel government won't cross regarding Iraq -- no German soldiers -- has been accepted. On the question of Iran, it is common knowledge that it could get awkward for any chancellor if the US decides to pursue the military option. The German mission in Afghanistan and in the Balkans has been acknowledged … the most visible sign of the new relationship could be if during the next crisis, Bush picks up the phone and calls Berlin."

"To the amazement of her critics, the chancellor had sharp words of criticism for the Bush's administration's sloppy way of dealing with human rights and international law until now. But despite all the differences of opinion, you can't afford to overlook the core of the partnership: In the war against global terrorist networks and aggressive despots, both democracies, the US and Germany, are on the same side."

Germany's left-leaning Berlin-based daily TAZ however was of the opinion that the talks between Merkel and Bush didn't go beyond the usual niceties:

"Even before Angela Merkel's visit in Washington, the foreign policy goals were in place: both sides had a great interest in creating a friendly atmosphere for the talks. Certain subjects, especially Iran's nuclear program, could not be delayed and all those involved agreed that a common approach was needed. It was in front of this background that the friendly television pictures were produced, along with statements that didn't say much of anything."