Opinion: Germany′s Steinmeier Makes His Mark in Washington | Germany | News and in-depth reporting from Berlin and beyond | DW | 30.11.2005 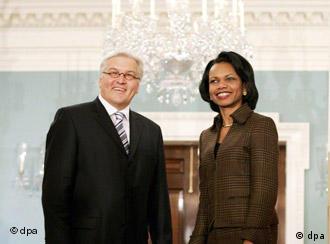 Steinmeier's first day in Washington as the fresh face of Germany was not the debut he might have wished for. News of the kidnapped German archaeologist in Iraq meant he spent much of the day locked in telephone conferences with a diplomatic crisis management team back in Berlin. In addition, the Germans found themselves relying on the US for logistical support in the very place where Berlin had refused to back Washington in its hour of need.

And that was not all. The day was accompanied by continuing allegations of secret CIA prisoner transports through Europe with stopovers at German airports. But even against this harsh backdrop Steinmeier was able to master the situation with professionalism and diplomatic calm. The Americans, whose knowledge and contacts in Iraq could be of live-saving importance, immediately agreed to help with intelligence on the kidnapping.

That was just the first sign of a change in relations between the two countries. Steinmeier and his US counterpart Condoleezza Rice proved in the way they addressed the allegations against the CIA that Berlin and Washington are now back on a strong footing. As the foreign minister candidly raised the issue, Rice assured him and the EU of swift clarification.

Exactly what she will say remains to be seen, but what is clear is that not so very long ago, Washington would have been unlikely to tolerate Germany poking its nose in where it was not welcome. But now the White House seems to again take European worries over human rights issues and international treaties seriously.

The show of good will on both sides is not merely a coincidence. Increasing pressure from the American public to withdraw US troops from Iraq is forcing President George Bush's government out of its bubble. Washington needs NATO in order to relieve the burden on its Iraq activities, and Germany knows there is no need to change tack on its own refusal to send troops to Iraq. Supporting the training of Iraqi troops is an important task if the Iraqis are to be maneuvered into a position from which they can control their own troops.

Whether Frank-Walter Steinmeier will follow the path of skepticism towards the US so well-worn by Gerhard Schröder or adopt the softer line touted by Angela Merkel is an idle question. The situation on the world stage is such that the two sides will have to work together, and in one short visit, Steinmeier has already proved that a sensible dialogue in a businesslike and friendly tone is more helpful than the nurturing of animosity.

US Acknowledges Need to Respond to Secret Prison Reports

The United States acknowledged Tuesday European concerns over reports of CIA secret prisons and transport flights for terror suspects and said mounting questions "need to be responded to." (Nov. 29, 2005)

The kidnapping of a German aid worker in Iraq proves that Germany's stark opposition to the US-led war will not be enough to protect the country from terrorism, according to Interior Minister Wolfgang Schäuble. (Nov. 30, 2005)