The Rocky German-American Landscape | News and current affairs from Germany and around the world | DW | 13.08.2005

German-American relations have seldom experienced the strains that have developed during Gerhard Schröder's time as chancellor. The icy relations have thawed somewhat but differences of opinion remain. 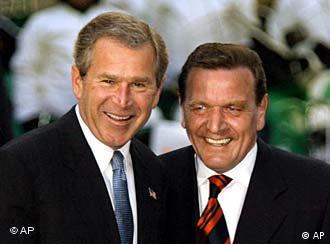 Bush and Schröder can smile together -- only in front of cameras

The first storm clouds appeared on the German-American horizon in May 2002. During George W. Bush's visit to Germany, the US president was confronted with large crowds protesters who roundly jeered him. It was a very different kind of reception than the ones his predecessors received. George W. Bush did express his appreciation for German support after the September 11, 2001 attacks on New York and Washington, but that did little to quiet the angry voices that rose up in the street.

Since 9/11, Bush had turned up the pressure on Baghdad, calling the Middle Eastern state under Saddam Hussein a threat to the free world.

"I know that some people act as if the danger is not real," Bush said in Berlin. "I am saying that it is very real and a danger for everyone who loves freedom."

Harsh words from both sides 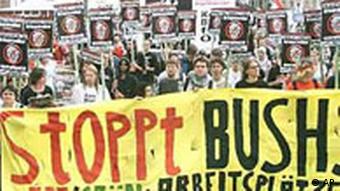 The timing of the US threats toward Iraq couldn't have come at a more opportune time for Schröder. He made it a major issue in the general elections in September 2002, saying that Germany would not participate in an "adventure" in Iraq. In addition, the tone towards the Germany's once-close ally got increasingly harsher. Justice Minister Hertha Däubler-Gmelin's even compared Bush to Adolf Hitler, and promptly lost her job.

The reaction from the White House was one of outrage and even unbiased observers said the comment was uncalled for.

"That was a very dumb comment. A grotesque exaggeration. The angry reaction from the White House is, I think, in line. I think this egregious comment will harm relations because Bush takes something like that personally," said the American professor for German history, Gerald Livingstone.

Despite Däubler-Gmelin's resignation from the Schröder administration, the reply from Washington to the comparison came without delay from US Secretary of Defense Donald Rumsfeld. While talking about opposition to a war, Rumsfeld mentioned Germany in the same breath as Cuba and Libya. France was also not spared his vitriol.

"When you think of Europe, you think of Germany and France. I don't. I think that's Old Europe," the hawkish defense secretary said.

A time for war, a time for peace

With Rumsfeld's comment, the apex of the verbal volleys across the Atlantic had been reached. With a firm hand, German Foreign Minister Joschka Fischer attempted to bring the matter to an end, telling all the parties involved to calm down.

The jabbing may have stopped, but the German government's position did not change. Schröder and Fischer refused to support the US in waging a war against Saddam Hussein.

The hostility between the Bush and Schröder administrations has been more or less laid to rest by finding common ground, for example, Germany's presence in Afghanistan. Even Rumsfeld has rested his sharp tongue, saying relations between the two are not poisonous.

The beginning of George W. Bush's second term was marked by a conscious effort by new Secretary of State Condoleezza Rice to improve the strained relations between the US and those Europeans countries opposed to the Iraq war. 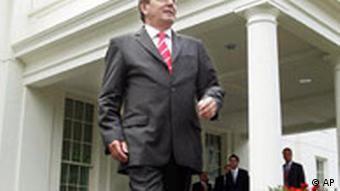 One area where Germany and the US still don't see eye to eye, however, is the environment. America's refusal to sign the Kyoto Protocol to reduce greenhouse gas emissions rubbed many Germans, and particularly those in the Green party, the wrong way.

The newest disagreement has been Germany's attempt to win a permanent seat on the UN Security Council. Fischer, despite his efforts, was unable to win Washington's backing for the measure.

Although the relationship between Chancellor Schröder and President Bush has defrosted somewhat, during a visit to Washington in June, Schröder did not come away with the impression that Bush would like to see him have a third term as chancellor.

"He did wish me luck in life," said Schröder later.

U.S. Secretary of State Colin Powell will arrive Friday in Berlin in what many are seeing as a chance to repair damaged relations between the two countries. A chronology on how it came to be that way. (May 15, 2003)

Schröder in Washington to Meet Bush

On Monday, Chancellor Gerhard Schröder is meeting US President George Bush in the White House for talks on the situation in Iraq and Afghanistan, the developments in the Middle East and the EU. (June 27, 2005)