Rice Calls for ″New Chapter″ in Transatlantic Ties | News and current affairs from Germany and around the world | DW | 08.02.2005

Condoleezza Rice used a speech in Paris on Tuesday to begin mending bridges with the French government and to urge Europe to "stand ready" to work with the US. 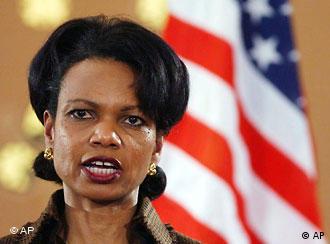 The new US Secretary of State has adopted a conciliatory tone

The new US Secretary of State arrived in Paris on Tuesday and urged Europe to "stand ready to work with America" in a speech seen as the key moment of an eight-nation tour which was to include talks with French President Jacques Chirac.

Rice's choice of the French capital for her address was carefully chosen. Chirac and his government led European opposition to the US invasion of Iraq in 2003 and Paris-Washington ties remain frosty some two years later.

In remarks prepared for delivery at the Sciences
Politiques University in Paris before her meeting with Chirac, Rice -- one of President George W. Bush's closest advisors -- called for "a new chapter" in the transatlantic relationship. 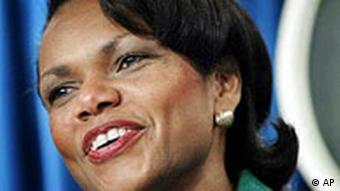 America, she said, had everything to gain from a stronger Europe as a partner in building a safer and a better world where both could "work for the cause of freedom." History, Rice added, "will surely judge us not by our old disagreements, but by our new achievements."

France was the sixth stop of a tour that has already taken her to Britain, Germany, Poland, Turkey, Israel and the Palestinian Territories, and Italy. She was to wrap up the trip on Thursday after stopping in Belgium. The whirlwind itinerary was largely to set the scene for a February 21-24 visit by US President Bush. 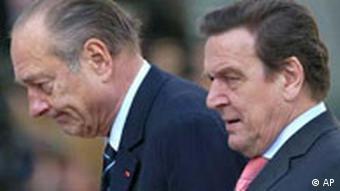 The Paris leg was considered the most important for Rice, who in 2003 famously said that Washington should "punish France, ignore Germany and forgive Russia" for opposing Bush's decision to invade Iraq to look for supposed weapons of mass destruction.

Her speech on Tuesday contained less inflammatory language and suggested that Washington was now serious about smoothing over the dispute and restoring US-European cooperation to its former strength.

Rice also spoke warmly of the relationship between France and the United States, saying that the two countries had a shared past and, more importantly, a shared future. She added that both countries were built on the idea of liberty and had worked together with other nations within Europe in the spread of freedom.

Chirac, too, has been making conciliatory noises of late. The French leader is notably to hold private talks with Bush the night the US leader arrives in Brussels on February 21.

Ahead of Rice's arrival in Paris from Rome, French judicial sources told AFP that the United States had agreed to release the remaining three French prisoners being held in its military base in Guantanamo, Cuba.

The US decision to release the three French prisoners from Guantanamo was also a move timed to placate France, although it may have also been prompted by a US judge's ruling last month that military trials of prisoners at the base violated the US constitution.

Problems remain between France, US 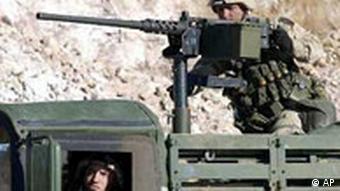 Nevertheless, differences remain. The United States has been unable to convince France to become engaged in post-conflict Iraq beyond a promise to train Iraqi security forces outside the violence-wracked country.

It has also raised French hackles for refusing to sign on to the International Criminal Court, for refusing to ratify the Kyoto accord and for not actively supporting efforts by France, Britain and Germany to reign in Iran's nuclear program through diplomatic means.

Another test of US-French ties will come later this week, when US Defence Secretary Donald Rumsfeld and his French counterpart, Michele Alliot-Marie, attend an informal NATO meeting in the French Riviera city of Nice to discuss Iraq and other issues.

Following a meeting with Britian's Tony Blair on Friday, US Secretary of State Condoleezza Rice said an attack on Iran was "not on the agenda." In Berlin, she said Iran should live up to its international obligations. (Feb. 4, 2005)

In Paris, the heart of opposition against the Iraq war, Condoleezza Rice plans to give her first speech on US-European relations since becoming the United States' top diplomat. (Feb. 8, 2005)