20 years after the fall of the Berlin Wall not much has survived in Eastern Germany to remind people of decades of Communist rule. An aspect of public life that is still distinctly different in Eastern Germany though, is the seemingly omnipresence of Vietnamese people there. Once invited in their thousands by the Communist rulers to shore up the country’s flagging economy they were forced to start new lives in the shadow of German unification. And they have survived through hard work and perseverance. 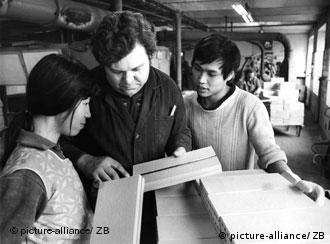 In the sprawling halls of Berlin’s Pacific Centre wholesale outlet, 38-year-old Trinh Thi Mui is very much in her element. As she rattles through impressive numbers about her aquisition such as the 17,000 square meters shopping space, a four-storey office building and almost 50 trading companies from across Asia represented there – the Vietnamese businesswoman seems to grow in stature. Dressed in an elegant business outfit she lectures stunned visitors about labor costs in Vietnam and why textile manufacturers there know better about Germans‘ clothing sizes and favourite colours than their rivals from China do.

Yet, some 20 years ago, Ms Mui was in a different line of work. She used to hunch over electric motors at an assembly line in an East Berlin company, one of about 60,000 Vietnamese contract workers hired by communist East Germany to meet a growing demand for cheap labour in the country’s antiquated industries.

"The wages were rather low in East Germany," she recalls. "But we needed the money to help our families in Vietnam. Nevertheless we had a lot of fun at the weekends which used to be free. We also made friends with many of our German colleagues who were dancing and eating with us at parties organised by the company."

When communism collapsed and Germany was unified, thousands of companies folded and the foreign workers were the first to lose their jobs. Some 30,000 Vietnamese were sent home straight away. Those whose contracts had not yet expired were allowed to stay on. Like Trinh Thi Mui they were trying to carve out a living in the shadows of all the Western abundance that began to flow into East Germany.

"After unification my husband and I set up a small textile business", Mui says. "Initially we bought our wares from Poland, India and Pakistan. Later we started doing business with Vietnam where textiles are cheaper and the industry was growing. After spending 15 years in a bus selling our wares at markets across Germany, we entered the wholesale business and opened this centre."

Many Germans, though, still associate the Vietnamese with possessing a rather shadowy type of character – the type that springs to mind is the sulking and suspicious-looking cigarette pedlar hawking his illegally imported wares outside supermarkets.

Many of them used to toil away in the communist factories of Eastern Europe and the former Soviet Union. When the Iron Curtain fell they sought asylum in a unified Germany. Vietnam refused to take them back, so an estimated 10,000 were left stranded here and were merely granted an exceptional leave to remain. Some of them ended up in the services of the Vietnamese cigarette mafia – an organisation whose gang warfare in the 1990s has left a bitter aftertaste for many Germans.

Hai Bluhm, a social worker at the Song Hong Vietnam contract workers‘ association in Potsdam is keen to improve her people’s image. The 40-year-old earned an economics degree in East Germany and was then made redundant soon after unification. Today she gives lectures about German business and trade laws, and advises her fellow nationals on Germany’s intricate immigration laws. "If you can prove that you're making a living", she says, "everything is fine in this country.

"I’ve learned a lot of good things from the Germans. Punctuality is one of these, and that the human being should be at the centre of everything. The individual human being is important here, unlike in Vietnam where the individual does not always matter."

These days former Vietnamese contract workers successfully run textile businesses and Asian Food restaurants - and lately nail studios have become all the rage within the community. Small wonder then that a recent immigration study has found the Vietnamese to be one of the best-integrated group of immigrants in Germany. And Franziska Woellert, co author of the study, says the second generation of Vietnamese in Germany want to aim even higher than their parents.

"They have a high level of education and perform well in the labour market. There are engineers, and many are self-employed. Education is something that Vietnamese children know they have to be successful at."

Some 20 years after they had fallen on hard times, most of the former contract workers from Vietnam appear to have left the troubled times of communist East Germany behind them and have moved on to a more prosperous future.