#MeToo is currently one of the most important issues debated worldwide, an outcry against harassment by men in power. A look back at the events that marked the last 100 days. 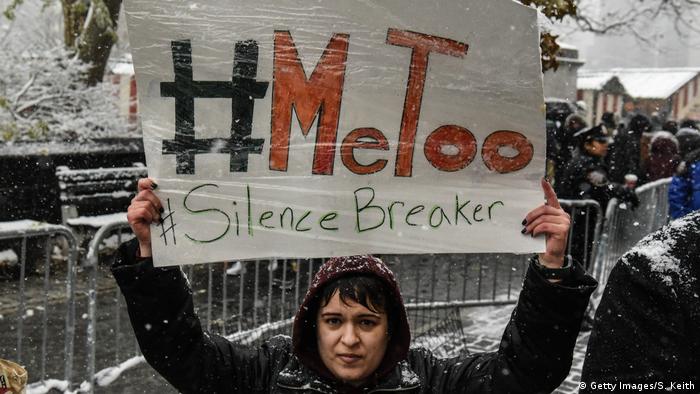 And tens of thousands took up her call. The occasion for the hashtag #MeToo was the earth-shaking news that had emerged out of Hollywood just a few days earlier when Milano's colleagues, many of them quite famous, told their stories. Stories about things that had taken place behind the scenes over years, decades — namely, that Hollywood producer Harvey Weinstein had sexually abused and coerced actresses. Many of their careers were only made possible by being in the good graces of the powerful producer.

Everyone in the industry seemed to know about what was going on, but it was deliberately overlooked. Just like actor Kevin Spacey's sexual assaults.

Weinstein has since been banned from Hollywood. Spacey's career is over. His successful Netflix series "House of Cards" has been shelved. 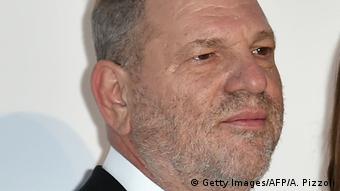 It all started with allegations against Hollywood producer Weinstein

Far beyond Hollywood's glimmering lights, all over the world, women who had experienced similar violence made their voices heard under #MeToo. Men as well. The hashtag was used some 200,000 times on Twitter in just the first day.

By day two, that number had risen to more than half a million. Women and men briefly described what had happened to them.

Milano received answers to her post that were shocking, even despite — or perhaps because of — their brevity: "I was nine…" Women wrote about grandfathers, stepfathers, bosses, and neighbors. And pain — pain that would not go away even as the years went by.

The hashtag #MeToo started trending on Twitter in more than 85 countries, spurring offshoots in other languages.

Victims have spoken out from the music industry, business and politics. Names such as George W. Bush, Bill Clinton and Donald Trump were heard, but high-ranking politicians in other countries also were accused. 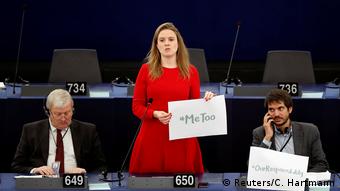 The European Parliament member from Germany and Green Party politician Terry Reintke had already described in September how she had been a victim of a sexual attack in the German city of Duisburg.

In the aftermath of the #MeToo debate, the EU Parliament decided to deal with similar occurrences within its walls. The legislature passed a resolution: cases of harassment and assault were to be investigated, cleared up and sanctioned.

British Defense Minister Michael Fallon stepped down. According to a report in the British newspaper The Guardian, Fallon had inappropriately touched journalist Julia Hartley-Brewer multiple times on the knee during a dinner back in 2002, until she threatened to slap him. 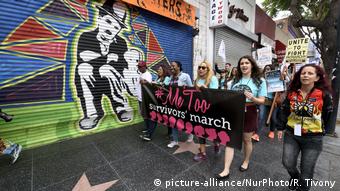 A ralley in Los Angeles, inspired by the #MeToo movement

The article's publication set a chain of events in motion that not even the journalist in question could stop. Hartley-Brewer herself found it "bizarre" that something which took place 15 years earlier could suddenly land on the front page. She also didn't see herself as a victim of harassment: "My knees remained intact."

Hundreds of women, men and children came together in Hollywood to attend a "Me Too Survivors" march. They paraded down Hollywood Boulevard with signs and banners in protest against sexual abuse and rape. Their path also leads them over the Walk of Fame, the sidewalk filled with the stars of legendary Hollywood figures, some of whom stand accused. 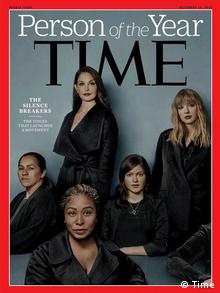 "The Silence Breakers" were Time magazine's Person of the Year

German-speaking Switzerland names #MeToo as its word of the year. The jury's rationale: "The word affected 2017 like no other. It denounced. It brought to light what had long been repressed. It directly linked social media and public discourse. That is how, after just a few days in the Hollywood film industry, it came into daily life, here and now — also in Switzerland."

Time magazine announced its annual Person of the Year. Following Angela Merkel (2015) and Donald Trump (2016), it chose "The Silence Breakers," people who had spoken out as part of the #MeToo movement.

The accompanying article included the original founder of the term "MeToo," Tarana Burke, as well as stars such as Taylor Swift and Ashley Judd. The magazine underlined that its yearly selection is about honoring people who, in whatever form, have impacted social debates. This year, the magazine said, these people were the innumerable "Silence Breakers."

By mid-December, the #MeToo debate had dominated German talk shows for weeks. 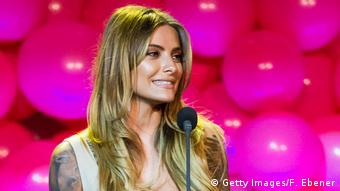 On one show, Sophia Thomalla, a German model and actress, criticized the #MeToo movement, calling the debate "an insult to actual rape victims." People violently disagreed, while others agreed — mirroring the debate in Germany.

Under #MeToo, women describe terrible cases of abuse as well as wolf whistles and leering. However, the type of violation isn't what's at the heart of the sexism debate, it's the fact that men take the liberty of all sorts of transgressions. 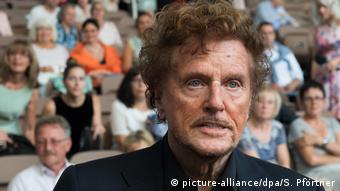 The first specific allegations in the German film industry were made. Actresses and former co-workers accused director Dieter Wedel  of violent and sexual harassment in the 1990s.

Back then, Wedel was in charge of highly successful German TV films and series — and known for his iron-fisted approach on set. Several actresses spoke of harassment, even rape, in hotel rooms. Wedel denied the allegations and announced he would take legal action. 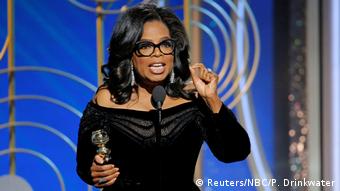 Oprah Winfrey held an inspiring speech at the Globes

At the Golden Globes Awards ceremony in Los Angeles, most guests show up dressed in black out of solidarity with the #MeToo movement and the victims of sexual violence. Oprah Winfrey made a rousing speech. "For too long women have not been heard or believed if they dared to speak their truth to the power of those men. But their time is up," the talk show host said. Nobody, she added, should ever have to say "me too" again. The audience and millions of TV viewers were so enthralled by Winfrey's words that many would like to see her as a candidate for the next US presidential election. 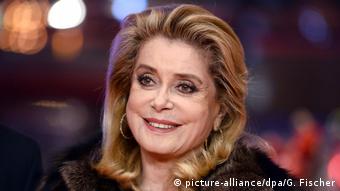 French film star Catherine Deneuve and 100 other French celebrity women published an open letter in newspaper Le Monde, harshly criticizing the "denunciation campaign" against men. "Rape is a crime, but insistent or clumsy flirting is not an offense," the women wrote.

The #MeToo debate started 100 days ago, and it is long from over.

Woody Allen's estranged, adopted daughter Dylan Farrow has revived claims that he sexually assaulted her as a seven-year-old girl. The prolific filmmaker, now 82, has disclaimed the graphic accusations as "cynical." (19.01.2018)

Charles Dutoit has withdrawn his services for upcoming symphonic concerts after four women accused him of assault, media say. He is the second major international conductor to face such accusations in recent weeks. (22.12.2017)