Oprah for president? How the idea anchored within a day | Culture | Arts, music and lifestyle reporting from Germany | DW | 09.01.2018

It was jokingly suggested during Golden Globes night, then came an electrifying speech by the talk show queen: Within 24 hours, "Oprah Winfrey for president" turned into an actual possibility. Here's how.

In a way, "Saturday Night Live" host Seth Meyers pushed Donald Trump to run for president. To compensate, he might have launched Oprah Winfrey's candidacy as well.

Hired as a comedian for the White House Correspondents Dinner in 2011, Meyers slammed billionaire reality TV star Trump, also present at the event, jokingly implying that he was as qualified to become president as an old rusty bird cage. The merciless jokes at Trump's expense allegedly contributed to his decision to run for president. 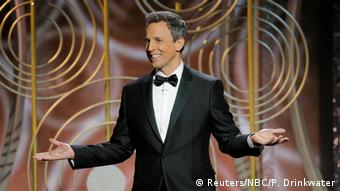 Seth Meyers, the fortune teller of US presidencies?

Hosting the Golden Globes Awards 2018 ceremony on Sunday, Meyers referred to his prescient humor: "Some have said that night convinced him to run. So, if that's true, I just want to say: Oprah, you will never be president! You do not have what it takes. And Hanks! Where's Hanks? You will never be vice president. You are too mean and unrelatable. Now we just wait and see."

That night, receiving the Cecil B. DeMille Award honorary Golden Globe Award for her lifetime achievement, Oprah Winfrey's powerful speech demonstrated that she had the eloquence it takes to move the public.

Even Ivanka Trump was touched by Oprah's "empowering & inspiring speech."

A new day on the horizon

In any case, Oprah Winfrey's Golden Globes call, "a new day is on the horizon," was readily turned into a campaign slogan.

A tweet posted by the NBC network posted a picture of Oprah, stating, "Nothing but respect for OUR future president." The tweet was a reference to a meme that developed following Twitter user Makenna's cleaning of Donald Trump's star:

Not everyone found it funny; NBC deleted the controversial tweet after it had already been retweeted and liked by thousands.

Meryl Streep also contributed to the hype by telling the Washington Post, "She launched a rocket tonight. I want her to run for president. I don't think she had any intention [of declaring]. But now she doesn't have a choice."

Other celebrities, including pop superstar Lady Gaga, contributed to the social media wave.

Fame, the only way to a US presidency?

If some political observers smirk at the prospect that yet another TV megastar is suddenly seen as the only hope for the US, Winfrey's name is meanwhile spreading in serious political circles as well.

Brad Anderson, the Iowa state director for President Barack Obama's re-election, tweeted that Oprah should give him a call:

Pfeiffer added in another tweet that "he didn't know if Oprah would be a good President, but she would definitely be a better President than Trump."

Although Donald Trump and Oprah Winfrey share TV stardom, unlike Trump, hers is an actual rags-to-riches story. As a self-made billionaire, Oprah has always used her own story of overcoming abuse to inspire others to seek a better life. As such, she is perceived as an upgrade to the current president, despite her lack of experience in politics.

Ironically, in 1999, Donald Trump had suggested himself that he would see Oprah as his first choice for vice president if he were to run for president: "Americans respect and admire Oprah for her intelligence and caring. She has provided inspiration for millions of women to improve their lives, go back to school, learn to read, and take responsibility for themselves," Trump wrote in his book, as pointed out CNN reporter Andrew Kaczynski.

Although Oprah had always previously denied that a presidential run was an option, "two close friends" told CNN that she was "actively thinking" about it now.

Many women arrived on the red carpet dressed in black to show solidarity with victims of sexual abuse and harassment. In the awards, German director Fatih Akin's "In the Fade" was named best foreign language film. (08.01.2018)

Merkel named most powerful woman in the world

As the world warms to the idea that entertainment billionaire Oprah Winfrey could become a presidential candidate in 2020, here's a look back at her rags-to-riches story. (09.01.2018)

An American drama on rape and murder, a story about a woman and a mysterious creature, but also a German crime film dealing with revenge were honored at the 75th Golden Globe Awards ceremony. (08.01.2018)

She won over Hollywood and Broadway, and continues to release hit records. But even at 80, Barbra Streisand still sees herself as the girl next door.

In the weeks since actor Alec Baldwin accidentally shot cinematographer Halyna Hutchins on set, conjecture around the ongoing investigation has snowballed.