After China′s import ban, where to with the world′s waste? | Environment | All topics from climate change to conservation | DW | 05.04.2019 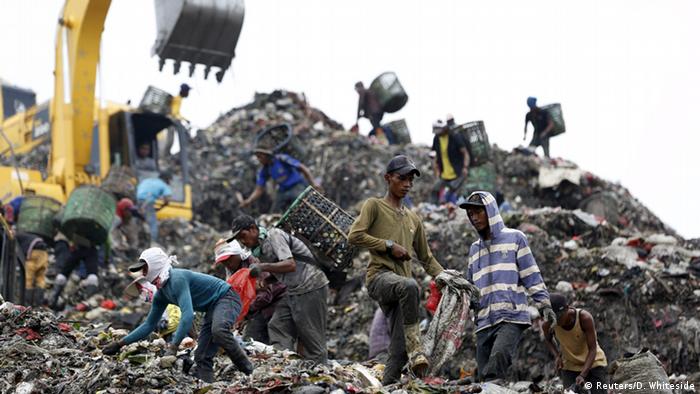 The toxic fumes wafting across the small village of Jenjarom, just outside the Malaysian capital of Kuala Lumpur, are especially bad at night, when the nearby recycling plants begin to melt plastic waste.

"It stinks, and the fumes hurts our lungs," says Lay Peng, a 47-year-old who lives in a nearby housing estate. "No one can run away from the toxic fumes, that's the worst part."

Lay Peng says hundreds of tons of plastic waste are regularly incinerated in an illegal operation just a kilometer (around half a mile) from her home. Her three children, she says, have all developed asthma, and her husband has been hospitalized with lung cancer.

For the last year and a half, Jenjarom has been importing increasing amounts of plastic waste to be recycled and incinerated, putting the village in the middle of a worldwide garbage crisis.

It all started in July 2017, at the meeting of the World Trade Organization in Geneva, when Beijing announced it would be reducing its import of global plastic and paper waste.

Until then, China had been taking in up to 56 percent of the world's plastic garbage to recycle, along with a significant portion of its paper refuse — 60 percent from the United States, and more than 70 percent from Europe. It justified its decision to stop the imports on environmental grounds, and said it also wanted to "protect" the health of its citizens.

The decision brought the global recycling system to a crashing halt and ushered in a new era in waste management. An era in which half the world, including the US, Canada, Europe, Japan and South Korea, has been forced to look for new landfills for its trash.

"It was a huge shock for the global recycling industry," said Arnaud Brunet of the Brussels-based Bureau of International Recycling (BIR). And it has had wide-ranging consequences: In the months after China's decision, for example, Malaysia tripled its imports of plastic waste.

The shock of China's decision brought about a dramatic shift in supply and demand. In 2018, the price of mixed paper waste fell from $75 (about €65) to just a few dollars per ton. The garbage trade between China and the US dropped by as much as 38 percent — a loss of $3.5 billion.

The trash had to go somewhere, and the developed nations had maxed out their capacity to recycle their hundreds of millions of tons of plastic and paper — especially since plastic can't be completely recycled.

Desperate trash traders were forced to look for new customers. They found them in Southeast Asia, in countries like Malaysia, Thailand, Vietnam, Indonesia and India — countries with fewer import regulations and less stringent controls, or none at all.

According to a September 2018 report from the World Bank, over 90 percent of waste in low-income countries is "often disposed in unregulated dumps or openly burned…[creating] serious health, safety and environmental consequences."

Only 10 percent of the waste is actually recycled — in many cases, sickening workers and those living nearby and killing plants and animals.

Opportunity for the West?

But some countries, including Thailand, Malaysia and Indonesia, have now decided they no longer want to be the world's trash heap. In recent months, they've all introduced new restrictions on waste imports in order to deal with the situation.

The Indonesian government has imposed a ban on imports of certain types of plastic waste from Western countries to "minimize the possibility of environmental and ecosystem degradation caused by waste." Speaking with DW, the Indonesian Embassy in Brussels told DW the trash issue was a "challenge."

"Despite the import restrictions, mixed plastic waste is still entering the country by shipping container. Waste smuggling is flourishing and governments are overburdened with controls," Heng Kiah Chun of Greenpeace Asia said.

Joseph Pickard, chief economist for the Institute of Scrap Recycling Industries in Washington, said the Asian restrictions on the US market have already become noticeable.

"In the US today, definitely more plastic ends up in local landfills and incinerators than a year ago," he said. However, Pickard sees the situation as an opportunity to invest more in local recycling facilities and technology.

"We have to understand that this is also a resource that can make money. That's where the crucial point for change lies, including at the local level."

'China is making itself independent'

In the EU, waste plastic exports have decreased since China made its decision. A proposal by Norway to change the Basel Convention — which controls international movement of waste — to make the export of poorly recyclable mixed plastics significantly more difficult is currently under discussion among the 28 member states.

An EU source in Brussels told DW that the proposal had been "welcomed," but stressed that it had to be realistic. "We fear that an export ban on plastic waste could have disadvantages for some member states and the local environment," said the source, pointing out that not every EU member has the capability to properly recycle plastics.

All of that is no longer China's problem. After years of economic growth and rising consumption, the 1.4 billion-strong Chinese population is producing enough of its own waste to sufficiently supply the country's recycling plants.

"China is developing its own collection systems, separating trash and recycling local waste," said Arnaud Brunet of BIR. "China is making itself independent of our waste."

And yet, China also exports waste it finds difficult to recycle. Hong Kong has for many years been one of the top 10 plastic waste exporters to Malaysia.

According to the official state news agency Xinhua, China wants to ban or significantly reduce the import of eight additional waste categories by the end of 2019. These would include electrical appliances, steel scrap from ships, car parts and wood.

What China is still happy to import, however, are recycled plastic from abroad. And more and more of that is coming from Chinese companies have set up shop in neighboring Southeast Asian countries, hoping to profit from China's import ban.

Since autumn 2017, recycling plants have "sprung up like mushrooms" in places like Malaysia — many run by Chinese companies. "Around the village, my neighbors and I have counted 40 recycling plants," says Lay Peng. And the toxic fumes that once hung over China are now blowing through places like Jenjarom.