Several major world powers and even members of the president's party have indicated they would like to see President Mugabe resign. Most branches of his ZANU-PF party have passed votes of no confidence against him. 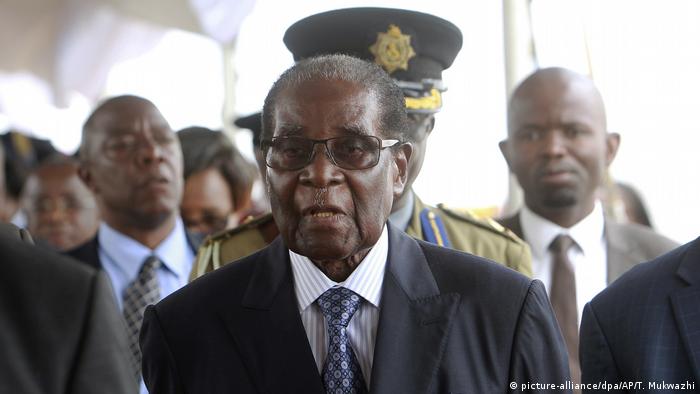 On Friday, it appeared as if the vast networks of intelligence and patronage that Zimbabwean President Robert Mugabe has spent 37 years consolidating were on the verge of collapse.

With global leaders, opposition politicians and most of his own party calling on him to step down, Mugabe made his first, muted, public appearance after a military takeover of the government was launched earlier in the week.

Dumiso Dabangwe, head of the ZAPU opposition party, told DW that Mugabe "should vacate his position."

US Secretary of State Rex Tillerson said that Mugabe's resignation would be a welcome opportunity to forge a "new path" after decades of increasingly authoritarian rule.

"We all should work together for a quick return to civilian rule in that country in accordance with their constitution," Tillerson said.

China, for its part, said it would be "glad to see an early restoration of national stability and social order."

A Chinese army commander had even offered to "step in" and restore order after Mugabe fired his longtime deputy Emmerson Mnangagwa two weeks ago in a move to make his wife, Grace Mugabe, his heir apparent.

Mnangagwa's supporters are planning to hold a rally in the capital, Harare, on Saturday.

Friday marked a shift in days of crisis and stalled negotiations between the 93-year-old Mugabe and the military, who took over government buildings and state-run media on Wednesday ostensibly to remove "criminals" from Mugabe's inner circle.

Not only did Mugabe finally make a public appearance after several days under house arrest, to attend a graduation ceremony, but high-ranking members of his own ZANU-PF party called for his ouster.

Eight out of ten of ZANU-PF's provincial have passed votes of no confidence in Mugabe, and at least one state committee has publicly demanded his resignation according to state-run broadcaster ZBC.

For some in Zimbabwe, Mugabe is still the hero of the country's independence struggle against Great Britain. But for many, he is an autocrat guilty of rights violations, who has brought the country's economy to the brink of collapse.