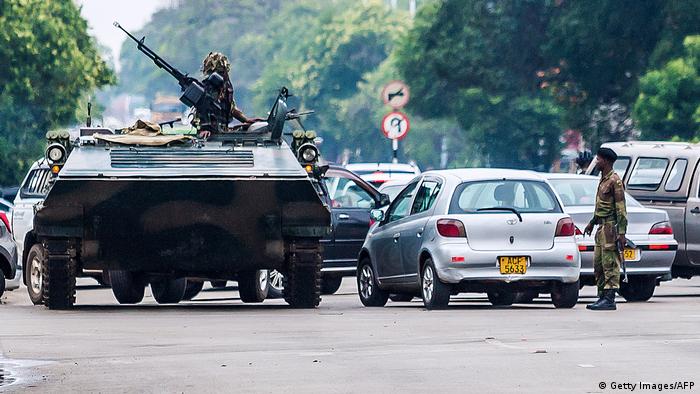 In Bonn, Germany, where he is attending the UN Climate Change conference, African Union (AU) President Alpha Conde told DW that he condemns the military takeover in Zimbabwe, and said he hoped to speak to Robert Mugabe soon.

"We are convinced that Zimbabweans will respect the constitution and that the succession of President Mugabe will be democratic. The African Union is convinced of that," Conde said.

Earlier on Wednesday, South African President Jacob Zuma confirmed that he had spoken to the 93-year-old Mugabe, whom he said was "fine" and under house arrest.

Army takes over in Zimbabwe

Army takes over in Zimbabwe

Zimbabwean Major General SB Moyo had said on state television that the army's takeover of government offices, the parliament, the airport and state broadcaster was "not a military takeover."

"We are only targeting criminals around him (Mugabe) who are committing crimes that are causing social and economic suffering in the country in order to bring them to justice," he said.

Armored vehicles and soldiers were seen throughout the capital city, Harare, Wednesday morning as many people rushed to withdraw money from banks.

Read about the events as they happened

Grace Mugabe — who reportedly fled to Namibia early Wednesday morning — had been publically positioning herself to succeed her husband as president.

That ambition led to a public feud with former Vice President Emmerson Mnangagwa, who had been seen as Mugabe's likely successor before the president fired him in early November.

Mnangagwa, often referred to by his nickname "the Crocodile," is a veteran of the country's independence struggle in the 1970s and popular with the country's military. Days after he was fired, the country's army chief, General Constantino Chiwenga, said he may be "obliged to take corrective measures."

Read more: How a decade of economic woe has fueled Zimbabwe's unrest

Chris Mutsvangwa, chairman of the war veterans' group, said in Johannesburg, South Africa that the head of the military had carried out "a bloodless correction of gross abuse of power."

He added that the army would usher Zimbabwe in a "better business environment" after years of disinvestment and economic decline and called on South Africa, southern Africa and the West to re-engage with the embattled nation.

The president of Zimbabwe's opposition Movement for Democratic Change (MDC) and former Finance Minister Tendai Biti told DW that while he condemned the military takeover, he felt it was time for President Mugabe to quit.

"We acknowledge that there are genuine issues in Zimbabwe that need redress," he said. "There is an economic crisis, there is a political crisis centered on President Mugabe. (…) There is the serious danger of a dynastic takeover by President Mugabe's wife."

South African President Zuma urged the Zimbabwean government and army to resolve their differences amicably and warned against any "unconstitutional changes" of government.

The US State Department said Washington was "concerned by recent actions undertaken by Zimbabwe's military forces" and called on the country's leaders to exercise restraint as uncertainty continues.

The European Union and Britain also expressed concern and called for a peaceful resolution to the crisis.

"Recent political developments in Zimbabwe and their spillover, including in relation to the country's security forces are a matter of concern," said an EU Commission spokesman.

British Foreign Secretary Boris Johnson told the British Parliament: "nobody wants simply to see the transition from one unelected tyrant to a next. (...) We want to see proper, free and fair elections." 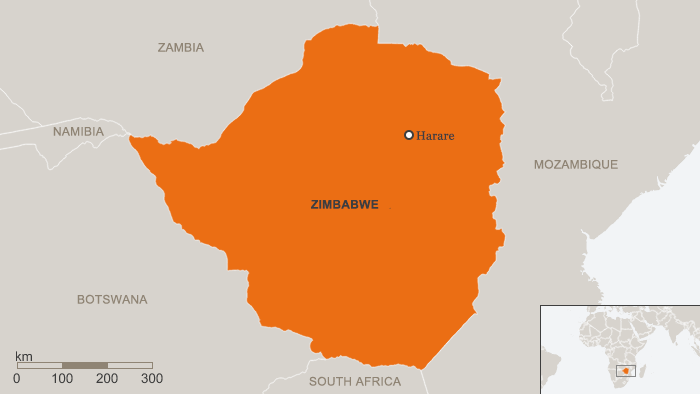 Robert Mugabe was arrested in the capital city, Harare

President Robert Mugabe's deputy and longtime ally Emmerson Mnangagwa has been fired. First Lady Grace Mugabe, who had called for him to go, is now a step closer to becoming the next vice president. (06.11.2017)