Zimbabweans stock up on essentials amid fears of hyperinflation | Africa | DW | 28.09.2017

Gas stations in Zimbabwe's capital Harare have run out of fuel amid a mounting economic crisis and people are stocking up on food. President Robert Mugabe blames social media as Privilege Musvanhiri reports. 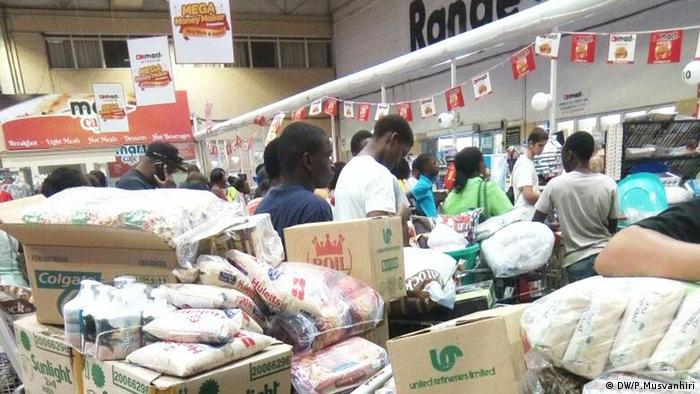 Long queues in front of banks and gas stations, empty shelves in supermarkets: Zimbabweans are trying to stack up on food, money and fuel amid fears the 2008 shortages and hyperinflation are bound to be repeated.

Over the weekend, people rushed to supermarkets to buy items they thought would run out quickly, such as staples like cooking oil and sugar.

Peoples' trust in the country's economy is on a record-low. Zimbabwe is grappling with cash shortages that have worsened in the past months. Some banks are unable to provide money to their customers which has prompted many to line up in the evenings to be able to withdraw cash the next day.

Zimbabwe adopted the US dollar as official currency in 2009, alongside the British pound and South African rand. Last year, the government introduced a domestic quasi-currency - "bond notes" pegged to the US dollar - to help ease shortages. But it didn't work.

"We have seen a slide in the value of the bond notes against the US dollar on the markets," said Prosper Chitambara, an economist with the Labor and Economic Development Research Institute of Zimbabwe.

Although bond notes have a 1:1 face value with the US dollar, people need $1.20 in bond notes for the equivalent of one dollar.

"A number of companies have to go to the parallel market to source foreign currency to buy critical inputs from outside the country. The parallel markets have fed into the inflationary spiral," he added. "This has further eroded confidence on the market."

That lack of confidence has led to panic buying of various goods. People are voicing their frustrations on social media, posting photos and videos of long queues.

Authorities have blamed social media posts for stirring up fear, saying people were spreading fake news through platforms such as WhatsApp, Twitter and Facebook.

On Sunday, charismatic pastor and leader of the #ThisFlag movement Evan Mawarire was arrested and charged with subversion after sharing a Facebook video showing fuel queues in the capital Harare.

Evan was released on bail by a Harare court on Tuesday.

Earlier this week, Zimbabwean President Robert Mugabe accused people of trying to sabotage the government while he was attending the United Nations General Assembly in New York.

"There are saboteurs who want to mess up things to cause mayhem in our absence. These are shortages that we can fix in one day or two," said Mugabe addressing his supporters upon his return from New York.

'Stocking up in case shops run out of food'

Shoppers and motorists who spoke to DW say they are worried about the future despite Mugabe's attempts to reassure people.

"We are trying to stock up because retailers are increasing prices. We are stocking up just in case the shops will run out of food," said Faith Rindai who was shopping at a grocery store in Harare.

"We are scared of a repeat of what happened in 2008. We do not want to struggle with our families. We have to manage," she added.

"Things are getting out of hand," said motorist David Sarieni. "We want change."

Economist Chitambara says bond notes were never a solution, but rather a stop-gap measure.

"Bond notes have created more problems by fueling the parallel market," he said. "The solution is only to address structural issues that can boast the economy. These are to do with increasing production," Chitambara added.

Zimbabwean police have violently dispersed protesters rallying against plans to introduce a "surrogate currency" to counter the cash crisis. Many fear the plan will return Zimbabwe to the days of crippling inflation. (17.08.2016)

Can protests lead to political change in Zimbabwe?

Protests are becoming common in Zimbabwe. Once known as Africa’s breadbasket, the country's economy is struggling with no money to pay salaries. Protesters are now using hastags to demand for a change of leadership. (20.07.2016)

The UK government has announced further measures to ease the rising demands for fuel, including the approval to put a pool of military drivers on standby. The country is facing a post-Brexit shortage of truck drivers.

Sub-Saharan Africa is experiencing a record surge in fuel prices as the Russian invasion of Ukraine drives up already steep energy costs.