Jubilant scenes have engulfed Zimbabwe's capital after news of the release of "This Flag" movement leader Evan Mawarire. The popular pastor had urged a fight against corruption. Privilege Musvanhiri reports from Harare. 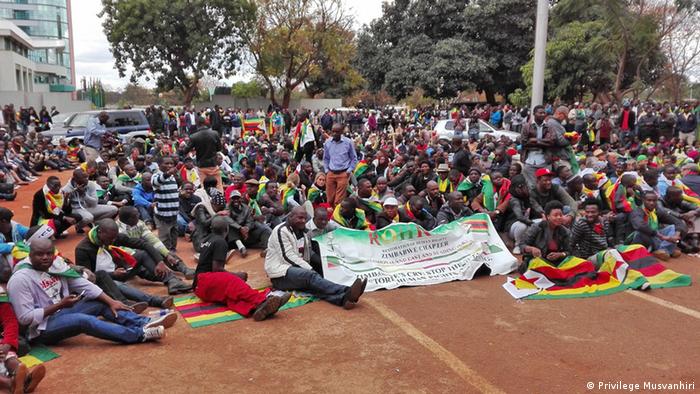 Hundreds of citizens who had mounted a 12-hour vigil at the magistrate's court erupted into song and dance, honking vehicles and flying the Zimbabwean flag.

The scene resembled independence celebrations or a parade of a hero who had just returned from exile as a crowd of nearly a thousand people sang, danced, prayed and shared solidarity messages.

Citizens from across the racial divide and with diverse political, religious and social beliefs gathered at the Harare magistrate court in a show of support for Evan Mawarire's citizen activism.

About 100 lawyers from the Zimbabwe Lawyers for Human Rights group were at the court to offer legal assistance.

The public gallery at the court was packed to the brim, and police maintained a heavy presence in and around the courthouse.

Observers said the turnout of citizens to the courts was a clear message to the state that what Evan is advocating for are issues affecting Zimbabweans from all walks of life.

One of the citizens present at Wednesday's court vigil, 49-year-old Claudia Mutasa, told DW that authorities fail to understand that Evan is not a politician who wants to form a government.

"Pastor Evan is not coming from a political standpoint. There is no denial that things are not well in the country. Arresting Evan is not fair. Government is violating fundamentals of democracy," Mutasa said.

Musician Willis Wataffi said it was high time the government stopped shifting the blame and pointing fingers at Western forces, who it always accuses of plotting to effect regime change.

"We are here not for a man, but for a cause. I am affected as an artist. If the ordinary citizen does not have money to spend, I am affected. They will not come to our shows," Willis said.

Evan Mawarire was initially arrested on public violence charges Tuesday, before the state changed the charges in court on Wednesday to subversion and unseating a constitutional government.

Had the treason charge stuck, he could have faced up to 20 years in prison.

Mawarire has been calling the Zimbabwe government to deal with corruption, injustices and abuse of state funds since April. 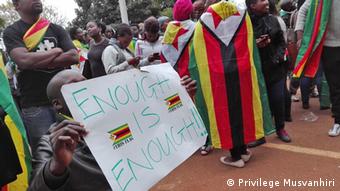 Mawarire supporters rejoiced upon hearning news he would not face charges

No case to answer

The sitting magistrate Vakai Chikwekwe could not approve of it and dismissed the case on procedural inconsistencies.

Changing or placing a new charge on an accused person in a court session is not permissible under the Zimbabwean constitution.

Speaking to DW after Evan's release, legal counselor Dzimbahwe Chimbga, of Zimbabwe Lawyers for Human Rights, said the judgment was a restoration of the law to protect citizens.

"We agree with the magistrate's ruling. It is consistent with the provisions of the Zimbabwe constitution. People have the freedom to express themselves," Chimbga said.

Evan Mawarire attracted the wrath of the state after mobilizing last week's protests that closed down businesses and schools across the country.

How much do protests threaten Zimbabwe's government?

After emerging from the court, Mawarire addressed the crowd and thanked them for being united.

He remains defiant and says citizens must keep the momentum to press President Mugabe's government to address socioeconomic issues affecting the country.

"We are not backing down anymore. This is our chance to speak to our government, and we won't get robbed of that chance," Evan said.

"We have not broken down any laws. The government intimidates us, they arrest us, and they scare us into keeping quiet, and we are saying we are done with that. If you touch one of us, you are touching all of us."

Growing disgruntlement is sweeping across the country with various groups expressing themselves against government policies.

Some have called it the era of hashtags that has seen Zimbabweans speaking out in an exceptional way.