How a decade of economic woe has fueled Zimbabwe′s unrest | Business | Economy and finance news from a German perspective | DW | 15.11.2017

Zimbabwe is in crisis after the tanks moved in to seize control of the country. But with inflation at 50 percent a month and a shortage of US dollars, it's economic instability that has stoked the current tensions. 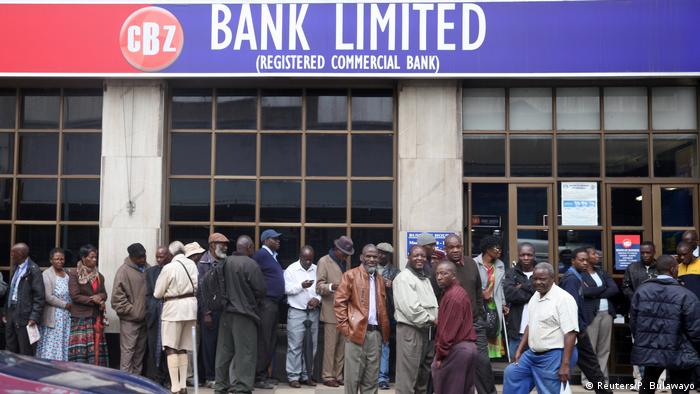 As Zimbabwe's military seized power on Wednesday, people in the country started to form long lines at banks to withdraw the limited cash available.

But Zimbabweans have been here before. President Robert Mugabe's handling of the economy has long been a heated issue in the country, with many fearing that the absence of dollars will fuel a deep financial depression, similar to the one that brought the country to its knees almost a decade ago.

Indeed, the warning signs are already there with imported goods running dry and economists indicating that, by some measures, inflation is now at 50 percent a month.

Over the past year, the country's creaking economy has left it teetering on the edge of collapse. Emmerson Mnangagwa, who was fired as Zimbabwe's vice-president by Mugabe last week, had been planning to breath new life into the economy by bringing back thousands of white farmers kicked off their land nearly two decades ago and improving relations with the World Bank and International Monetary Fund (IMF), who came close to expelling Zimbabwe from the fund in 2006.

For Zimbabweans the meltdown of 2007 and 2008 is still fresh in the memory when unemployment hit 94 percent.

It wasn't until 2009 that the country experienced a brief period of economic growth — its first in a decade — and in October 2015 the Zimbabwean dollar was finally abolished and replaced by foreign currencies, mainly the US dollar, although English pounds, South African rand, euros and Chinese renminbi have been officially accepted as currency.

Bitcoin climbed as much as 10 percent on Zimbabwe’s Golix exchange on Wednesday, Bloomberg reported. It noted that "the price of the cryptocurrency in the Southern African nation jumped as high as $13,499, almost double the rate at which it trades in international markets."

By September 2016, the country's economy was in trouble again and the then finance minister, Patrick Chinamasa, identified "low levels of production and the attendant trade gap, insignificant foreign direct investment and lack of access to international finance due to huge debt" as the main causes for its poor performance.

The government attempted to alleviate cash shortages by introducing bond notes in November 2016, pegged at the same level as the US dollar, but this has become subject to hyperinflation too.

Zimbabwe's economic strife has triggered a mass exodus from the country and the beginnings of a refugee crisis.

According to the annual report of Amnesty International on Zimbabwe, around a quarter of the country's 16.15 million population are affected by "an unsure food situation."

Hunger and oppression by the government have led to the politically persecuted fleeing to London, although the threat of deportation hangs over the reported 11,000 who have turned to the United Kingdom in the past year. Others look to Germany, with a reported 226 making refugee asylum applications in 2016.

The vast majority of refugees, however, remain in Africa as they seek protection in neighboring South Africa, Botswana and Mozambique.