Drones launched by Yemen's Houthi rebels have attacked a massive oil and gas field in Saudi Arabia. This is the second such attack on the Saudi energy industry in recent days and comes amid high Middle East tensions. 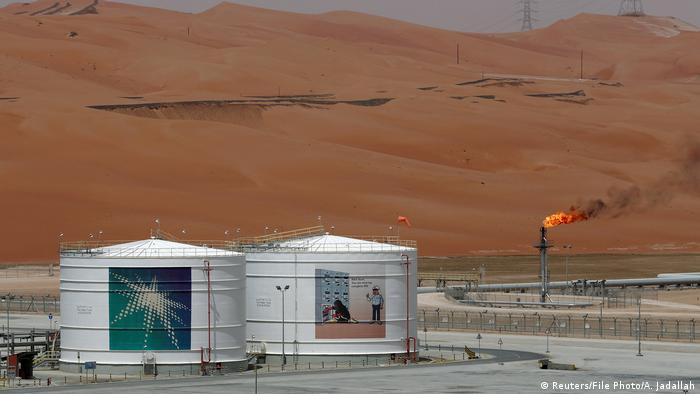 Yemen's Houthi rebels on Saturday carried out a drone strike on Saudi Arabia's Shaybah oil field, which produces about a million barrels of crude oil a day. It is the second such attack on the country's crucial energy industry in recent days.

Local media quoted Saudi officials as saying that production at the oil field was unaffected.

The Saudi acknowledgement of the attack came hours after Yahia Sarie, a military spokesman for the Houthis, issued a video statement claiming the rebels launched 10 bomb-laden drones targeting the field in their "biggest-ever" operation.

He threatened more attacks would be coming. "This is in response to their aggression toward us and our people in Yemen," Sarie said.

The Houthi rebels have carried out a spate of cross-border missile and drone attacks targeting Saudi air bases and other facilities in recent months. And the latest attack on the Shaybah oil field once again shows the reach of their drone program.

The conflict in Yemen is widely seen in the region as a proxy war between Sunni Muslim Saudi Arabia and its Shiite regional rival, Iran.

The Western-backed Sunni Muslim coalition intervened in Yemen in March 2015 to try to restore the internationally recognized government of Abed Rabbo Mansour Hadi after the Houthis ousted him from power in the capital, Sanaa, in late 2014.

Shaybah is situated some 1,200 kilometers (750 miles) from Houthi-controlled territory.

The oil field is in the Arabian Peninsula's Empty Quarter, a sea of sand where temperatures routinely hit 50 degrees Celsius (122 degrees Fahrenheit). On its website, Saudi Aramco refers to the field as "the most remote treasure on Earth," home to reserves of 14.3 billion barrels of oil and 25 trillion cubic feet of natural gas.

The field's distance from rebel-held territory in Yemen demonstrates the range of the Houthis' drones. UN investigators say the Houthis' new UAV-X drone likely has a range of up to 1,500 kilometers (930 miles). That puts Saudi oil fields, an Emirati nuclear power plant currently under construction, and Dubai's busy international airport within their range.

The drone assault also comes amid heightened tensions in the wider Middle East region between the US and Iran, whose supreme leader hosted a top Houthi official days earlier in Tehran.

Saudi Arabia has affirmed its support for the exiled Yemini leader after UAE-backed separatists seized the southern city of Aden from forces loyal to the internationally backed government. (12.08.2019)

At least 51 security personnel, including a key commander, have been killed in twin attacks in Yemen. One of the attacks reportedly involved the use of a ballistic missile. (01.08.2019)

Oil shipments were halted 10 days ago after two Saudi tankers came under attack by Houthi rebels. This week, Israel jumped into the fray, warning Iran that it was prepared to defend a key route — militarily if necessary. (04.08.2018)