Separatist forces in Yemen say they have taken control of the southern port city of Aden from forces loyal to the internationally backed government. The development complicates efforts to bring peace to the region. 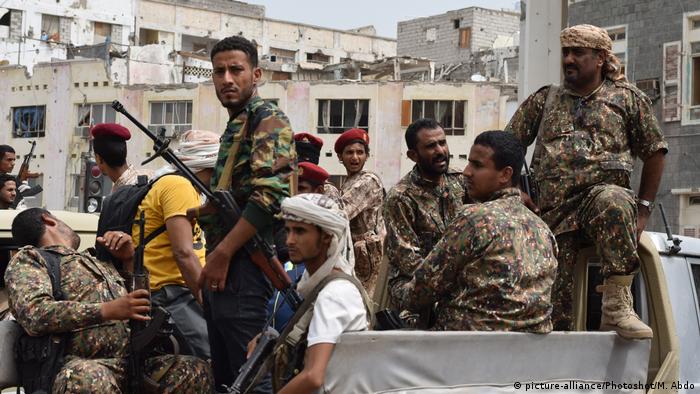 Southern Yemeni separatist forces said on Saturday they had seized the presidential palace in the country's second-biggest city, Aden, following days of clashes with government loyalists. "We took the Maashiq palace from presidential (guard) forces without a fight," a spokesman for the separatist-dominated Security Belt force told AFP news agency.

The separatists also took over the house of Interior Minister Ahmed al-Mayssari after he was evacuated by coalition forces, government officials said.

According to the UN, dozens of people were killed and hundreds were injured in the fighting.

The fighting erupted on Wednesday when forces loyal to the Southern Transitional Council (STC) attempted to break into the presidential palace in Aden. They were acting after a call from ex-Cabinet minister Hani Bin Braik, who serves as deputy head of the STC, to "topple" the government of President Abed Rabbo Mansour Hadi.

STC is backed by the United Arab Emirates (UAE).

Braik accused Hadi and his forces of being members of, or loyal to, the Yemeni branch of the Muslim Brotherhood, a pan-Arab political movement that the UAE and some other Arab countries view as a terrorist organization. The internationally recognized government, in turn, has accused Braik of fomenting sedition that would only serve Iran-backed rebels, known as Houthis.

After five years of war, Yemenis are the brink

Aden is the seat of power for Hadi, who has been staying in Saudi Arabia since the Houthis took over the capital, Sanaa, and ousted Hadi's government from power in 2014. A Sunni Muslim coalition led by Saudi Arabia entered the civil war in Yemen in March 2015 on behalf of Hadi's government.

The conflict has so far killed tens of thousands of people, pushed millions in the poorest Arabian Peninsula nation to the brink of famine and spawned the world's most devastating humanitarian crisis.

Saudi state TV said on Sunday that the coalition had attacked zones that pose a direct threat to a vital position belonging to the coalition-backed Yemeni government.

"This will be the first operation and would be followed by another if the coalition's statement was not complied with," state TV said.

Earlier a spokesman for the Saudi-led coalition was quoted in the state-run Saudi Press Agency as saying that "the coalition's joint leadership is calling for an immediate ceasefire in Yemen's interim capital of Aden... and will use military force against those who violate that."

He said the STC needed to "return immediately to its positions and withdraw from all positions they seized in the past days."

The separatists' move against Hadi could weaken the Saudi-led coalition's hand in any negotiations with the Houthis to form a transitional government to end the war.

The Houthis control Sanaa, Hodeidah and other urban centers. The Yemen conflict is widely seen in the region as a proxy war between Saudi Arabia and Iran. But the Houthis say their revolution is against corruption.

Houthi rebels have attacked a civilian airport in Saudi Arabia for the second time in less than two weeks. The Houthis said the strike was in retaliation for Saudi airstrikes in Yemen. (24.06.2019)

At least 51 security personnel, including a key commander, have been killed in twin attacks in Yemen. One of the attacks reportedly involved the use of a ballistic missile. (01.08.2019)