Rebel military camps belonging to the Iran-backed Houthi rebels have been targeted by an aerial bombardment. The operation follows last week's attempts by the United Nations to restart stalled peace talks. 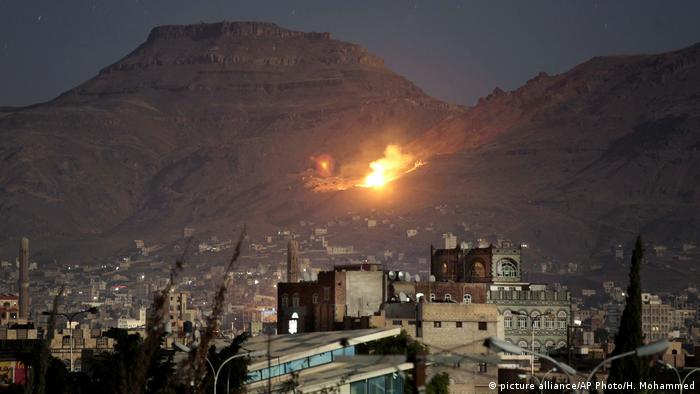 File photo showing a previous airstrike on the outskirts of the capital, Sanaa

The Saudi-led coalition on Saturday unleashed airstrikes on rebel positions in the Yemeni capital of Sanaa, Saudi state television reported early on Saturday.

Residents described hearing powerful explosions as a result of an aerial bombardment that targeted rebel military camps in several parts of the city. Flames were seen rising from the struck facilities.

There was no immediate word on casualties.

"The alliance command is committed to preventing the terrorist Houthi militia and other terrorist organizations from having access to such military capabilities."

Yemen has been at war since 2014, when Iran-backed Houthi rebels took over Sanaa.

The conflict intensified in March 2015, when the Houthis first advanced on the southern city of Aden. That prompted Saudi Arabia and Sunni allies to start an air campaign against the Shiite group and to restore the internationally recognized government to power.

Extremist groups have also taken advantage of the feud to expand their influence in the poor country.

The conflict has killed tens of thousands of people, many of whom are civilians, aid agencies say. Some 3.3 million people have been forced from their homes.

The warring parties met last week to discuss the stalled truce agreement for the contested port city of
Hodeida.

The deal was brokered in December in Sweden but has been interrupted by clashes.

The suffering of children caught up in the Yemen conflict has become "simply appalling," according to a UN report. It says thousands of kids have been killed, recruited as soldiers and subjected to devastating violence. (29.06.2019)

The UAE is beginning a partial military drawdown in Yemen. Experts say the country is pushing for a political solution to end the conflict, but growing US-Iran tension in the region may also have played a role. (10.07.2019)

The German government has given the green light for arms shipments worth over €1 billion so far this year to the Saudi-led coalition fighting in Yemen. The approval comes despite export restrictions being in place. (16.06.2019)