Famous Paris tourist spots have gone on lockdown during a fourth weekend of protests against French President Macron's policies. Police made hundreds of arrests and dozens of people were injured.

— Police detained hundreds of people under suspicion of intent to commit violence, destruction, or vandalism.

— According to police, some 8,000 people gathered for protests in Paris, with the Champs Elysees and Place de la Bastille being the main focal points.

— Some 89,000 police were deployed across France, with demonstrations also taking place in Belgium and the Netherlands.

18:40 That's all for DW's live blogging of Saturday's "yellow vest" protests in Paris. You can keep an eye on the DW app and dw.com for developing and breaking news on further demonstrations and international reaction.

18:30 France's interior minister, Christophe Castaner, has said the demonstrations "are now under control." He added that the high level of police presence will continue on Sunday, if necessary.

17:21 In Brussels, where a copycat protest against rising living costs has turned ugly, police detained more than 400 people, Demonstrators threw rocks and firecrackers and damaged shops and cars as they tried to reach official buildings. 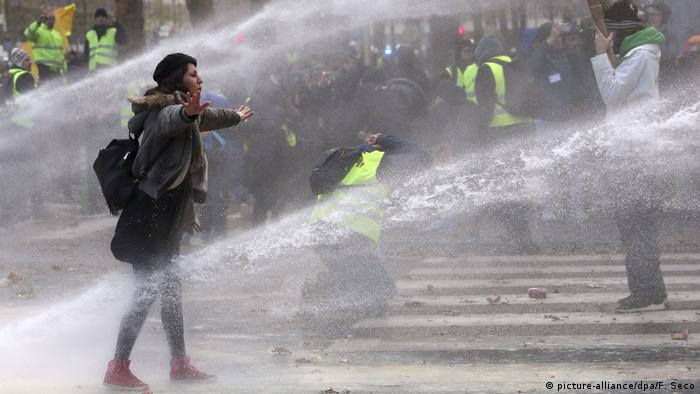 17:09 Fears of a repeat of last weekend's mass violence in Paris appear to have been so far unfounded. Although police used tear gas and armored vehicles to disperse protesters, only a few pockets of violence have erupted. More than 30 people were injured in clashes, and 737 people were arrested.

'Yellow vest' demonstrators on the Champs-Elysees carried a huge banner calling for French President Emmanuel Macron to resign and for France to hold an emergency election. 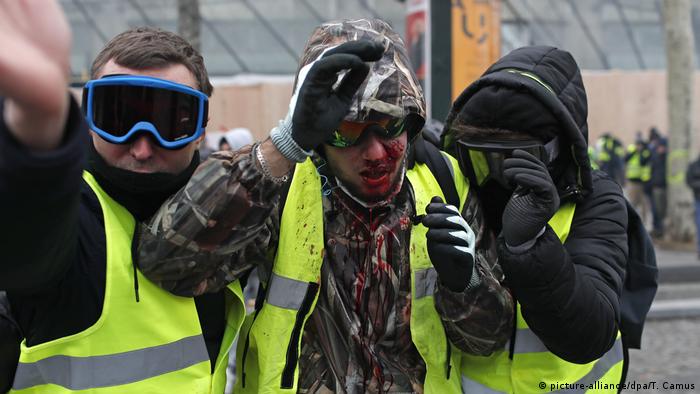 15:28  Clashes have broken out between police and protesters in Marseille's port neighborhood, one of the southern French city's main tourist sites.

15:09 Turkish President Recep Tayyip Erdogan has hit out at the "excessive force" used against protesters in Paris.

"Those who accused our police of oppression should see what their [French] police are doing now," he told supporters in Istanbul. The "scenes of chaos" show Europe has failed "the test on democracy, human rights, and freedom."

14:45 Isolated clashes have taken place in Brussels between police and protesters as a group of some 500 demonstrators ran into police blockades near the European Union institutions. At one point, police fired tear gas and water cannons at protesters, after being attacked with paving stones, fireworks, flares and other objects.

14:37 Police in Paris say some 500 people are in custody after being detained during Saturday's protests. Some were held as a preventative measure, others after clashes between riot officers and demonstrators. About a hundred others were briefly detained and searched.

14:30 Germany's leftist Linke Party has expressed solidarity with the 'yellow vest' protesters. After a meeting of the executive committee on Saturday, the party said in a statement that the action was justified as President Emmanuel Macron's government serves "only the interests of the super-rich."

13:30 US President Donald Trump has attacked the Paris climate change agreement on Twitter, citing the ongoing protests in the French capital as proof that his decision to reject the agreement was correct.

13:20 According to DW correspondent Lisa Louis, protests on the Champs Elysees have been relatively calm so far, with scuffles taking place in side streets.

13:00 Police have used water cannon against protesters throwing flares and lighting fires in one of the French capital's main shopping districts. There have been scattered clashes as demonstrators seeking to reach the Elysee Palace demand the resignation of President Emmanuel Macron.

Water cannon is also reported to have been used in Brussels, against protesters throwing stones near to Belgian government offices and the national parliament. Hundreds of yellow-vested demonstrators have been chanting for both Macron and Belgian Prime Minister Charles Michel to resign.

12:40 According to figures from the French Interior Ministry, there are 31,000 yellow vests protesting across France, with some 8,000 of them in the capital, Paris. The figure for the capital is down from last week.

11:45 A key part of the new police strategy in Paris appears to have been the confiscation of protective gear, such as goggles and gas masks as well as items that could be used as weapons, including small but heavy petanque bowling balls. The National Gendarmerie said some 5,000 people had been subject to checks, amid scenes that sometimes turned violent.

Police said some 8,000 police were deployed in the capital ahead of the protests in a mobilization that was "out of the ordinary," with 89,000 prepared for action across the country.

11:20 The protests have crossed borders with police in Brussels making some 70 arrests in connection with protests. European Union institutions in the Belgian capital, including the offices of the European Commission and the European Parliament, were sealed off as a precautionary measure. In the Netherlands, demonstrations were planned in the cities of Amsterdam and Rotterdam. Hundreds of police officers have been mobilized in Brussels

Demonstrations are taking place in both Belgium and in the Netherlands. Neither country has proposed a fuel tax hike of its own.

11:00 The Eiffel Tower and Louvre Museum are closed, along with hundreds of shops and businesses amid fears of possible looting. Many metro stations have also been shut, with top-flight football matches and major concerts canceled. 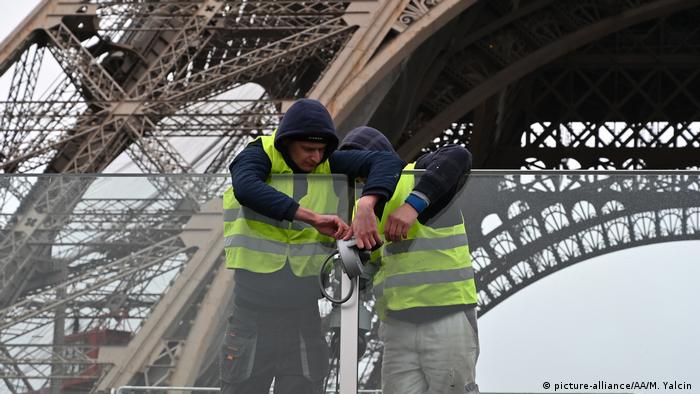 10:40 French Prime Minister Edouard Philippe says some 481 people have been arrested in Paris on the fourth weekend of protests by the yellow vests movement.

Officials said a large number of the individuals arrested as the city prepared for a fresh wave of protests were suspected of joining a gathering to prepare for violence, destruction, or vandalism. Most were later released.

Police in Paris had earlier fired tear gas canisters at yellow vest demonstrators as they gathered to stage another weekend of protests against French President Emmanuel Macron.

The tear gas was fired as the protests reached the Champs Elysees. One protester told DW's Catherine Martens that police had aggravated the situation.

Protesters told DW’s Lisa Louis that police had removed protective gear from protesters before allowing them onto the Champs Elysees.

Demonstrators wearing the trademark fluorescent "yellow vests" had gathered before dawn on Saturday, near the Arc de Triomphe. The landmark itself was damaged last weekend when it became the epicenter of violent protests in which 100 people were injured. 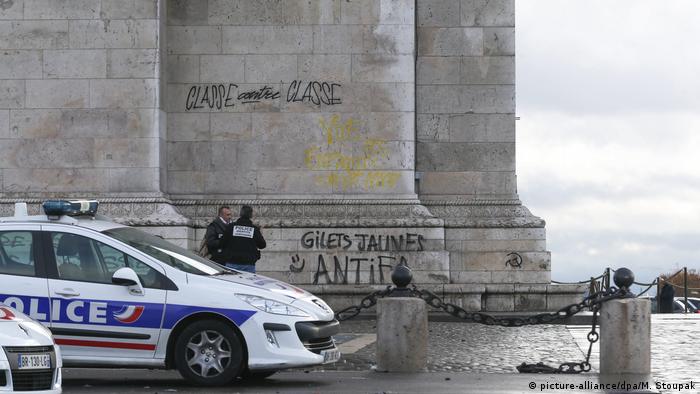 The Arc de Triomphe was vandalized in protests last week

Members of the movement have called for calm, with representatives having met French Prime Minister Edouard Philippe on Friday in an effort to ease tension.

But the French government has expressed fear that the protests over higher living costs could be hijacked by extremists from both the left and right of the political spectrum.

"According to the information we have, some radicalized and rebellious people will try to get mobilized tomorrow," Interior Minister Christophe Castaner told a press conference on Friday. "Some ultra-violent people want to take part."

President Emmanuel Macron earlier this week announced that the planned increased in petrol and diesel taxes — which acted as a catalyst for the unrest — would be canceled outright.

However, prominent protesters with wider demands — including broader tax cuts and salary raises — insisted they would descend on Paris anyway.

From the Arc de Triomphe in Paris to the Holocaust Memorial in Berlin, famed landmarks that are a magnet for visitors are repeatedly misused as a platform for protests — as the Yellow Vest riots in Paris prove. (04.12.2018)

Trump orders withdrawal of most US troops from Somalia 2h ago

US House votes to decriminalize marijuana, little chance in current Senate 4h ago