World powers call for an end to deadly Libya fighting

Major global and regional powers have urged the warring groups in Libya to stop their bloody fighting, warning that the bloodshed is worsening what is already a catastrophic humanitarian situation. 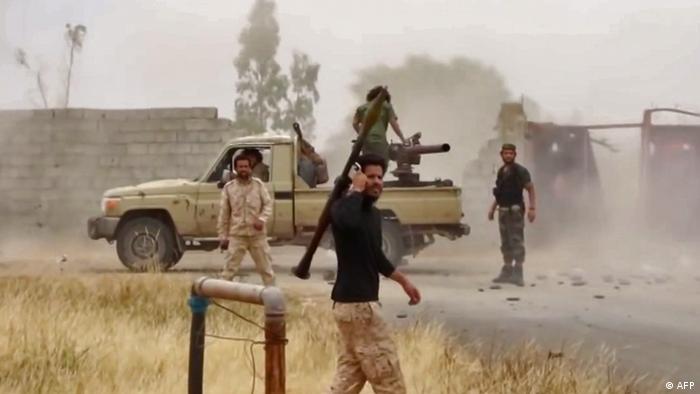 France, Britain, Egypt, the United Arab Emirates, the United States and Italy on Tuesday called for an immediate end of hostilities in Libya. The six countries voiced "deep concern" over the violence around the capital Tripoli and warned of attempts by "terrorist groups" to take advantage of the political void in Libya.

The six powers "call for an immediate de-escalation and halt to the current fighting, and urge the prompt return to the UN-mediated political process," a joint statement said.

The countries warned that the fighting "has fueled a growing humanitarian emergency," aggravating a migrant crisis, and voiced fear that extremists would thrive in the security vacuum.

Libya has been in the midst of a violent power struggle over the past several years. The overthrow and killing of longtime ruler Moammar Gadhafi in 2011 plunged the country into chaos, with rival militias battling for power.

Governance over the oil-rich nation has shifted between power centers in the west and the east.

But Tripoli has been the site of intense fighting since April, when General Khalifa Haftar and his Libyan National Army (LNA), which controls much of eastern and southern Libya, began their offensive on the capital, which is controlled by the internationally backed Government of National Accord (GNA).

The deteriorating humanitarian situation in the country has led to an increase in the number of people fleeing the conflict-ridden country for Europe.  Furthermore, Libya has become a major conduit for African migrants and refugees fleeing to Europe.

Libya's civil war: US 'undermines any hope for a successful political process'

The warring factions in Libya's stalemated conflict don't seem to be interested in a diplomatic solution. The United States could use its clout in order to trigger discussions — but it appears to be doing the opposite. (14.07.2019)