Several international players, including Turkey, are involved in the ongoing civil war in Libya. Ankara supports the internationally recognized Libyan unity government. What are the interests at play here? 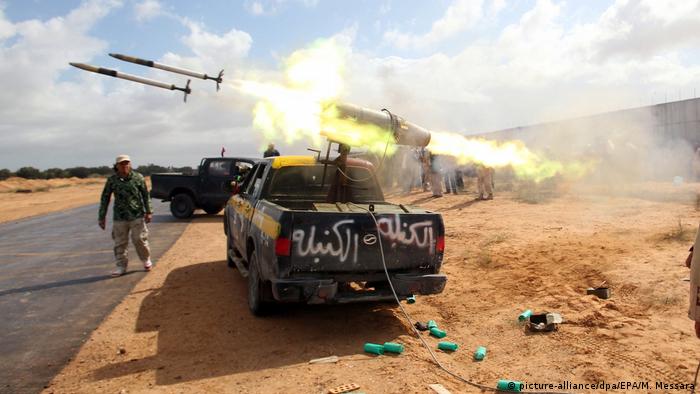 With the civil war still raging in Libya, the fight for the capital, Tripoli, is escalating. A number of other countries are involved in the conflict, among them Turkey, which appears increasingly self-assured in its support for the internationally recognized government in Tripoli.

This government is engaged in a civil war with the self-proclaimed Libyan National Army (LNA), led by the renegade general, Khalifa Haftar. Ankara's involvement has infuriated the general, and over the past few weeks his attitude toward Turkey has hardened. The LNA has banned commercial flights between the two countries, prohibited Turkish ships from docking on the Libyan coast and threatened to arrest Turkish citizens. Six Turkish citizens were in fact detained for several hours in late June, and were only freed after stern threats from Ankara.

These escalating tensions follow the heavy defeat Haftar suffered when making an advance on Tripoli. A major offensive was launched at the beginning of April, but it failed; shortly afterward, government troops also recaptured the key city of Gharyan in western Libya. These troops were equipped with armored cars and drones supplied by Turkey.

Libya is a country rich in oil and gas reserves that borders important Mediterranean trade routes. The country's destabilization aroused the avarice of various international players, including the Turkish government.

Oytun Organ of the Center for Middle Eastern Strategic Studies believes this avarice was one of the decisive factors that prompted Ankara to interfere in Libya. "A lot of Turkish companies were already active in Libya under [Libyan dictator Moammar] Gadhafi," he said.

Among other things, Turkish companies were also involved in numerous lucrative construction projects in Libya. Precise figures aren't available, but the volume of investment is believed to have totaled several billion US dollars. "But after the civil war [the 2011 war that eventually led to the fall of Gadhafi — Editor's note], Libya became less economically important," explained Organ. "Interest in investment declined markedly."

However, the Turkish government remained in close contact with the unity government in Tripoli, and Turkish firms continued to receive contracts — like the one to extend the coastal road in Tripoli. When the conflict with Haftar broke out many of these construction projects were put on ice, and Turkish companies working in Libya lost a great deal of money as a result. The more areas Haftar seizes from the unity government, the smaller the chances the companies will see their money again.

There is also an ideological aspect to Turkish interference in the Libyan conflict. Much of Haftar's support comes from Saudi Arabia, the United Arab Emirates and Egypt. All three countries are united in their bitter opposition to the Muslim Brotherhood, which they consider a threat. Turkey, however, also supported Libyan groups close to the Islamist Muslim Brotherhood in the civil war that led to the fall of Gadhafi.

Nonetheless, Organ maintains this is not the crucial issue, as Turkey's support is not confined solely to the Muslim Brotherhood. "Turkey primarily supports the rightful government in Tripoli," he said. "Ankara supplies it with weapons, which it is legitimate according to international law." Along with the Libyan unity government, Turkey and Qatar are able to form a counterweight to the power bloc centered on Saudi Arabia — a constellation also found in other parts of the Middle East.

Turkey and the Tripoli government held talks as early as April with the aim of stopping Haftar's advance. These were said to have been concerned with closer cooperation on military and security issues. Militias fighting on behalf of the unity government are believed to have already received direct arms shipments.

'On the brink of a proxy war'

Organ assumes Turkey is on the brink of a proxy war, and that this conflict could well escalate further. "A balance of power has evolved. That's important and desirable from Turkey's point of view. But it also means that Libya effectively remains divided," he said.

At the same time, said Organ, this equilibrium between the two camps will entrench the conflict. "They won't reach any agreement, because neither side has an advantage over the other that it can build on," he said.

Emrah Kekilli from the SETA Foundation for Political, Economic and Social Research also believes Libya is in deadlock. In his view, Haftar is a militia leader who is not abiding by the law. Turkish President Recep Tayyip Erdogan also recently railed against Haftar, calling him "just a pirate."

According to Kekilli, Haftar is the reason why resolving the conflict in Libya currently seems hopeless. "The drastic response to Ankara stems from the fact that the general hasn't scored any victories in months," said Kekilli. "He's trying to set up a foreign scapegoat."