Migrants in Tripoli are staging a hunger strike demanding better protection by the UN as the death toll rises to staggering heights. But the conflict in Tripoli shows no sign of slowing. 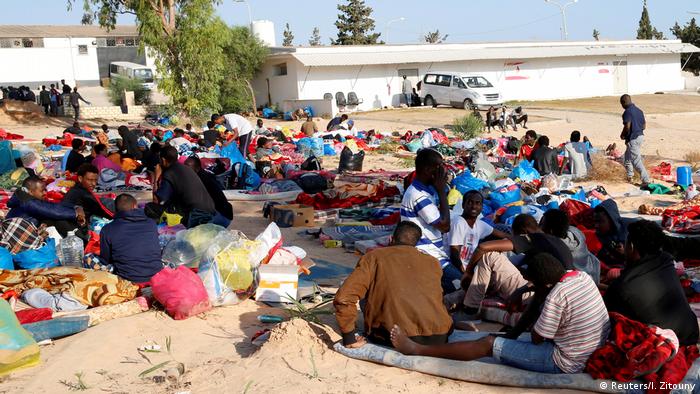 More than 360 people on Tuesday participated in a hunger strike that started over the weekend at the Tajoura migrant detention center on the outskirts of the Libyan capital, Tripoli. This comes as the World Health Organization (WHO) said more than 1,000 people have been killed and over 5,500 injured since fighting in Tripoli broke out in April.

According to a Libyan migration official, migrants being held at the Tajoura center said they want the UN to guarantee their safety after two airstrikes hit the facility last Tuesday, killing more than 50 people and wounding another 130.

German Chancellor Angela Merkel on Tuesday condemned the "horrible attack" on the migrant center while emphasizing that a political solution to the conflict is necessary. Merkel pointed out that Germany, as a UN Security Council member, holds the chairmanship of the sanctions committee on Libya.

Speaking at a diplomatic reception in Meseberg, north of Berlin, Merkel also demanded that the international community cease all arms exports to Libya and called for an "unconditional ceasefire" in Tripoli. The chancellor emphasized that the situation in Libya cannot be allowed to deteriorate like the war in Syria.

"Far too many weapons reach Libya from external actors," Merkel said. "There needs to be an arms embargo implemented in order to counteract any further escalation." 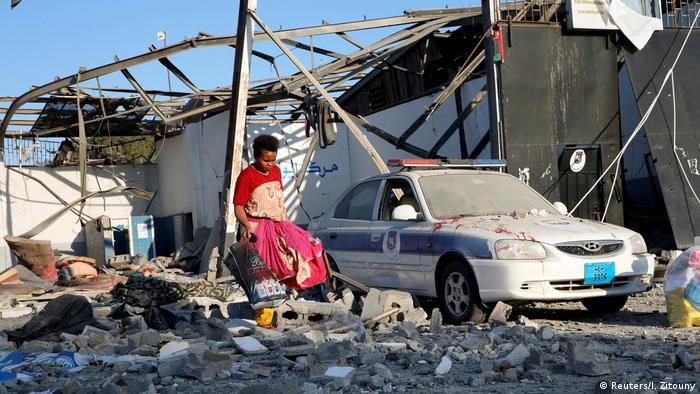 Civilians caught in the crossfire

Fighting in Tripoli has been fierce since the self-styled Libyan National Army (LNA), led by General Khalifa Haftar, launched an offensive April for control of Tripoli. In a stalemated conflict, Haftar's forces are battling militias backed by Libya's internationally recognized government.

No one claimed responsibility for the attack on the refugee center, which may have been caught in the crossfire as it is located near Tripoli's only functioning airport.

Tripoli's Government of National Accord (GNA) blamed the attack on Haftar's forces, who in turn accused the GNA of carrying out the airstrike.

Mahmoud Taweer, a spokesman for the Tajoura center, told the German news agency DPA that the detainees are refusing to sleep indoors, out of fear of attacks during the night. Many of those killed were crushed when the building's roof collapsed. At the time of the attack, 600 migrants were being held at the center.

"A UN delegation visited the center to persuade them to end the hunger strike, but to no avail," Taweer said, adding that the migrants do not want to be transferred to another center because they are afraid it would delay their journey out of Libya.

According to figures from the International Organization for Migration, at least 5,200 people are currently being held in official detention centers in Libya.

After Libyan dictator Moammar Gadhafi was toppled in 2011, the country became a major transit point for migrants fleeing from the Middle East and sub-Saharan Africa to Europe. Thousands of migrants captured by Libyan forces are being held in detention centers near the frontlines.

On Friday, the UN Security Council called for both sides to de-escalate tensions.  As the death toll rises, the WHO has said it is continuing to send doctors and medical supplies to help hospitals treat patients.

"Our teams have performed more than 1,700 surgeries in 3 months," the WHO said in a statement.

The fighting has also caused civilians to desert entire neighborhoods, and the battle lines have changed little since fighting began. In the southern part of Tripoli, both sides are dug in and firing artillery at one another.

Haftar's supporters have said he is the only leader who can end militia rule and restore stability to Libya. His opponents have countered that he is a strongman who wants to establish a military dictatorship.