Germany's back-to-back wins won't have struck fear in the hearts of tournament favorites, but they have all-but secured a spot in the knockout stages. Their rebuild is showing signs of great promise in its early stages. 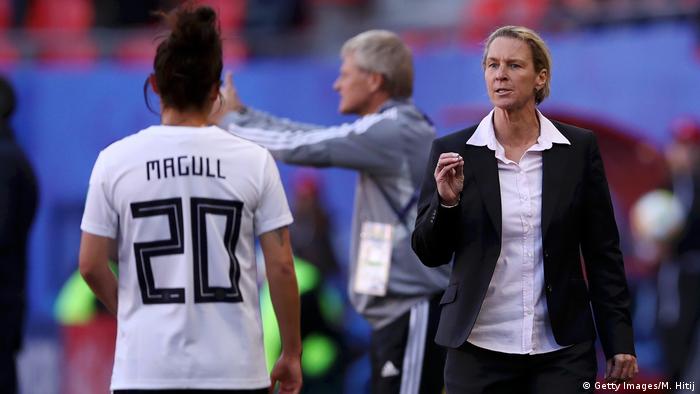 Despite sitting second in the FIFA World Rankings, Germany began their World Cup campaign in France largely unburdened by the weight of expectation thanks to a youthful squad and a new vision.

Now with two wins from two in Group B, Martina Voss-Tecklenburg's side has already demonstrated the iron will of battle-hardened tournament veterans. The narrative is changing.

The match-winning moment against Spain - their toughest test in the group stages - was perhaps the most fitting example.

Sara Däbritz capitalized on a moment of complacency from Spain's most experienced player, captain Marta Torrejon, who in failing to clear allowed the 24-year-old to slide home her third goal in World Cup group stage games.

"I speculated on the fact I could still get there and just went in on the slide. That it went in was incredible," Däbritz told reporters after the game.

Up against a Spanish backline boasting an elite defender in Irene Paredes and without their own playmaker extraordinaire Dszenifer Marozsan, Germany knew it wasn't going to be a straight-forward affair.

"We talked about the fact we may only get one moment in the game," Voss-Tecklenburg said afterwards. "We knew that it would be very difficult to play against Spain, a very strong opponent. It was a very fast game. It was not always easy for us. We were not always very compact."

A tactical tweak at halftime that limited Spain's threat from vertical long balls was synonymous with the learning curve the Germany women's team finds themselves on. With Voss-Tecklenburg bringing a wealth of knowledge and personal motivation to the table, Germany are having to absorb and adapt in equal measure.

While their performances against China and Spain won't have been enough to strike fear in the hearts of any of the tournament favorites, Germany are on a very promising path.

The similarities between the victories didn't stop at the score line. Giulia Gwinn (19) grabbed the headlines with her match-winner against China, while against Spain fellow teenagers Lena Oberdorf (17) and substitute Klara Bühl (18) rose to the challenge.

In both encounters, Germany had to survive a few scares, but with the fine margins falling their way in both, they were able to grind out positive results.

"At the end of the day, what matters is the end result," said Voss-Tecklenburg. "It's a very difficult group. The first two matches were difficult and now we have six points."

"In the long term, we want to reestablish ourselves at the top of the game," Voss-Tecklenburg told DW before the tournament started."It's a great challenge. International women's football has developed hugely. There are far more teams playing at the top level today. Twelve years ago, things were different. We have to face that fact and work our way through the process."

So far, Germany are working their way through this tournament. Their perfect record so far in France is not just laying the foundations for a successful run in the tournament, but a future that could live up to previous golden generations.