Germany moved one step closer to the knockout stages after making it two wins out of two with another gritty performance. Spain provided tough opposition in Valenciennes, but like China failed to take their chances. 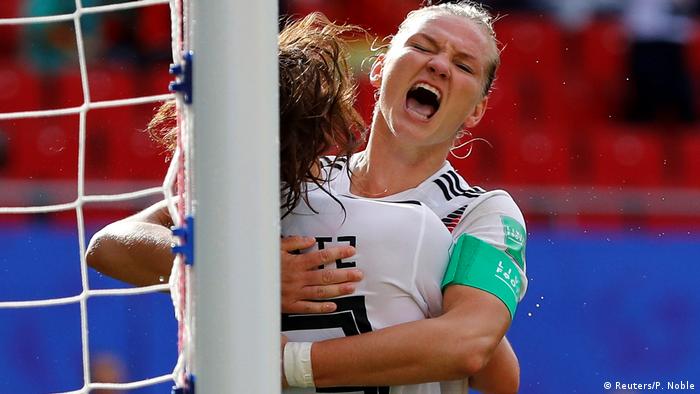 Another World Cup game, another one-goal win for Germany. This young side might not be impressing with their performances, but they are getting the results.

"It was a lot of hard work today," Svenja Huth said afterwards. "We were lucky not to go down 1-0. I think we deserved to win the three points because we really battled today."

Germany certainly did have to battle and Nahikari Garcia had two early chances to put Spain ahead but couldn't take advantage.

"We didn't start well. We were nervous and a bit fortunate not to go a goal down," Martina Voss-Tecklenburg said afterwards.

"It was a win of wills," said Sara Däbritz, who provided the key goal when she reacted faster than Spanish defender Marta Torrejon to a rebound after Alexandra Popp's header was spilled by Panos.

In the second half, Spain pushed for an equalizer and had the intent but not the quality. Germany improved, and showed plenty of spirit to see out the win. Popp moved from attack to holding midfield to make sure of the result, and to remind the world of her quality, while 18-year-old Klara Bühl impressed off the bench.

"We scored and in the second half we delivered a hugely committed performance," Voss-Tecklenburg said afterwards.

Germany are unbeaten in 18 straight World Cup group-stage games now, and while this team is keen to look forward rather than at its successful history this is certainly the start of something for this Germany team.

Voss-Tecklenburg's side face South Africa in their final group-stage game on June 17. 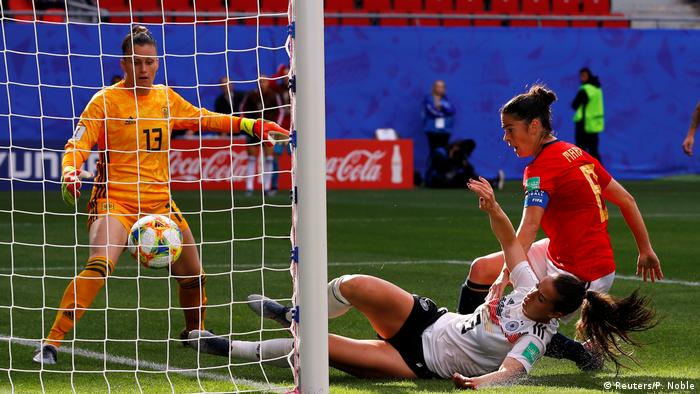 Germany earn a hard-fought victory against a Spanish side that put in a spirited display that ultimately deserved a point. Sara Däbritz slid in a goal just before the break after Popp's header had been spilled by Panos, but it was Spain who had the better chances. Ultimately though, Germany did what they do best at tournaments at that was get the win.

90+2' Popp blocks a shot as Spain try to find a way through from a corner. Then Schult falls on it. Is that it?

90+1' There will be three minutes of added time.

88' Germany escape! It looks like Hegering commits a tug as a Spanish player turns in the box but despite a VAR check, no penalty is given. Close call. Are Spain going to get an equalizer?

86' Germany win a corner because Klara Bühl is really putting herself into the game. The corner ends in a half chance, with Huth hanging the cross up. There's hesitation and then there's a header from Bühl but it's straight at the keeper. Nearly!

81' Spain make a like for like change in midfield, bringing on Bonmati for Putellas. Time to go for it. Some strong tackles flying in from Spain now as they grow desperate.

76' CHANCE! Däbritz meets a corner to squeeze a header through a crowd but Panos gets down low to save it.

71' Germany must stop clearing the ball straight to the Spanish. They look good for a goal and arguably deserve one too, but they've got to find a way through Germany first and they've now only got 20 minutes to do so.

65' Bühl has changed the game a bit. A cheeky nutmeg is followed by another effort, again over the bar. The intent is clear though. Spain have made a couple of changes. Lena Oberdorf, who just 17 by the way, makes way for Lina Magull. What an effort from the teenager. Spain upping the pressure a bit. A key period for Germany to survive.

58' Again, the game finds itself busy in midfield with misplaced passes at key moments. Germany brought on Klara Bühl for Hendrich earlier by the way, which is an attacking sub. Bühl nearly grabs a second after a neat cutback, but Panos saves. Down the other end, Schweers is booked for a late tackle - which could have been red given how clear through the striker was. Torrejon has a chance for redemption with the free kick but hits it into the ball.

49' CHANCES! Spain again cause trouble with a cross, but put it wide. Then Germany break, Gwinn dinks a wonderful ball into Popp and she should do better with a free header but it's straight at Panos. Good chance there, and Popp knows it. 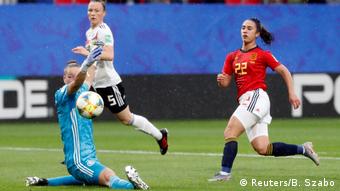 46' Spain get us restarted.

Germany lead, but it is a slender and fortunate lead. Nahikari Garcia could have had two goals, but wasted her chance. Germany looked sloppy and unstable at the back to start, and although they have slowly stablized, they keep making life easy for Spain in attack. The goal was odd and against the run of play, but perhaps that is what Germany are going to do in this tournament. Win without playing that well.

45+2' Germany invite Spain into the box with another misplaced pass, but they just about deal with it. Not a convincing lead, that's for sure.

43' GOAL! 1-0 Germany (Däbritz) Out of nowhere, Germany lead. Huth gets a superb cross in from the right which beats Paredes. Popp sends the header goalwards, Panos saves but spills it and Däbritz slides in the rebound despite the attention of Torrejon. Another look at tit though, Torrejon dallies and did have a chance to clear it, but didn't for some reason. Odd. Nevertheless, Germany are ahead and will be very happy about that given the way this half has gone.

39' Torrecilla takes a clattering, and needs some treatment. She's good to go soon enough though. The sun is out. The football has turned into a midfield battle.

31' Svenja Huth is once again at the heart of everything good for Germany. She gets a cross in that the Spanish defense clear and then gets a shot away but it's comfortable for Panos. This is better from Germany.

27' CHANCE! Germany get something going forward, finally. Panos manages to palm a cross away and before anyone can get to a rebound it's cleared.

23' Misplaced passes continue to make this game stop-start in nature. Germany are looking a bit more confident at the back, but haven't mustered up much going forward. 16' CHANCE! Germany are looking all over the place at the back. A poor clearance lands straight at the feet of a Spanish attacker. The ball is worked quickly across and after a dummy, a first-time shot fizzes wide. Germany need to find their feet in this one, despite the slippy conditions.

14' CHANCE! Spain with a ball down the middle again and again it proves a problem. Neither central defenders deal with and Nahikari gets through. Schult comes out but only half of the way, but Nahikari hits it wide. Another big chance and from Germany's perspective, a far too easily allowed one.

11' It's end-to-end, just without the real chancecs (other than the Nahikari one). The rain has stopped now. A brief but intense shower.

6' CHANCE! A mistake by Hegering on a long ball by lets Nahikari through and she's suddenly one on one, but Doorsoun makes a billiant recovering tackle to deny the Spaniard. That was close.

5' Bit scrappy in the wet here. Some strong challenges being thrown in as well. Proper football battle.

3' As the game starts, so does the rain. It quickly becomes heavy. This will change up the nature of this one. Germany get a free kick chance, but can't get it over the wall.

1' We are underway! Germany get us started, wearing the white, throwback kit that I want one of. What a kit. Spain are in red.

— Teams are out. Time for the anthems. Germany's is up first. Never really gets the sporting juices flowing does it? The Spain one though. Put me in coach!

— For those who didn't catch Spain's opener, they came back from a goal down against South Africa to turn it around and win 3-1. They benefited from a fortunate penalty decision, and in fact scored two penalties to put the game in their favor. While things go their way tonight?

— TEAM! Voss-Tecklenburg does indeed make changes. Verena Schweers comes in for Carolin Simon, while Lena Oberdorf does replace Marozsan. Melanie Leupolz is also dropped, with the experienced Lena Goeßling coming into midfield. Could prove a masterstroke.

Spain stick with Hermoso in the playmaking role, and keep things with the same defensive set. There are changes in midfield, notably with Nahikari Garcia coming in to support Hermoso in attack.

— Can this young Germany team meet expectations? There are advantages to having a young team, but it can also hold a team back. This Germany side is in a rebuild, and Martina Voss-Tecklenburg knows that a good tournament here could be the start of a future success.

— Despite winning three points though, Germany lost their playmaker. Dzsenifer Marozsan broke her toeand is likely to miss out on the rest of the tournament. Who will replace her? Lena Oberdorf? She impressed last time out. Perhaps this will be her time.

— Good afternoon! One goal proved enough for Germany in their first game, but they did not dominate a China side that could easily have upset the odds if they had shown greater composure in front of goal. Tournament teams do just that though, and once you reach the knockouts it doesn't matter.