Germany have delivered the biggest win in the country's ice hockey history, beating defending champions Canada to advance to the Olympic gold medal game. Neither the team nor the country can quite believe it. 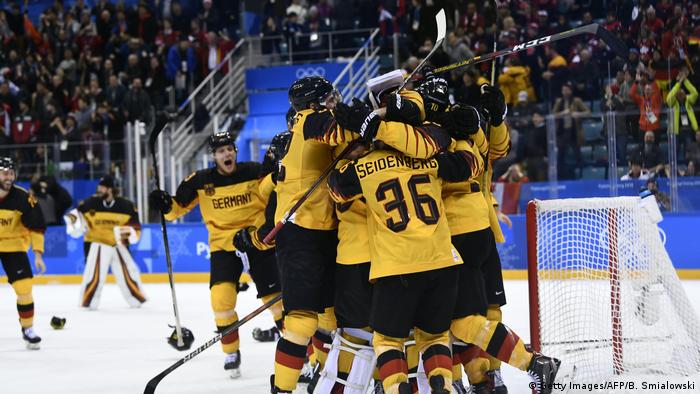 Watching the players and coach Marco Sturm being interviewed on German public broadcaster ARD after Friday's game, it was clear that none of them had yet grasped what they had just achieved.

By beating Canada, the defending gold medalists from both the 2010 Winter Games in Vancouver and 2014 in Sochi, 4-3, Germany not only advanced to the final, but secured at worst a silver medal, making this the most successful Olympic ice hockey tournament in the country's history. Previously, Germany's best tournaments had been in 1932, when they won bronze, and in 1976, when West Germany also won bronze. Until this Friday, they had been widely regarded as the country's greatest-ever achievement in the world's fastest team sport — but not anymore.

"Crazy, just crazy," were the first words out of coach Sturm's mouth when the microphone was held before him. "It's unbelievable, what the team achieved. We had never before been in a situation in which we had been under positive pressure before. We had to stay cool. This is unique. The lads need to savor it," he said, before promising to buy a round of beers for his team.

Goalie Danny aus den Birken, who looked sharp throughout, also struggled to find the words to describe his feelings.

"We definitely have silver," he said, with his mask lifted and perched on top of his head. "We have a medal. We have made a collective dream come true. It's mad. I still have to grasp what has happened."

Captain Marcel Goc, a player with more than 600 NHL games under his belt, was unable to hold back his tears of joy.

"It's an unbelievable feeling, the centerman said. "I'm just happy, I am so proud that we have achieved this."

The one Canadian-born player on the German team, Brooks Macek, said he hoped the victory would help give the sport a boost in Germany, where it is usually completely and utterly overshadowed by football.

"In Germany, I think the main sport that all the kids want to play is soccer," the Winnipeg native, who opened the scoring in the semifinal said. "And I think if there's a ton of people watching back in Germany maybe it'll push them toward ice hockey instead of soccer. So I think it's huge for the sport." 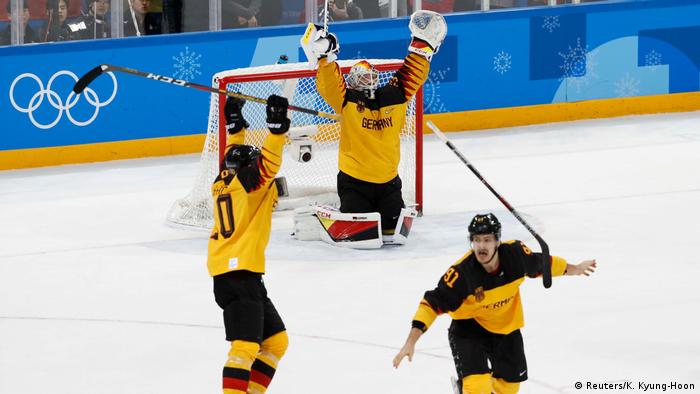 However, the players and the coaching staff were certainly not the only ones who were bowled over by this historic win.

"This team has won the hearts of all German sports fans," former national ice hockey team coach Hans Zach said. "In the final, anything is possible. The chance is that the Russians will underestimate us."

"Wow, it's unbelievable, what you've achieved," said the manager of the national football team, Oliver Bierhoff. "For this, a heartfelt congratulations from the national [football] team and from me."

Tom Kühnhackl of the Pittsburgh Penguins knows all about the"Wunder von Innsbruck," as his father Erich was part of the 1976 bronze medal winning team. And had the National Hockey League (NHL) players been allowed to compete at these Olympics, he would have almost certainly been in Pyeongchang.

"You guy's are completely nuts," was his comment on what's bound to become known in Germany as the "Wunder von Pyeongchang."

"Unbelievable! Who would have predicted this before the tournament," said German tennis legend Boris Becker. "Let's go guys."

Perhaps the most amusing comment came in a tweet from Germany's foreign office, in which it issued travel advice for Germans visiting South Korea — and Canada. It said that any Germans visiting Canada at this time should avoid the topic of ice hockey.

While Marco Sturm and his men will take a few hours to enjoy their historic win this Friday night, one can be assured that it will be back to business on Saturday, as they look to prepare for Sunday's even bigger game, against the Olympic Athletes from Russia, who have looked very much the strongest team in the tournament so far.

A hot commodity among NHL GMs?

In that gold medal game, for which fans back home will have to get up extremely early on Sunday morning, Germany have nothing to lose — or do they?

You've got to think that now that he has led a team that didn't even qualify for the tournament in Sochi all the way to the gold medal game in Pyeongchang, Marco Sturm is bound to have drawn the attention of any NHL general manager looking to make a coaching change somewhere down the road.