Will supermarkets in Germany ever embrace self-checkouts? | Business | Economy and finance news from a German perspective | DW | 11.09.2020

Will supermarkets in Germany ever embrace self-checkouts? 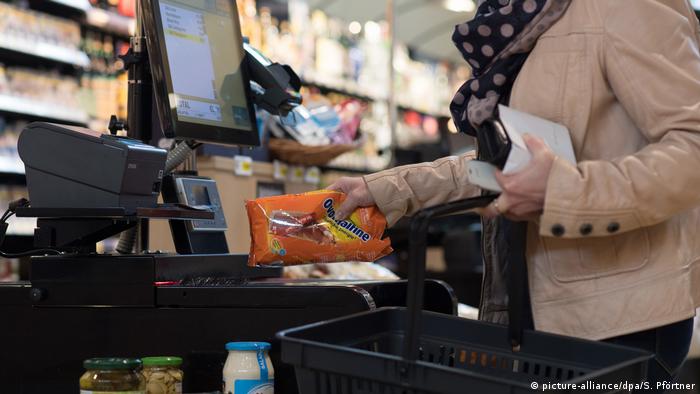 Paying for your groceries at a German supermarket can be bewildering and occasionally bizarre for those with experience of doing their shopping in other countries.

A slow-moving, 10 person-deep queue for a single cash register is not uncommon. And if the surge is ever deemed sufficiently large for that magical moment when a second cash register is opened, don't expect your place in the original queue to have any bearing on where you will end up in the new queue.

That's because many shoppers will typically just swoop straight to the top of the new queue if they happen to see it opening first. For newcomers to the "system," it can seem pretty rude.

And the one thing you can almost certainly be sure of is that there won't be a self-checkout machine (SCO) in sight. Despite being a supermarket superpower, Germany has been very slow compared with other European countries in terms of its adoption of the technology.

SCOs are points of sale where customers scan their own products and pay themselves, without the need for a human cashier. As of late 2019, there were 117,000 SCOs in Europe according to RBR London, a consultancy. Less than 3,000 of these were in Germany. Considering that Germany has by far the biggest population and one of the highest density of supermarkets in Europe, the number is very low. 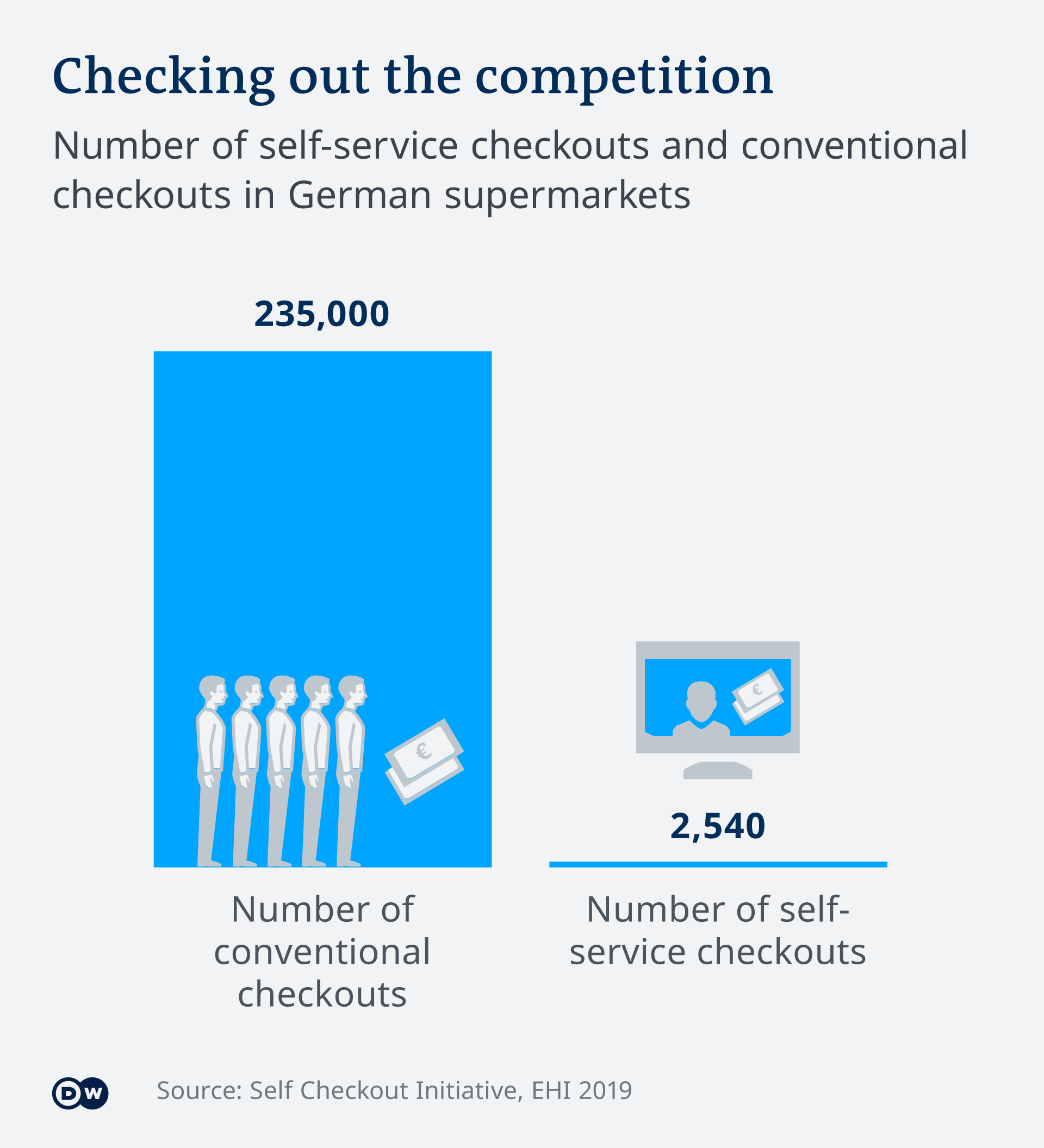 In the UK, self-checkouts account for one out of every six points of sale in the grocery sector as a whole, with an even higher ratio in major supermarkets. So what could account for this Teutonic technological timidity?

It's not as if the Germans are not thinking about it. In classic German style, there is even a dedicated research institute devoted to the study of SCOs in the country. Run by the EHI Retail Institute, it's called the 'Self-Checkout Initiative.'

Its aim is to "provide comprehensive information about stationary self-checkout systems and mobile self-scanning solutions in order to optimize knowledge and motivation in retail and to increase the usage rate in the industry," according to a statement on its website.

Its project leader, Frank Horst, sees two main reasons for Germany's slower uptake of the technology. The big one is Germans' historical obsession with using cash instead of cards.

"Cash payment modules always make SCO systems expensive, which certainly led to a reluctance to invest on the retail side," he told DW.

The second reason he sees is a natural caution on the part of German retailers to invest in SCOs. "Retailers look carefully to see whether there are any advantages for their customers and customer loyalty," he said. 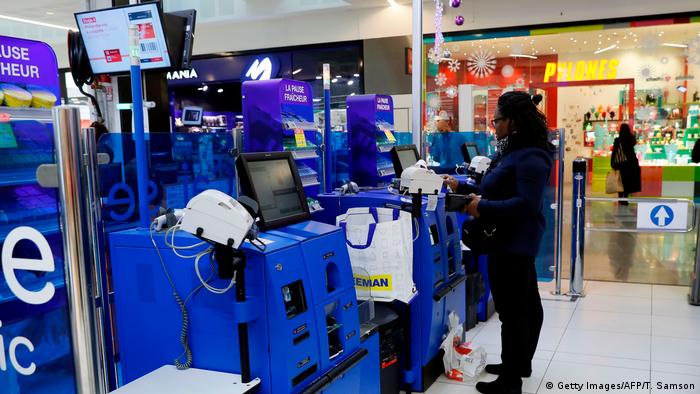 Self-checkouts are common in other European countries, such as France (pictured)

Tom Hutchings from RBR London agrees with both points, pointing out conservative attitudes on the part of both retailers and consumers. He believes there is a "chicken and egg" element in that German consumers are reluctant to embrace the technology when it is so rarely embraced by retailers themselves.

He also points out the historic opposition of discount retailers such as Lidl and Aldi to SCOs, as well as suggesting that there is a "different dynamic" in Germany in terms of relations between management and employees — a reference to the perception that SCOs endanger the jobs of checkout cashiers.

That's one of a number of negative perceptions that many consumers have associated with SCOs over the years. Others include the idea that they increase the risk of shoplifting, lead to less human interactions and create technological confusion — the "unwanted item in the bagging area" effect (a robotic refrain many who have used SCOs will have heard).

"According to our studies, habit is the main obstacle to using the self-checkout and this also includes interpersonal contact at the checkout, which many customers do not want to miss," said Horst.

"But fears of promoting job loss also continue to play a major role, although they are so far unfounded. Mistrust of the technology and a lack of self-confidence also occur, but are of secondary importance. Customers use self-checkout when they see clear advantages for themselves."

Supermarkets slowly get on board

While you may come across an SCO while shopping in Germany, they remain very much the exception. Yet that situation appears to be slowly changing. 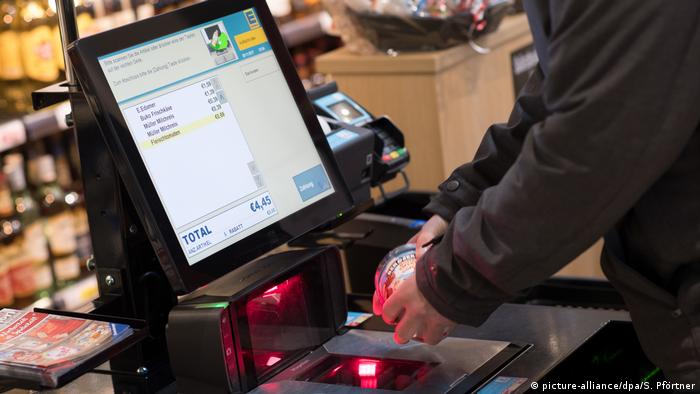 Edeka (pictured), REWE and Kaufland are among the German stores to give the technology a go on a limited scale

A spokesperson for the REWE supermarket group told DW that 120 out of 3,600 REWE stores in Germany now had SCOs. It says it will add more depending on the specific dynamic of a given supermarket.

"At highly frequented locations, for example in large cities, there is often a location-specific high demand from customers for self-scanning checkouts in order to be able to pay for purchases faster and not be in the queue," the REWE spokesperson said. "The feedback from customers is exclusively positive."

A spokesperson for the Schwarz Group, which controls Lidl and Kaufland, said that Kaufland has used SCOs at selected branches for five years and plans to expand their use as a result of positive customer feedback.

More than 100 Kaufland branches employ the tech. However as of yet, Lidl has none. "Lidl is continuously reviewing new service offers," the spokesperson said.

Edeka, which allows independent merchants to run under its brand as franchises, said it could not provide exact numbers of SCOs at its stores due to that model. However, it says it is clear that more and more of its stores are using them due to customer demand. Edeka's subsidiary Netto is currently running an SCO pilot project in around 30 cities and it "has been very positively received by customers."

Germany may never use SCOs as much as its European neighbors for some of the same reasons they shun cashless payment systems, like the desire to remain anonymous while shopping. "Data protection is a valuable asset in Germany," said Horst.

Nonetheless, he believes data showing the high usage rate of SCOs when they are available to shoppers in Germany suggests they will eventually become part of the mainstream shopping experience in the country.

"It is certainly only a question of time and the range of uses until SCO use becomes a learned habit of many customers," he said.

For those shoppers frustrated by their 10-minute waits to pay for that apple or bottle of water, that can only be good news.

Pictures of empty shelves being shared on social media have become a common sight across the world as the coronavirus pandemic spreads. Supermarkets will keep stocking the shelves, but customers must play their part.

Germans reliance on fast food and pre-cooked meals has left them with limited culinary skills when they need them most, a food industry group said. But Germans are flocking to supermarkets and rediscovering cookbooks.