Dutch politician Geert Wilders has proposed exhibiting caricatures of the Prophet Muhammad in the Dutch parliament. The inflammatory suggestion follows a shooting at an anti-Islam event in the US state of Texas. 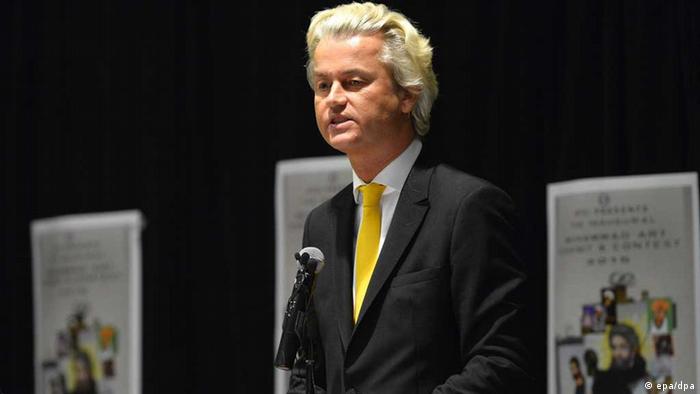 Geert Wilders, who has built his political career on an anti-Islam platform, proposed posting caricatures of the Prophet Muhammad - considered blasphemous by many Muslims - in the Dutch parliament following a shooting in Texas. On Sunday, Wilders, the 51-year-old leader of the Freedom Party, had departed a conference center in the Dallas suburb of Garland shortly after giving a speech critical of Islam and shortly before the shooting started.

"I am going to request parliament to exhibit the same cartoons as those that were displayed in Garland," Wilders told news agency AFP Wednesday. "I want to send a message that if you use violence to suppress free speech, the only effect is that we'll do it even more," Wilders said, adding, "We must show we'll not be intimidated." He concluded: "I don't want to provoke, but at the same time, we must show that we're standing for freedom of speech."

Wilders, who formed his party in 2006, faces charges for discrimination and hate speech in the Netherlands after vowing to reduce the number of Moroccans there. Public prosecutors received more than 6,000 complaints of discrimination after television footage in March 2014 showed Wilders asking party faithful in The Hague whether they wanted "fewer or more Moroccans in your city and in the Netherlands?" The crowd shouted, "Fewer, fewer!" and a smiling Wilders pledged: "We're going to organize that."

Texas police killed two gunmen on Sunday after they shot a security guard in the ankle with an assault rifle in Garland, where the American Freedom Defense Initiative, considered a hate group by US watchdog the Southern Poverty Law Center, had organized a controversial Muhammad cartoon contest. A Garland police officer then shot and killed both gunmen - Elton Simpson and Nadir Soofi, a pair of roommates who had apparently driven from Phoenix to carry out the attack - with his service pistol.

The "Islamic State" claimed that "two soldiers of the caliphate" carried out the bungled attack - the first assault IS has taken credit for in the US. Investigators do not know, however, whether the militant group was in fact directly or indirectly involved.

The Dallas Morning News released a statement from Azam Soofi, the father of one of the shooters, in which he called his child "a model son," adding, "Someone pushed him into this situation."