'IS' claim responsibility for Texas attack

The "Islamic State" group has claimed responsibility for Sunday's armed attack in Texas. The group has threatened "bigger and more bitter" terror strikes. 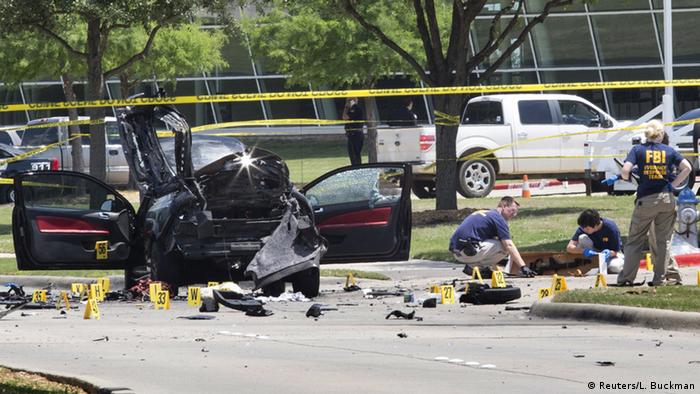 In an audio statement Tuesday, the jihadist group "Islamic State" said that the two gunmen killed in the shooting were "soldiers of the caliphate."

The two men had opened fire outside an arena hosting a contest to draw the Prophet Muhammad. Both were killed by the police before they could enter the venue.

"Two of the soldiers of the caliphate executed an attack on an art exhibit in Garland, Texas, and this exhibit was portraying negative pictures of the Prophet Muhammad," the jihadist group said.

Around 200 people attended the Sunday event and were unaware of the shooting until police came into the building and advised them to stay indoors.

They were later evacuated under armed escort.

"We tell America that what is coming will be even bigger and more bitter, and that you will see the soldiers of the Islamic State do terrible things," the group announced.

It remains unclear whether the group was really behind the attack, or merely claiming it as their own. If confirmed, it would be the first IS attack on American soil.

Several US media outlets identified the gunmen as 31-year-old Elton Simpson and 34-year-old Nadir Soofi, who had reportedly shared an apartment in Phoenix, Arizona.

The alleged attacker Elton Simpson was sentenced to three years' probation in 2011, according to court records. FBI agents had presented the court with taped conversations between him and an informant discussing traveling to Somalia to join "their brothers" in waging holy war.

On Monday, Texas governor Greg Abbott said that the authorities were looking into the "assailants' ties to organized terrorist activity."

On Sunday, the New York-based American Freedom Defense Initiative (AFDI) had been hosting a "Draw the Prophet" contest at the venue to award $10,000 (8,900 euros) for the best cartoon depicting the Prophet Muhammad. They said the contest was designed to promote freedom of expression.

The event was expected to cause outrage among some part of Muslims community, as Islamic tradition considers such drawings offensive.

The Texas contest was attended by the controversial far-right Dutch politician Geert Wilders, who also delivered a keynote at the event.