A man shot dead by police after firing outside a Prophet Muhammad drawing contest was being investigated by the FBI. The intelligence service was following allegations of jihadist sympathies. 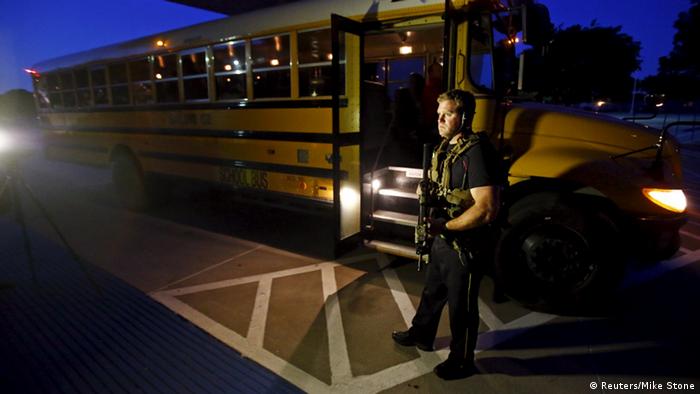 Texas Governor Greg Abbott said on Monday that investigators were looking into the "assailants' ties to organized terrorist activity."

Court records belonging to one of the alleged gunmen, named by US media as Elton Simpson, also showed that he was sentenced to three years' probation in 2011 after FBI agents presented a court with taped conversations between him and an informant discussing travelling to Somalia to join "their brothers" in waging holy war."

The shooting happened just before 7 p.m. local time (0000 UTC) on Sunday in the parking lot of an indoor arena in the suburb of Garland, northeast of Dallas. Police and city officials said the suspects drove up to the building in a car shortly before the the New York-based American Freedom Defense Initiative (AFDI) "Draw the Prophet" contest was over.

A Texas policeman shot the two suspects, however, before they were able to enter the venue.

The two men identified by several US media outlets as 31-year-old Simpson and 34-year-old Nadir Soofi, had reportedly shared an apartment in Phoenix, Arizona.

No one has officially claimed the attack, but terror monitoring group SITE said that a known member of the "Islamic State" (IS) jihadist group had boasted that the attack was carried out by IS supporters.

'No comparison' to Charlie Hebdo attack

Commentators of the gun attack were quick to draw parallels between Sunday's incident and the mass shooting in Paris in January at the headquarters of French satirical weekly Charlie Hebdo. Seventeen people died in the attack over a period of three days.

"There is absolutely no comparison," said Jean-Baptiste Thoret, the magazine's film critic who avoided the January attack.

"You have a, as you said, a sort of anti-Islamic movement [in Texas] ... the problem of Charlie Hebdo is absolutely not the same," Thoret told American public broadcaster PBS.

"We don't organize contests. We just do our work. We comment on the news. When Mohammed jumps out of the news, we draw Mohammed," added Charlie Hebdo's chief editor Gerard Biard.

"But if he didn't, we didn't. We don't... We fight racism. And we have nothing to do with these people."

US police have outlined events that led to two suspected Islamist gunmen assaulting the venue of a contest showcasing cartoons of the Prophet Muhammad. Reports say the pair, killed at the scene, had been roommates. (04.05.2015)