Two people have been killed and a third injured near a contest in Texas to draw the Prophet Muhammad. The event had featured a speech by prominent anti-Islam politician Geert Wilders. 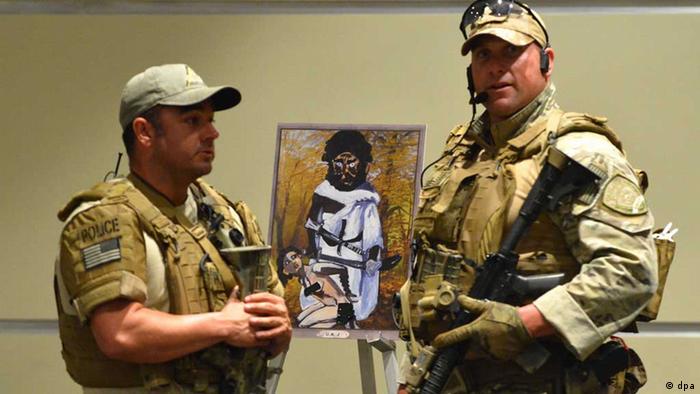 Police shot dead two people who opened fire outside a contest to draw the Prophet Muhammad in the US state of Texas on Sunday. The identities of the attackers are not yet known, nor has it been established whether they were connected to critics of the contest who had called it "anti-Islamic."

The incident happened just before 7 p.m. local time (0000 UTC) in the parking lot of an indoor arena in the suburb of Garland, northeast of Dallas. Police and city officials said the suspects drove up to the building in a car shortly before the event was due to end and opened fire with automatic rifles.

An unarmed security guard standing out the front was struck in the leg. He has since been treated at a hospital.

There were no other reports of injuries.

"The second suspect...reached for his backpack. Of course, officers not knowing what was in the backpack, shot him again. He was killed," he said.

As a precaution, members of the bomb squad were called in to inspect the vehicle, and the area surrounding the arena was evacuated. Around 200 people attended the event and were unaware of the shooting until police came into the building and advised them to stay indoors.

They were later evacuated under armed escort.

On Sunday, the New York-based American Freedom Defense Initiative (AFDI) had been hosting a "Draw the Prophet" contest at the venue to award $10,000 (8,900 euros) for the best cartoon depicting the Prophet Muhammad. They said the contest was designed to promote freedom of expression. Many Muslims consider such drawings an insult to their faith.

Interpretations of Islamic tradition have deemed any physical depiction of the Prophet Muhammad as blasphemous. The Dutch parliamentarian and far-right party leader Geert Wilders, who recently addressed an anti-Islam group in Germany, was in Garland and delivered the keynote address at the event.

In a video posted on the AFDI's website, Wilders vowed to keep fighting to get his opinions heard.

"Our message today is very simple: We will never allow barbarism, never allow Islam, to rob us of our freedom of speech," he said.

AFDI President Pamela Geller said she had planned Sunday's event in response to previous outcries over drawings of the prophet. Geller's group has become known in the United States for using attention-getting tactics to raise awareness for their cause of stopping what they perceive to be an Islamization of the country. Tactics have included buying anti-Islam advertising space on US public transit and campaigning against the building of a Muslim community center in lower Manhattan.

Geller's group has not yet commented on the incident.

Garland's mayor said he had known the exhibition would be divisive.

"There was concern, which is why we had heightened security in the area, but we all swear to uphold the Constitution: free speech, free assembly and in this case perhaps, free religion," he said.

Athas said extra security officers had been posted, and a number of security and SWAT teams had also been in the area.