Why young Japanese are dating less than before

A recent study indicates that fewer young men and women in Japan are going on dates or having sex than in the past, with ramifications for a nation already struggling with a falling birth rate and an aging population. 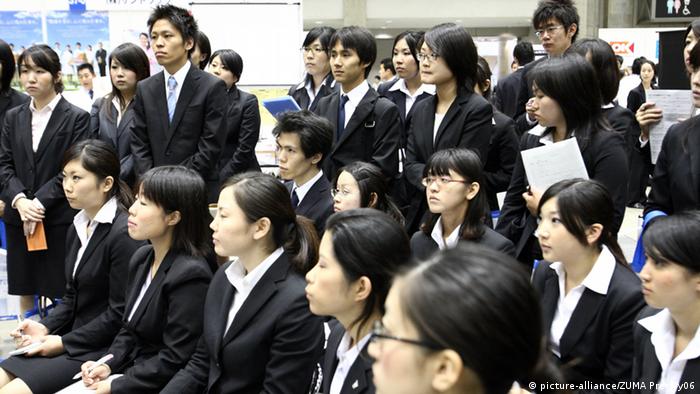 Issei Izawa, a 19-year-old university student, believes that dating is "mendokusai," meaning more trouble than it's worth.

Izawa studies languages at one of Tokyo's top universities, which puts him in a perfect position to seek out potential girlfriends. Instead, he prefers to hang out with his friends or put in the hours at his part-time job so he can buy clothes and save money for his next trip.

"I'm in my first year and I am having a really good time meeting new people, being more independent than when I was at high school and discovering new things," he told DW. "Right now, I don't want to be tied down. I want to be able to do the things that I want to do and I think a lot of people at my university — both male and female — feel the same way."

The latest figures — based on interviews with 13,000 students — are the highest since the association began compiling statistics and make grim reading for a government that is already struggling to get to grips with a declining birth rate and a rapidly aging population.

Japan's population peaked in 2010 at 127.32 million and is presently in a slow but inexorable decline. Analysts believe the total population will fall below 100 million in 2065 and stand at a mere 83 million by the turn of the next century.

Even more worryingly, approximately one-third of those people will be aged 65 or above and will require pensions and advanced medical care, the cost of which will need to be provided by tax income from a shrinking pool of workers.

Thinking that far down the line and the future of the nation is a long way from Izawa's mind.

"I think this generation is very different from our parents, who were looking for a life partner at a much younger age and then would go straight from university into a job and have a family," he said. "That's not what I want and, from talking to people around me, that's not what they want."

Younger women, in particular, are increasingly committed to having a career and being independent. As a consequence, they are marrying far later in life — the late 20s is now typical, as opposed to 25 for their parents' generation — and consequently having their first child in their early 30s. And instead of having two or more children, the cost and need to balance work with raising a child means more couples are electing to only have one child.

And while young men are still perhaps more wedded to the traditional route of a good university leading to a safe career with a company that will take care of them until retirement, there are a growing number who are opting for a more unconventional path. That might include studying and living abroad, working part-time jobs and spending time pursuing their interests — even if that attracts frowns from their own, more old-fashioned parents.

Another significant change that the association's study has identified in the last four decades is just how young Japanese people first meet up; in previous years they met in person in class, in sports clubs or at social occasions. Today, they meet through the internet or smartphone apps.

The ubiquity of pornography available on the internet is also likely to have an impact on young Japanese who are too shy to approach a member of the opposite sex, say experts.

"It's not just young people who are not having sex," said Kyle Cleveland, a professor at the Tokyo Campus of Temple University who lectures on Japanese society. "There have been studies that show that Japanese people in general have less sex than almost any other country measured," he told DW.

"Japanese people are often very socially awkward and have a fear of social interactions," he said, meaning they lack self-confidence and all too frequently revert to conformity, all of which makes dating very difficult.