Why is bullying so vicious in Japanese schools?

In Japan, a student standing out from the rest of the class is a recipe for trauma, with the child more likely to become a victim of intense bullying by the classmates. Bullying cases have now hit a record high. 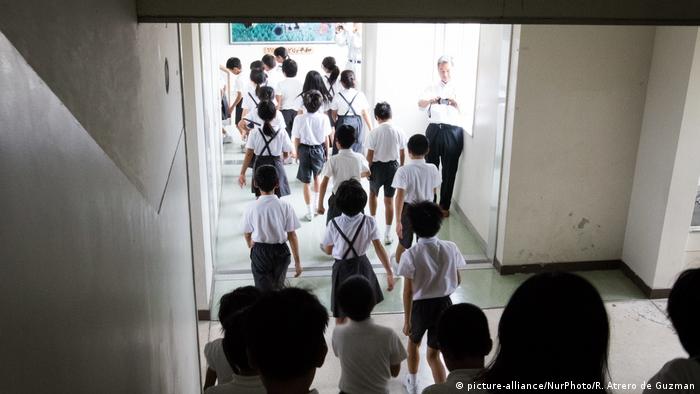 The 15-year-old junior high school student doted on his grandparents, according to his parents, which made the killing of his grandfather and the stabbing of his grandmother on October 18 all the more baffling.

When he was arrested the following day, however, things became a good deal clearer. Although not any less horrific.

The boy, who has not been identified by the authorities because he is a minor, told police that he went to his grandparents' home in Saitama Prefecture, north of Tokyo, to kill them because he did not want them to be ashamed of what he was planning to do subsequently. The boy was planning to go to his school and stab a classmate to death.

The classmate, the boy said, had been bullying him at school and the boy "could not forgive him."

The boy's grandparents have become statistics in a crisis that has long stalked Japanese schools but, as a new study shows, is becoming more acute.

A report released by the Japanese education ministry on October 25 shows that cases of bullying in schools have reached a record high. And the real figure is likely to be even higher, experts warn, as many children are too frightened to come forward and denounce their tormentors.

Recorded incidents of bullying in private and public schools across Japan, from elementary school through senior high schools, were as high as 414,378 in the academic year to March 31, 2018. That figure was up steeply from the previous year, rising by more than 91,000 cases.

Fully 474 cases were determined to be "serious," up 78 incidents on the previous year, and 55 were classified as involving "life-threatening harm." Of the 250 pupils who committed suicide during the school year, authorities were able to conclusively rule that 10 children had been bullied at school; those findings were usually the result of a note being left by the child.

"Japan has always had a problem with bullying in schools, but it seems to me that there have been more children committing suicide that have been linked to bullying, and I think that has made this a bigger issue for schools, for education authorities and the government," said Mieko Nakabayashi, a professor in the school of social studies at Waseda University.

"They are under far more pressure than before to carry out thorough investigations now," she told DW. "These cases are becoming more documented and reported, which may account for the increase in cases, but it is clear that more efforts need to be made to tackle this issue."

A number of prefectural education authorities have implemented measures designed to stamp out the problem, including mandatory surveys each semester for all students on bullying and additional staff meetings to handle situations once an incident is confirmed.

Yet a culture of singling out those who are in some way different is deeply ingrained in children in many societies, Nakabayashi points out, although she concurs that Japan has some unique features.

"Bullying is common in many countries as not all children have been civilized at a young age, but I feel it is different here in Japan," she said. "In schools here, a pupil who is different from the others will be a target. That is the same throughout Japanese society. Conformity is important.

This attitude is so prevalent in Japanese society that there is a saying that sums up how anyone who stands out from the crowd is treated: "The nail that sticks up gets hammered down."

There are other social mores at play, says Nakabayashi.

"The relationships that children have with their parents mean that they are often unable to tell them what they are going through because there is the sense that one must not burden someone else with one's own problems," she said. "Equally, it is difficult to go to a teacher as that might bring even more unwanted attention."

Eric Fior, the owner of a private French school in Yokohama and the father of three sons who have gone through the Japanese public education system, said there is strong pressure to "conform" in Japanese schools.

"My sons have never had a problem with being bullied, as far as I know, but I have heard some stories that would make me very angry if it had involved my children," he said. "Children everywhere can be unkind or rough, but it seems more extreme here.

"Boys tend to be physically abusive and there will be pushing or shoving that can end in a fight, but it's different among girls," he said. "The bullying there seems to be more about excluding a girl from a group or gossiping about her, and that sort of mental abuse can be just as damaging as physical harm."

The education ministry has attempted to put a positive spin on the latest figures, claiming that the 28 percent increase in reported cases shows that teachers are becoming more vigilant about the problem, many of which had previously gone unreported and become more serious.

The shouts of a tuna buyers and sellers kicked off trading Thursday at Tokyo's new fish market, days after the world-famous Tsukiji market was shut down following 83 years in operation. (11.10.2018)

Japan is the birthplace of judo. But the martial art, which is also an Olympic sport, is facing a crisis. A win-at-all-costs mentality is harming its youngest learners. Deaths among children and bullying from coaches have been reported.