Amid a new wave of terror attacks in Pakistan, the country's army has launched a fresh counter-terrorism offensive. But experts say that instead of more military operations, Pakistan needs a change of narrative. 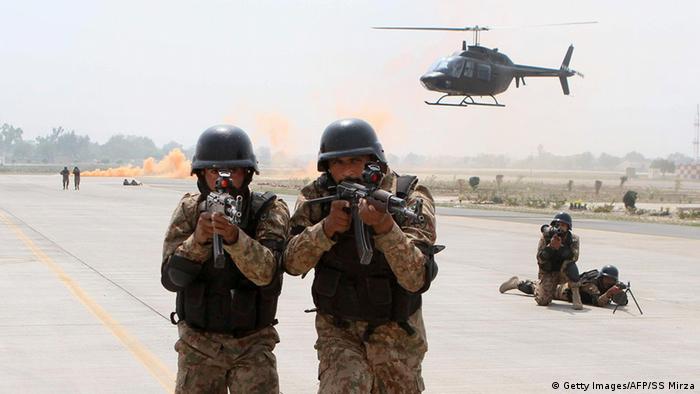 A series of deadly attacks has shaken Pakistan, which has been grappling with Islamist militancy for over a decade. Just ten days ago, a Taliban suicide bomber targeted a rally in Lahore and killed more than 13 people.

On February 16, a jihadist affiliated with the self-proclaimed "Islamic State" terrorist group attacked one of the most beloved Sufi shrines in the southern Sindh province, killing more than 90 people.

Attacks perpetrated by militant Islamist groups are not a new occurrence in Pakistan, but prior to the first Lahore bombing there had been a relative lull in violence in the country. Many Pakistanis attributed it to the efforts of the South Asian country's former army chief, Raheel Sharif. He launched a military operation, called Zarb-i-Azb, against jihadist outfits across the country after the Taliban attacked a school in Peshawar in December 2014, massacring over 140 children.

In a country that makes headlines about Islamist violence, literature festivals are refreshing and much needed. Yet they remain largely an "elitist" affair and have failed to elevate the standard of Pakistani literature. (10.02.2017)

A new report by Human Rights Watch has raised concerns as Pakistani officials are forcing hundreds of thousands of refugees to return to Afghanistan. The United Nations has been accused of being an accomplice. (13.02.2017)

While the Pakistani civil society is campaigning for the recovery of secular activists, a blasphemy complaint has been put forward against the "disappeared" persons. Experts say this increases the risks to their lives. (16.01.2017)

In an interview with DW, Ahmad Waqas Goraya, a blogger who went missing in Pakistan last month, says he has never been involved in any anti-state or anti-Islam activity. He also opens up about his ordeal in captivity. (16.02.2017)

While some rights groups and security experts say that Raheel Sharif's offensive failed to rein in terrorists, supporters of the army claim it significantly reduced the capacity of Islamist groups to launch massive attacks in the Islamic country.

General Qamar Javed Bajwa, who succeeded Raheel Sharif in November last year, has vowed to continue with the military action against jihadist organizations. After the attack in Sehwan on Lal Shahbaz Qalander's shrine last week, he launched a new counter-terrorism operation called "Radd-ul-Fasaad," an Arabic word that translates roughly to "elimination of discord."

A change of heart?

But Bajwa's offensive appears to be more serious and wide-ranging than his predecessor's. For the first time, a military drive covers the central Punjab province, of which Lahore is capital, which is seen by many as a recruiting ground for extremist groups fighting the state and aiding insurgents in Afghanistan as well as in the India-administered Kashmir.

"(The) operation aims at indiscriminately eliminating residual latent threat of terrorism, consolidating gains of operations made thus far and further ensuring security of the borders," said a military statement.

Prime Minister Nawaz Sharif has been reluctant to allow the military to operate in Punjab - Pakistan's most populous province and also the premier's political stronghold - for the reason that it would prove his administration's incompetence in dealing with the issue. Some analysts also say that some members of Sharif's Muslim League party have close ties with banned Islamist organizations and that is why he didn't want the army to interfere in the province.

But even some military critics have praised General Bajwa for his resolve against militancy. The reasons for Bajwa's determination might be both a strong public demand and international pressure. They say that despite a string of deadly attacks, positive signs are also emerging.

The army is finally taking strong action against banned Islamist groups, including Jamaat-ud-Dawa, whose leader Hafiz Saeed is accused of orchestrating the 2008 terrorist attacks in India's commercial capital Mumbai.

"General Bajwa is different from Raheel Sharif in his understanding of the militancy issue. Also, he has no other choice but to act against the terror outfits. Don't forget that Pakistan is facing an enormous pressure from the international community to curb militancy," Khalid Hameed Farooqi, a Brussels-based Pakistani analyst and senior journalist, told DW.

"The good thing about General Bajwa's 'Radd-al-Fasaad' is that it will focus on the Punjab province, which has been spared by other army chiefs. Punjab is a major breeding ground and a supplier of militants to Sindh and Baluchistan provinces."

The analyst underlines that in the past, the army, too, didn't want to include Punjab in its anti-terror campaign because most of its cadre comes from the province. Despite several US demands that Islamabad acts against Punjab-based jihadist groups, the military generals had obstinately refused to comply, Farooqi pointed out.

"Hafiz Saeed had been put under house arrest several times in the past, but this time his detention shows the state's seriousness," Farooqi said, adding that Pakistan needs internal cohesion as well as the support of the international community to put an end to a violent insurgency that has severely harmed the country.

Security experts say that one of the reasons behind the recent surge in violent attacks in Pakistan could be the apparent change of the military establishment's policies. But rights groups are of the view that military operations alone will never eliminate militancy from Pakistani soil. For that, they say, the state has to adopt a narrative that does not support jihadism.

Much of the militancy problem in Pakistan is related to the country's hostility towards India, and if General Bajwa and Prime Minister Sharif could mend ties with New Delhi, that would be more effective in reining in terrorist groups than any army offensive.

Experts say that over the years, thousands of people have been killed in terrorist attacks perpetrated by Pakistan-based Islamist groups, but instead of re-evaluating its own flawed security policies, Pakistan's establishment continues to point fingers at neighboring India and Afghanistan.

The bombings in Lahore and Sehwan were followed by Islamabad's harsh criticism of Kabul and New Delhi, with Pakistani authorities vowing to target insurgents inside Afghanistan.

But the "blame game" is not new in the South Asian region. India and Afghanistan also react to terror attacks by blaming Pakistan and that is how all these countries try to conceal their own shortcomings and responsibilities.

Pakistani PM Sharif and his Indian counterpart Narendra Modi embarked on a peace process in 2014. The two leaders, along with their countries' military leaders, need to reset their ties if they are serious about tackling the militancy issue. A rapidly increasing presence of "Islamic State" in Afghanistan and Pakistan could threaten the stability of the whole region. Military operations won't resolve the conflict as long as a jihadist narrative exists in South Asia.