Why is it so hard to ban a party that preaches xenophobia? | Germany| News and in-depth reporting from Berlin and beyond | DW | 16.11.2011

Why is it so hard to ban a party that preaches xenophobia?

A series of murders allegedly committed by a right-wing extremist network has the German government seeking - once again - to ban the far-right NPD. Banning a political party in Germany, however, is no simple task. 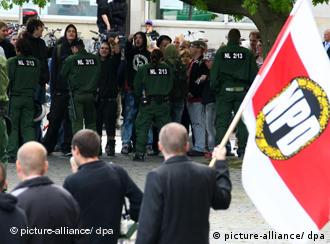 Most of the NPD's members are based in eastern Germany

In Germany, political parties are the expression of a living democracy. After the end of World War II, the founders of the new Federal Republic placed all parties - regardless of political orientation - under special protection. Parties were to enable voters to help shape the government. Germany's constitution, the Basic Law, therefore protects every party, so long as it respects the fundamental democratic order on which the constitution is based.

Accordingly, the federal government is not able to ban a party; the government or a majority in parliament, is only able to apply to Germany's highest court, the Federal Constitutional Court, for a ban.

Only twice in post-war German history has a political party been successfully banned: the far-right Socialist Reich Party (SRP) in 1952 and the Communist Party of Germany (KPD) in 1956. The SRP brought together many right-wing extremists, a few of whom even made it into parliament. This was something which few wanted to see: extreme right-wingers sitting once more in the German parliament. 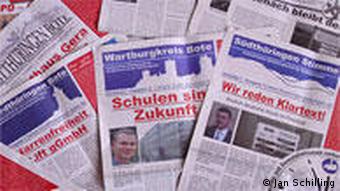 The NPD has flyers and regional newspapers

The KPD was suspected of harboring ties with the regimes in Moscow and East Berlin and, during the Cold War, was seen by Konrad Adenauer's administration as a threat to the nascent West German democracy. Politicians back then mostly wanted to avoid any extremism, with Germany still suffering from the effects of the Third Reich and the East-West division. Even then, it still wasn't easy to have the SRP and KPD banned.

So why is it so difficult today to have a political party holding right-wing extremist beliefs banned once and for all?

Back then politicians weren't as cautious as they are today, say legal historians. The Adenauer administration even put the Federal Constitutional Court under pressure when it wanted to have the KPD banned, it was no problem for the state to have informants and secret agents contribute to investigations of the KPD's activities.

None of the court's justices saw any reason not to accept this evidence; in a relatively short time, the court ruled in favor of Adenauer's proposal and made the KPD ban part of German law.

It was a far different scenario in 2003, when the German government sought to have the far-right National Democratic Party of Germany, the NPD, banned. A number of crimes stemming from the far right had caused the government once again to act. The NPD, which the authorities felt was linked to the crimes, was founded in 1964 and won seats in seven of West Germany's 10 states, meaning that it received at least five percent of the vote. After reunification in 1990, the party enjoyed further success in eastern Germany, but by 2003 the NPD was regarded as an insignificant party with just over 6000 members. By comparison: Germany's two largest parties, Merkel's CDU and the opposition SPD, have around 500,000 members. 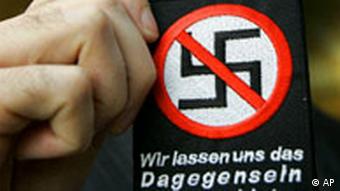 The swastika is forbidden, but the far-right NPD isn't

In 2003, parliament agreed that the NPD should be banned. The proposal was hastily put together, and this time it failed to get through the Constitutional Court. The judges objected to the use by the authorities of informants to glean information on the party's activities. Of the 200 people in the NPD's leading circles, around 30 were paid informers. The court ruled that the party was being steered by outside, by precisely those people who were interested in having it banned. In addition, all evidence gathered by NPD informants was thrown out because the judges said it could have been manipulated after being collected.

The legal standards of the 1950s were evidently no longer valid. By 2003, those standards had developed: democracy was now better protected and there was a clearer division of powers. And for good reason: legal experts insist that it should not be possible for the government to use prohibitions to counteract parties it doesn't like. The constitutional judges were left with no choice; the court rejected the proposal in an embarrassment for the Bundestag, in which all the parties were united in their desire to be rid of the NPD.

Despite the court's rejection of the proposal, however, four of the overruled judges regretted that the court had not investigated the danger posed by the NPD. But such an investigation never happened.

In 2009, Bavaria's state interior minister made another move to have the NPD banned, but Federal Interior Minister Wolfgang Schäuble advised him against it; he was afraid of losing again, since that would have been a victory for the NPD.

Starting points for a ban

Due to the strict rules for banning a political party in Germany, there are only a few courses that could be taken to ban the NPD. The party must be shown to have taken part, supported, or even only suggested supporting the recent murders of Turkish and Greek immigrants. Legal experts have already said there is little chance of proving such a connection. 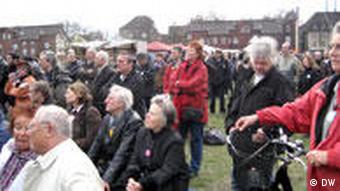 The xenophobic tirades of NPD members are insufficient to justify a ban. Even if most German don't like it, that can be interpreted as free speech. The freedom of speech is protected by the German constitution, as long as it is not insulting to any person.

And in the case of aggressive, criminal behavior by NPD members, the misbehavior of a few is not enough for a ban of the entire party.

"Politics finds itself in a legal straitjacket," say leading constitutional experts in Germany. Attempts to deprive the NPD of its money would be seen as an act of desperation. The party still receives money from the state for each vote it earns in state and federal elections - and for each official member it has - which altogether has given them over a million euros. But this form of state support is available to all political parties voted into parliaments, and they all have to be treated similarly.

If the government moves to ban the NPD, it must provide very detailed arguments - at the very least, more detailed than the ones handed in last time around, in 2003. But this has perhaps begun. Next Monday, November 21, the interior ministers of five of Germany's states are scheduled to meet in Berlin to go over their plans.

A German neo-Nazi organization has been linked to a series of racially motivated attacks, prompting renewed calls for a ban on far-right parties. DW looks back on Germany's ongoing fight against right-wing extremism. (15.11.2011)

For 13 years, a band of right-wing extremists are believed to have carried out murders of immigrants in Germany. Intelligence agencies seem to have been unaware of the background to the murders. How was this possible? (15.11.2011)

Germany is asking questions about role of intelligence services