German security services have come under fire after failing to link a series of murders with a neo-Nazi organization. Government ministers have condemned the attacks amid fresh calls for a ban of far-right parties. 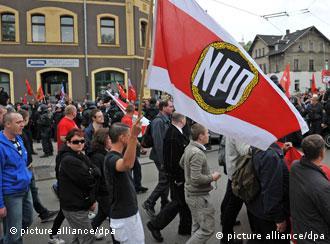 The terrorists have been linked to Germany's far-right scene

German Chancellor Angela Merkel voiced her disgust on Monday after a string of revelations linked a German neo-Nazi organization to a decade-long terrorist campaign.

Speaking in the eastern city of Leipzig, Merkel called the racially motivated murders of nine shopkeepers and a policewoman "shameful for Germany."

"That is a disgrace. That shames Germany. We will do everything possible to investigate it," she said during a speech at a party conference of the Christian Democratic Union (CDU).

The German government now faces difficult questions over how the far-right organization known as the National Socialist Underground (NSU) was allegedly able to carry out attacks spanning 10 years.

German Interior Minister Hans-Peter Friedrich has promised an investigation into failures by the security services in dealing with the organization.

In an interview with the German daily newspaper Bild, Friedrich said "it is deeply troubling that there was no connection made between the series of murders across Germany and the far-right scene in Thuringia," the east German state where the group was based.

"State interior ministers are calling for better coordination between police and domestic intelligence on the state level. I strongly back that," he added. 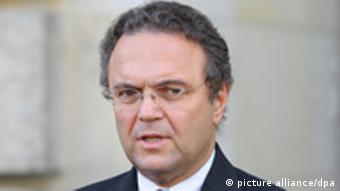 Friedrich referred to a 'new form of terrorism'

Andrea Nahles, general secretary of the opposition Social Democrats, claimed in an interview with DW-TV that authorities have routinely overlooked violent attacks from right-wing organizations. This is proof that "once again public institutions are blind in their right eye," she said.

Extremism expert Bernd Wagner also warned that until now the terrorist threat of right-wing militant groups has been grossly neglected. "Anywhere a Nazi group with propensity to violence exists, there is the potential for the emergence of a violent terrorist cell," Wagner told DW-TV.

Amid the growing criticism, new evidence emerged Monday that suggests members of the organization may also have been behind a nail bomb attack in Cologne in 2004. The bomb was detonated in an area of the city that's home to many Turkish immigrants, injuring 22 people.

The group was also accused of seriously injuring a 19-year old German-Iranian girl after detonating a bomb in her parent's grocery store in 2001.

The recent revelations have given fresh impetus to demands for a ban on neo-Nazi organizations. Merkel joined several other party leaders in putting forward a motion on Monday calling for a fresh look at banning Germany's far-right National Democratic Party (NPD) after a previous attempt in 2003 failed on legal grounds.

Earlier in the day, the interior minister of the German state of Bavaria, Joachim Herrmann, said it was time for a new attempt to ban the NPD. Herrmann called the party "dangerous" and a "threat to the constitution."

Dieter Graumann, the president of the Central Council of Jews in Germany, told the DPA news agency that banning the NPD was "absolutely essential."

"The NPD avails itself of party privileges to enormous advantage. It uses the parliamentary platform to spread its poison and is being subsidized by taxpayers' money," said Graumann.

The chairman of the Green party, Cem Özdemir, also said it was time to "seriously consider an NPD ban."

"We need to talk about the NPD and far-right radicals becoming hegemonical in many parts of Germany; in particular, in the east of the republic," he added.

The shootings of eight Turkish men and one Greek man, which took place between 2000 and 2006, have become known as "The Kebab Murders." 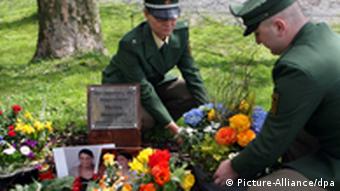 On Sunday, German police arrested a 37-year-old man on suspicion of being connected with the murders and the NSU. Late Monday, an investigative judge issued an arrest warrant for the man, Holger G., saying there was incriminating evidence that he had been aiding the NSU since 2007. A lawyer for Holger G. said he has denied the charges.

The arrest followed a claim by police on Friday that they were investigating a 36-year-old woman charged with arson and membership in a terrorist organization.

Two other male suspects, who lived with the woman, were found dead earlier in the week in a burning camping van in Eisenach, eastern Germany. It is believed the men may have shot themselves after being rounded up by police following a failed bank robbery.

Investigators suspect the arrested individual had been in contact with the trio since the 1990s. It is believed that he had given the alleged terror cell his driving license in 2007 - as well as his passport some four months ago.

It is also alleged that the man had rented camping vans for the three, one of which was used in the attack on police that killed a 22-year-old female officer in the German city of Heilbronn in 2007.

The murders are believed to be the longest wave of right-wing violence in Germany since World War II.

Right-wing extremism an 'infection' that must not be ignored, says activist

The head of a Berlin-based foundation that supports programs against right-wing extremism talks to DW about a new form of far-right terror in Germany, and urges the state to do its job and protect people. (14.11.2011)

A group calling itself the Nationalist Socialist Underground appears to have committed a series of murders and racially-motivated attacks. DW's Editor-in-Chief Ute Schaeffer calls for broad public discourse on the issue. (14.11.2011)

A German neo-Nazi organization has been linked to a series of racially motivated attacks, prompting renewed calls for a ban on far-right parties. DW looks back on Germany's ongoing fight against right-wing extremism. (14.11.2011)

Far-right group tied to a decade of killings