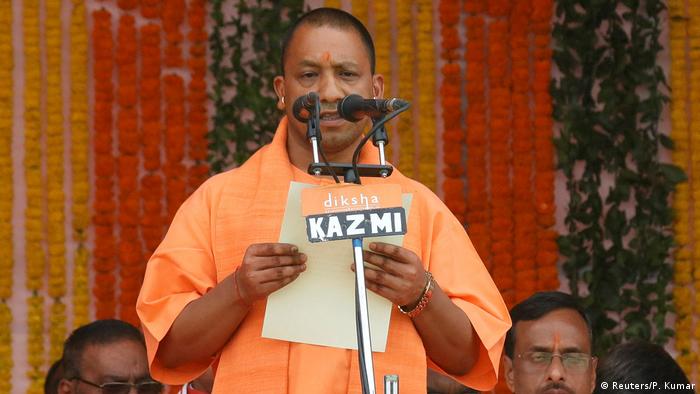 Last week, the chief minister of India's northern Uttar Pradesh state renamed the city of Allahabad to Praygraj and and Faizabad to Ayodhya.

Yogi Adityanath and the ruling Bharatiya Janata Party (BJP), led by Prime Minister Narendra Modi in the federal capital New Delhi, justified the move by saying they were merely reverting to the cities' historical names, which, according to them, were changed by Muslim emperors that governed the Indian sub-continent prior to British rule, which technically began after 1857.

"Ayodhya is a symbol of our honor, pride and prestige," Adityanath said after announcing the new name for Faizabad.

The name change drive is not just restricted to Uttar Pradesh; chief ministers of other BJP-led states are taking similar measures — renaming cities, airports and streets.

The BJP government in the western state of Gujarat is contemplating renaming Ahmedabad to Karnavati. Raja Singh, a BJP state legislator in the southern state of Telengana, recently proposed the name of Bhagyanagar for the state capital, Hyderabad.

In the northern state of Bihar, BJP lawmaker Giriraj Kishore demanded that Bakhtiyarpur be renamed. There have been also been attempts to change the name of Agra, where the famous Taj Mahal is located, to Agravan, or Agrawal. Similarly, Sangeet Som, a BJP lawmaker, wants the name of Muzaffarnagar to be changed to Laxmi Nagar.

Interestingly, almost all cities and other landmarks that have been renamed, or have been proposed to be renamed, have Muslim-rooted names.

Some political analysts claim that the BJP, a Hindu nationalist party, wants to change the names of cities and other historical places only to appease its conservative voters ahead of the 2019 general elections.

The renaming of cities is a common occurrence all over the world, but PM Modi's critics say the ruling BJP's motives are political — that the party is bent on "Hinduizing" India.

Since its inception, the Rashtriya Swayamsevak Sangh (RSS), a Hindu umbrella group that is the ideological inspiration for the BJP, has worked toward transforming India's Hindus from being a religious community into a political constituency. Critics say its aim is to establish Hindu hegemony in a Hindu-majority country, leaving religious minorities out in the cold.

"This is an attempt to undermine India's plural identity. The BJP is appeasing the country's conservative Hindu voters ahead of the 2019 election, but the message they are sending out in the process is deeply prejudiced," Sanjay Srivastava, a sociologist, told DW.

Parikshit Ghosh, a New Delhi-based economist, believes the BJP's name change drive is an attempt to divert attention from the party's governance failure in the past four years.

A number of secular Indian politicians have slammed the BJP's name change spree. They argue that these measures will increase social and political rifts in a multi-ethnic and multi-religious country.

"The BJP's drive is a challenge to India's multi-culturalism, which has dominated the country's social and political landscape since it gained independence from British rule in 1947. The party is unabashedly renaming cities that have Muslim names," Sharad Yadav, leader of the Loktantrik Janata Dal party, told DW.

A compromise on pluralism?

Renaming cities, streets and other historical landmarks, is an ongoing process in India. In many cases, post-independence governments renamed British names to establish a unique Indian identity. But that identity was pluralistic and involved a variety of faiths practiced in India.

"In the past 50 years, at least 100 towns and cities have been renamed. But this time it is being done purely on religious grounds," said sociologist Srivastava.

But Hindu nationalists deny claims that their policies are divisive.

"Our nationalism is about the unity and integrity of our beloved motherland. It is about enlightening the people about the great traditions of 'Bharat' (a legendary Hindu king) and India's cultural heritage. Our aim is cultural unity," said lawyer Raghav Awasthi, a member of the RSS.

Indian liberals accuse the BJP government of deliberately creating rifts between Hindus and Muslims and emboldening right-wing extremists. Since PM Modi came to power in 2014, cases of "cow vigilantism" and Muslim killings by radical Hindus have increased manyfold in the country.

Read more: Why intolerance in India is also an economic issue