The G20 summit is attracting a panoply of protests. DW breaks down the main demos on the streets and waters of Hamburg.

The streets and ports of Hamburg will be unusually crowded at the weekend, as dozens of protest groups emerge to demonstrate against the policies of the world's richest countries. But what are the main demos happening, who is behind them and what do they actually want?

A more militant demonstration is set to kick off in central Hamburg at 4 p.m. Thursday - fittingly, the demo will be centered on the city's anarchist, anti-fascist hot spot, the St. Pauli Fischmarkt. This "international anti-capitalist demonstration" promises to mobilize "to turn Hamburg into a location and an exclamation mark of resistance against old and new authorities of capitalism." 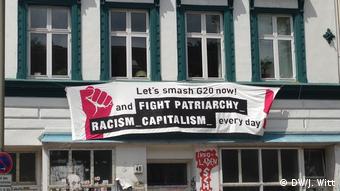 Left-wing demonstrators have planned a series of actions

The protest is likely to see some friction with the police, since the demonstrators are planning to set up an anti-capitalist camp from June 30 to July 9 with enough tents to house hundreds, which police may try to clear. At the moment, there is a legal dispute over whether the camp is covered by the constitutionally guaranteed right to free assembly or not, and therefore whether the local authorities have a right to clear it.

Organizers have also promised to resist any "preliminary checks" carried out by the police ahead of the demo, since they regard these as an "intimidation attempt and an authority demonstration."

At a press conference on Thursday, Welcome to Hell organizers accused police of "criminalizing" the demo before it had even started. "We won't start a street battle," one protester was quoted in the German media as saying. "And if the police don't use every mask or single firework as an excuse for an escalation, the demonstration will finish peacefully."

The protesters gained some reinforcements on Thursday with the arrival of a privately-chartered train (inevitably, with its own hashtag #ZuG20) from Basel, Switzerland, that stopped in a number of German cities along the way, including Frankfurt and Cologne, to pick up what eventually amounted to around 1,000 protesters.

The protest train, which had its own website, logo, banners, sticker, and fliers, was open to any protesters going to any demos in Hamburg.

The new arrivals got a "noisy reception" as they got off the train on Thursday morning, as one German reporter put it:

But the train did not come without some difficulties. Swiss newspaper Neue Zürcher Zeitung reported that the people who boarded the 12-wagon locomotive in Basel on Wednesday afternoon were subjected to "exhaustive" checks by both Swiss and German federal police (who sent some 100 officers across the border).

According to a statement by a legal team representing the activists, the train was delayed by four hours because of the extensive police checks in Basel. The statement said that of the 160 people who attempted to board, 32 were stopped, of whom 24 were given temporary travel bans out of Switzerland, while another eight people missed the train because of the checks. Swiss police said they had an arrest warrant out on one person who attempted to board.

In an unrelated incident, Hamburg police said on Thursday that 10 cars in a Porsche showroom were set on fire. The city's police president, Ralf Martin Meyer, told the ZDF TV network that authorities were working on the assumption that this was an arson attack "associated with the G20, though that still has to be proven."

Around 170 organizations will come together under the motto of the demo "Solidarity without borders instead of G20," planned for Saturday, July 8, at 11 a.m.

Describing itself as a "rejection of this cold and cruel world of global capitalism," the protest will include representatives from both of Germany's main opposition parties, the socialist Left party and the Green party, the trade unions Verdi and IG Metall, a variety of regional peace organizations, as well as a number of other organizations somewhat further to the left, including the German Communist Party (DKP) and the International Socialist Organization (ISO). 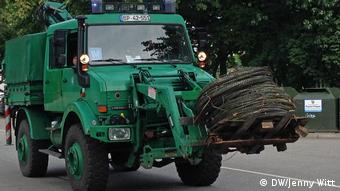 Hamburg police have been getting ready for the G20

The alliance's online "call to action" suggests that the protesters have a wide range of things to demonstrate against: the sealing of Europe's borders to the world's 65 million refugees, the rise of "racism and open hatred," the "indisputable and threatening reality of climate change," and massive inequality in the world.

"On July 7 and 8, those politically responsible for this humanitarian and social disaster want to meet in Hamburg," the call to action reads. "At their annual summit, the heads of the G20 countries talk about 'fighting the causes for migration,' but none of the big countries of origin sits at the table. They talk about 'a partnership with Africa,' but almost the whole continent is missing."

'Shut down the logistics of capital'

On Friday, July 7, an attempt to "symbolically disrupt the smooth progress of capitalism" has been promised at Hamburg's port district of Wilhelmsburg. Exactly what this means is not revealed in the video posted on the "shutdown-hamburg.org" website, but it will probably involve trying to block the port. The intervention is connected to a coordinated protest by the Autonomous Revolutionary Nordic Alliance (ARNA), which is supporting the Swedish Dockworkers' Union (SDU) in a labor dispute in Gothenburg with their employers, APM Terminals.

Some of Germany's leading environmental organizations will also be staging a joint demonstration as part of the "wave of protest" on July 2 - mainly to call on the G20 to step up action against climate change. 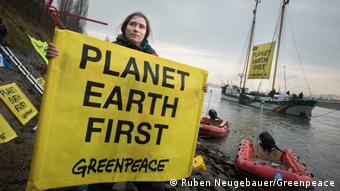 The G20 summit wouldn't be the same without Greenpeace

The protest will involve both a march and a boat demonstration to create a "sea of banners." In their common statement, the groups are also calling on the G20 to make world trade equitable.

The German branch of the global nongovernmental organization (NGO) Oxfam is also planning to be part of the wave. The group says its main demand will be for the G20 to adopt an "economic system for all."

"Central to this is a tax policy that ensures that companies and rich individuals participate proportionately to the community," Oxfam says on its website. Specifically, Oxfam wants the G20 to support developing countries by fulfilling their pledge to set aside 0.7 percent of gross domestic product for development aid.

Police and protesters clash in Hamburg ahead of G20

Some 77 different international NGOs, left-wing political parties, think tanks and trade unions have organized a two-day "alternative summit" in Hamburg on July 5 and 6, a day ahead of the G20, which organizers say "defends a system that boosts social inequality." Over the course of 12 panel discussions, scientists, activists and politicians are to debate different ways to overcome "poverty, exploitation, oppression and the destruction of nature."

One of the main protest groups involved in the Global Solidarity Summit is Attac, an international protest group founded in France that claims it has 90,000 members in 50 countries. The group's French acronym, which translates as Association for the Taxation of financial Transactions and Citizen's Action, hints at its single-issue origins, but now Attac pursues a number of topics surrounding growing inequality and poverty around the world, including the overexploitation of the Earth's resources.

Local Hamburg institutions have chipped in with their help for the protesters too. Chief among these is football club FC St. Pauli, which made 200 sleeping places available around the main stand of its stadium, the Millerntor on Thursday. The club is also allowing demonstrators access to its toilets and shower facilities.

In a statement, the football club, which nurtures a leftist tradition among its fans, said the offer had been a direct response to what it called the "absurd" sleeping ban imposed by police on the official protest camps. The club's managing board said it wanted to "send a clear signal for human rights, freedom of opinion, and the right to demonstrate."

Some churches in the area have made a similar gesture - most notably the Johanniskirche in the Altona-Ost district of Hamburg, which allowed protesters to put up tents on church grounds. "Where else are they supposed to go?" Pastor Vanessa von der Lieth told Der Spiegel magazine. "We saw that the police had cleared a few other protest camps. Our church community agrees that the Hamburg is not only inviting heads of state to the G20 summit. The people who want to take part in the protest also need a place to stay."

Turkish President Erdogan has been denied a request to address a rally of supporters in Germany on the sidelines of the G20 summit. German-Turkish relations have sunk from bad to worse over the past year. (29.06.2017)

Ahead of the G20 summit, protestors have gathered in Hamburg en masse. And they are being quite creative on land, on water and with life-sized rubber figures. (03.07.2017)